Home » Author Posts » The Clockwork Ghost or Who Lives, Who Dies, Who Tells Your Story by Laura Ruby 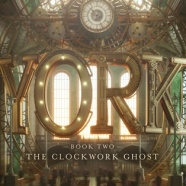 The Clockwork Ghost or Who Lives, Who Dies, Who Tells Your Story by Laura Ruby

Sometime last fall, a friend asked me if I wanted to go to Greece* in April.

But who doesn’t want to go to Greece? 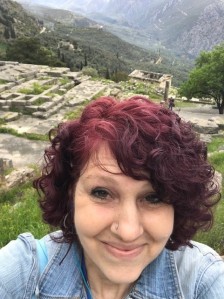 Not surprisingly, Greece is a beautiful country packed with stunning historical sites and gorgeous temples and statues. But when we think of Greek statues, we often think of gods and goddesses hewn from ghostly white marble, the way we’ve seen them in books and movies. And it’s true that Greece’s temples and museums are full of such marble statues. Certain not-fringe-enough groups of people have insisted that this means the Greeks, the inventors of democracy, exalted “whiteness”.

They were full of color.

When art historians studied statues and frescoes with ultraviolet light, they discovered smudges and flecks of pigment.  The statues, it turns out, were elaborately painted and sometimes gilded. 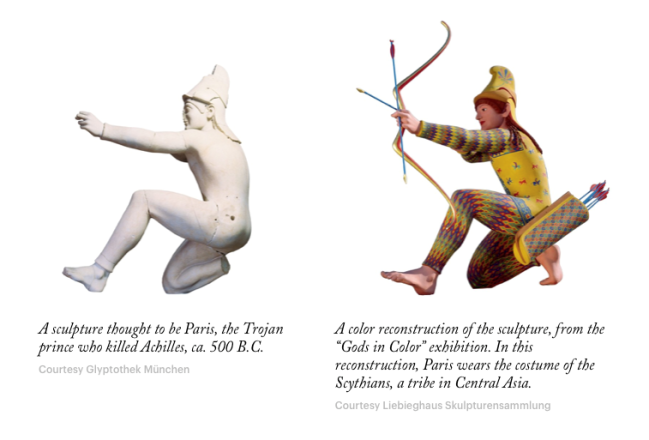 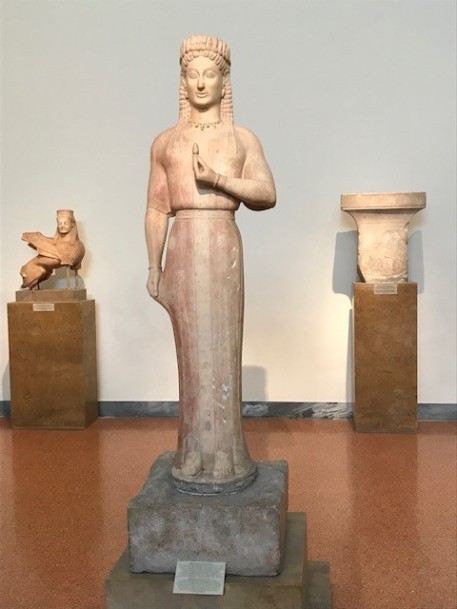 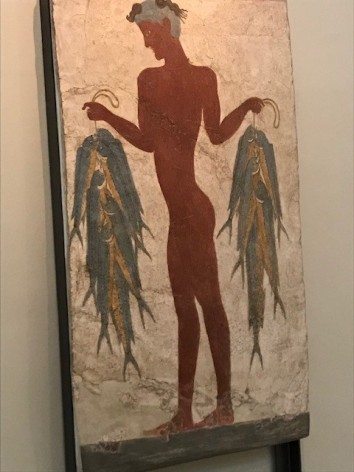 Fresco from the city of Akrotiri, 16th century BC.

Though the fact that a lot of Greek art was decorated is no secret, the myth of the “pure” white marble statues persists, as does the myth that Greeks themselves were pale. Why?

Possibly because of an honest mistake. Thousands of years of weather scoured the paint from statues and other artifacts and architecture. Buried artifacts had pigments brushed away along with dirt, leaving these artifacts ghosts of themselves.

But then, over the centuries, historians used these ghosts to argue that classical artists eschewed decoration because they were western artists, and therefore superior to…well, everyone else. Margaret Talbot, writing in the The New Yorker, said, “In the eighteenth century, Johann Winckelmann, the German scholar who is often called the father of art history, contended that “the whiter the body is, the more beautiful it is,” and that “color contributes to beauty, but it is not beauty.” These white statues were used not only to exalt Greek and Roman art, they were used to exalt white people over other people. This is especially weird since the classical Greeks themselves believed that burnished/dark skin was especially beautiful in men, masculine and strong.

What’s so remarkable about this is that the myth of the ghostly white statue persists despite evidence to the contrary. Ask people what a typical Greek statue looks like, and few would describe gods and goddesses dressed up like movie stars peacocking at the Met Gala. But because the myth plays into our own prejudices, it’s proven stronger than the actual evidence, strong enough to erase history.

A couple of years ago, I published The Shadow Cipher, the first book in the YORK Trilogy. The Shadow Cipher is story about a set of twins who set out to solve an elaborate puzzle in an alternate New York City in order to save their building from a greedy developer.  As the twins, Tess and Theo, and their friend Jaime race around a city populated by robots, hybrid animals, and a whole lot of secrets, they discover that the clues to this grand cipher are hidden in plain sight, tied to people and places that the writers of history wanted to forget.

In The Clockwork Ghost, Book #2 in the YORK Trilogy, Tess, Theo and Jaime continue to try to solve the Old York Cipher once and for all. But they are still wrestling with the ghosts of history, and the people who would rather that history stay buried, or worse, seek to twist history so that the truth becomes impossible to know. Like The Shadow Cipher, The Clockwork Ghost has robots and riddles, hybrid animals and humor, but it is also about who drives the narrative of history and why. In other words—to quote Hamilton—“Who lives, who dies, who tells your story?”

I never thought that the YORK series, a series I’d intended to be a fast-paced and fun diversion, would have so many connections to a lucky trip to Greece, and so much relevance to our own fraught time. But it turns out… it does.

Time may have stripped the bright colors from so many Greek statues, may have deceived generations of travelers and art historians into valuing the wrong things. That deception maybe have been accidental. But the willful perpetuation of the myth wasn’t.  When, confronted by the truth, powerful people chose to look away from a clearer understanding, they made the wrong choice.  They placed their own greed and comfort above the truth.

In YORK, it takes children—with all their curiosity, cleverness, and drive for the truth and justice, to delve into the puzzles of the past and find better answers.  It takes kids to undo the misdirection and deception of their self-serving elders.

Of course, YORK is only fiction. And ancient Greece is…ancient. But perhaps there are lessons that apply to our present, the world we’re living in today. About how this world becomes a lesser place when we willfully deny the past, and much greater one when we see it in all of its color.

Laura Ruby is the author of The Clockwork Ghost, book #2 in the York Trilogy, Bone Gap and, National Book Award Finalist and winner of the Printz Medal, and the forthcoming YA Thirteen Doorways, Wolves Behind Them All.

*If you’re an educator or writer interested in studying Greek art and history, learning how to use it in the classroom, and traveling to Greece, please go to Teachgreece.org for more information. 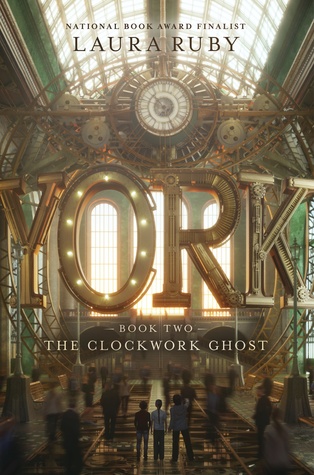 It was only a few weeks ago that the Biedermann twins, Tess and Theo, along with their friend Jaime Cruz, followed the secrets of the Morningstarrs’ cipher further than anyone had in its century-and a-half history—and destroyed their beloved home in the process.

But the Old York Cipher still isn’t solved. The demolition of 354 W. 73rd Street only revealed the next clue in the greatest mystery of the modern world, and if Tess, Theo, and Jaime want to discover what lies at the end of the puzzle laid into the buildings of New York by its brilliant, enigmatic architects, they will need to press on.

But doing so could prove even more dangerous than they know. It is clear that the Morningstarr twins marshaled all the strange technology they had spent their lives creating in the construction of the Cipher, and that technology has its own plans for those who pursue it.

It’s also clear that Tess, Theo, and Jaime are not the only ones on the trail of the treasure. As enemies both known and unknown close in on them from all sides and the very foundations of the city seem to crumble around them, they will have to ask themselves how far they will go to change the unchangeable—and whether the price of knowing the secrets of the Morningstarrs is one they are willing to pay.

For more posts about YORK: THE CLOCKWORK GHOST, please visit:

May 16 The Book Monsters

Like Loading...
← Impossible Heroes by Jess Keating After the Russians Came – Turning my Father’s Story into Fiction by Monika Schröder →