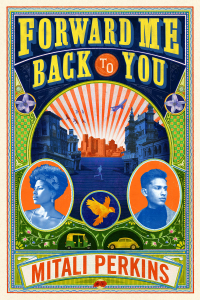 Mitali Perkin’s new novel, Forward Me Back to You, is an epic and layered read of identity and family, similar to her earlier works, such as You Bring the Distant Near and Tiger Boy. The narrative encompasses multiple characters, families and countries, which joins to form a compelling and compassionate story. It is a coming of age novel, as the main characters, Katina King and Robin Thornton, embark on a service trip to Kolkata, India. While there, they discover new truths about themselves, others, and the world.

The protagonists in Forward Me Back to You are searching for their identities and places in the world. Katrina is an outwardly tough teen, a Brazilian Jiu Jitsu  champion. She is biracial, and she and her white mother live as sometimes equals, sometimes not. At the beginning of the story, Katina is suffering from the trauma of an attempted sexual assault. After her school community fails to support her, she leaves her Oakland hometown to live with her mother’s friend in Boston.  This friend becomes Grandma Vee to Katina. The other protagonist, Robin, is a native to India and was adopted by white parents. He has much love and affection for his adoptive family and home, but longs for answers from his birthplace and birth mother. He is also trying to identify the growing feelings he has for his friend Gracie. Shortly after arriving in Boston, Katina meets meets Robin and Gracie at church. Shortly thereafter, they all decide to embark on the service trip to Kolkata.

Forward Me Back to You is also a novel of social justice, as this time in Kolkata is to support survivors of human trafficking. There are not too many YA novels about human trafficking (Sold by Patricia McCormick, Long Way Gone by Ishmael Beah, Tricks by Ellen Hopkins), and Perkins does a skillful job humanizing this hateful circumstance by creating authentic characters and their interactions with one another as well as with Katina and Robin. Robin and Katina’s interactions and reactions fuel the later part of the story, as the American teens grapple to support the survivors. Katina and Gracie take care of the babies of the survivors. Katina goes rogue by trying to teach Brazilian Jiu Jitsu in the group home. Robin, now going by Ravi, attempts to take down a hotel used for human trafficking on his own (he discovers the hotel and the trafficking while searching for his birth mother). The theme of heroism appears- not only in multiple conversations about comic book superheros but also the acts of heroism that are attempted and realized by major and minor characters.  The courage of all the teens in this novel, as well as the empathy, compassion, and action that unfolds, further demonstrate that the youth  can change the world for the better.

You might be hesitant to recommend or book talk this book due to the heavier content of physical and sexual assaults and human trafficking. Don’t be, as human and sexual trafficking is real and worldwide. Human trafficking has become a considerable issue in my city of Portland, Oregon, as well as many other areas of this country. Our students also deserve to read about real topics-even deeply troubling ones. Mitali Perkins handles human trafficking and assault with respect and thoughtfulness, creating complex characters and genuine storylines- no sugar coating here! What you will find is vulnerability, faith, and change. Both the protagonists emerge at the end with some healing, but no fairytale endings. While Katina and Ravi originally took the journey for more self-centered reasons, they leave changed by new perspective and faith. Katina has new hope and allows herself real friendships, and enjoys a measure of justice. Ravi emerges more confident and empowered, and with a girlfriend.

This is also a longer read- 432 pages-but is broken down into short chapters. Each chapter is titled from a main character’s perspective, and changes in location are noted at the start of the chapter. However, it’s such a page turner that once you get going, you aren’t going to put Forward Me Back to You down anyway.

Kacy Smith Paterson supports language arts and literacy in her role as a TOSA (teacher on special assignment) for the Beaverton School District. When not working or reading for sheer pleasure, Kacy gardens and waits on sunny days in Portland, Oregon.

Like Loading...
← After the Russians Came – Turning my Father’s Story into Fiction by Monika Schröder Turning Readers into Writers by Carrie Rodusky →