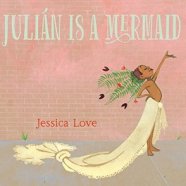 Let me start by saying that I have read and understand the issues connected with the book Julian is a Mermaid. This piece is not written in support or non-support of the book, but rather an explanation of how the topic of the book affected my growth and the thinking of those around me. Julian is a Mermaid is about a young boy on a walk with his grandma, who, after seeing some women in mermaid costumes decides that he also would like to be a mermaid.

I recently saw this quote on Twitter from Kate Roberts, and unfortunately, it described me.

The fear was ruling me.

As an avid reader, I had read a number of books with LGBTQ characters, some being kid lit books. However, I had not been sharing these books with teachers and I was relatively sure they weren’t reading those types of books aloud in class. This past school year, we began to adjust that.

Our K-2nd grade teachers read Julian is a Mermaid by Jessica Love to their classrooms as part of a “Book Battle,” where teachers get two pictures books that are usually similar in some form or fashion that they would read to the class, and the students would get to choose which one they like best. There were usually displays in the building somewhere, so everyone could see which book was more popular.  Through email, I explained to my colleagues what the plot of the book was, kinda expecting some conversation, but no one said anything. Except for one teacher. Through a text conversation that evening, he told me that he burst into tears after reading the book and had to shut himself in his classroom to calm down before he could leave for the day. Why? Because this was, as he said, “the first time he had seen himself in a book”. And at that moment (after I dried my own tears) I was reminded that this is why I purchased the books that I do, so that kids can see themselves in books. I often buy books that have main characters of color or from different cultures, because I know students needed to see themselves (and others) in books. It took me too long to do the same for the LGBTQ community, but Julian is a Mermaid helped me to realize how important that is, and to no longer let the fear rule me.

And for the record, that “fear” of mine was never an issue. No parent complaints, no teacher complaints, no student issues. In fact, the book won the battle in a number of classrooms.

Deana Metzke, in addition to being a wife and mother, spent many years as a Literacy Coach, and is now an Elementary Teacher Instructional Leader for Literacy and Social Studies for her school district. In addition to occasionally sharing her thoughts at the Nerdy Book Club, you can read more of her thoughts about kid lit and trying to raise children who are readers at raisingreaders.site or follow her on Twitter @DMetzke. She is also a member of #bookexcursion.

Like Loading...
← Failure If You Let It: A Tale of Extreme Revision by Laurel Snyder A Reading Life Is Not Linear by Clare Landrigan →