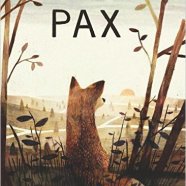 I did it. I judged a book by its cover. I picked up Pax by Sara Pennypacker on a whim, because the cover art had an intriguingly soft, eerily nostalgic quality that sparked a sea of wonderings in my reader’s mind…Is this a story told by a fox?…Why is the fox facing away from me?…I feel like I know that illustration style….What does it mean to be wild or tame?…Can you really be friends with a fox?…I wonder if it’s anything like The Little Prince?…you get the idea. I was on a roll. That last question is really what landed Pax in by book basket, and it has blessed my reader-teacher heart.

One of my favorite young adult texts will always be The Little Prince by Antoine de Saint-Exupéry. If you are the type who checks the reading levels of texts, students as young as third grade can probably read this book and enjoy the whimsical tale of the stranded pilot who meets a Little Prince from outer space who loves his home and his Rose and needs to return to his place in the stars.. But, like many good books, The Little Prince is layered in meaning and metaphor, and can be a critical text for students into their college years- and adults reading The Little Prince can learn a thing or two about themselves and the space they inhabit in this universe as well!

Relationships and identity are the foundational themes in The Little Prince, which makes it a perfect read-aloud to start with my seventh grade Language Arts students. My students spend time analyzing the metaphor of the beautiful story and the implications of the message in their middle school lives. For example, we spend a chunk of community meeting time discussing the baobab trees. If you’ve never read The Little Prince (first of all, you should), the Prince comes from a tiny little asteroid named B-612, and one of his jobs on his little hunk of home is to regularly prune the baobab trees- if left unchecked, their strong, deep roots will take hold and choke out anything else as they take over the asteroid. The danger of the baobab trees gives us a common language to refer to the problems students may face in their early teen years; the baobab trees of our lives can and should be acknowledged and managed. Ignoring anxiety and stress can cause these issues to thrive and consume us. We use the required maintenance of the baobabs to bridge conversations about self-care, self-talk, and resources to support our mental health needs. In reading Pax, I saw similar life-lessons woven into the text, and I read the entire text in one afternoon.

To my delight, I found that Pax reminded me of The Little Prince from the very beginning, but Pax has its own beautiful characteristics that have elevated it as a top text to share with my students this year. Pax opens with the sentence, “Just because it isn’t happening here doesn’t mean it isn’t happening.” From that first sentence, Pennypacker sets the scene for this timeless text: no geographic location or time stamp anchor this text in a specific era- this story could take place in the past, present, or future. The relationships, emotions, and choices are universal. The threat and consequences of war in this story are real and relevant for the children we teach in today’s climate of international strife, displacement, refugees, and children of war-torn societies we Americans can so easily see as “not us, not here, not our concern.” Pax gives readers a chance to be drawn in by a great story, but also to learn empathy and gain understanding as the characters navigate a backdrop colored by war and destruction.

Through Pax, Sara Pennypacker tells the story of a boy and his pet fox. Peter lives with his emotionally distant father, and blames himself for his mother’s death. Pax was the sole survivor of a fox litter, orphaned and taken in by his boy, Peter, as a kit; they developed a bond that can only be understood by one who has formed a relationship with an animal from the wild. If you’ve not had the blessing to form a friendship with a wild animal, there is a balance of trust created and understood at a primal level between human and animal. The human learns to hold this friendship loosely, for the wild is the animal’s true nature and home. But the human must also hold the friendship tightly; to betray the trust of a wild thing can forever sever the intimacy of the relationship. The animal too learns to trust the human while accepting its instinct; for individual humans can be loving and trustworthy, but collectively, humans are a constant threat to the wild. The Little Prince alludes to a piece of this trusting and taming relationship that occurs between boy and beast through the words of the Fox. “To you, I am nothing more than a fox like a hundred thousand other foxes. But if you tame me, then we shall need each other. To me, you will be unique in all the world. To you, I shall be unique in all the world…” (The Little Prince by Antoine de Saint-Exupéry).

Pax is a dual-narrative, told from the perspectives of both Pax and Peter, oriented in an unnamed time and place that is unsettled by war. The dual-narrative approach works well in this novel, and gives strength and power to the voiceless in circumstances of war: in this case, the fox and animals, but this approach alludes to the voicelessness of children who are displaced in areas of conflict. The chapters told from Pax’s point of view bring the human condition under scrutiny in a most basic, even naive manner. In attempting to understand the implications of the approaching war front, the wild foxes Pax encounters educate him. The wild ones explain that some humans fall victim to “war sickness,” a destructive condition which causes humans to turn violent toward one another, much like rabies in the wild. Being at the mercy of “the war sick,” as the soldiers are called in Pax, the animals must navigate the effects of this sickness on the collective ecosystem of humans, animals, plants, and the very earth.

When Peter’s father is called into military service, he forces Peter to return Pax to the wild. Unable to contest his father’s strong-willed decision, Peter follows orders and tricks Pax into staying in the woods as they drive away towards the emotionally distant grandfather’s house where Peter is meant to stay while the father is at war. Peter’s bitter feelings of resentment and abandonment toward his father and his crushing sense of betrayal towards Pax overwhelm him, and he sets out on his own to reunite with Pax. The themes of identity, relationship, man vs. nature, and man vs. man are developed as our protagonist faces adversity right out of the gate. An injury brings him into the private and secluded world of Vola, an injured veteran of a previous war. Vola is gruff and prickly, yet begrudgingly helps Peter in his pursuit of Pax. Used to her own company and way of doing things, Peter disrupts her routine and challenges her thinking. To her surprise, Peter proves to be a teacher to her in ways that are deep and life-changing. Through faith-testing circumstances and gut-checking realizations, Peter is faced with making decisions that have no clear right or wrong answers. Weighing the consequences of his decisions becomes more complicated than he would ever have imagined when placed in the context of a society embroiled in conflict. His experiences in the wild shape his core beliefs about relationships, trust, and love.

Like The Little Prince, Pax is a novel which can be read and loved at face value by students as young as third grade, without any support or interpretation from an overzealous Middle School Language Arts teacher such as myself. This beautiful, heart-wrenching story of a boy and his fox will draw readers of all ages in from the moment they glimpse the cover. Caldecott Award-winning illustrator Jon Klassen stole my heart the first time I read my five-year-old the understated, darkly humorous picture book, This is Not My Hat. Klossen’s illustrations in Pax provide emotional energy and a grounding in nature that helps orient the reader to the meat of the story. The combination of thought-provoking illustrations and fast-paced dual narrative will hook any young reader, and the conclusion will naturally cause a shift in thinking about the connections between humans and one another, humans and animals, and everything in between.

But as a teacher, I crave that deep-dive experience of immersing students in a story that draws them in as a good, relatable story, but then drags them down into the murky and magical depths of the reading experience: I relish those student-driven conversations that hit the marks on the DOK charts without even meaning to…the look on the older students’ faces when they realize that becoming an effective reader doesn’t simply mean reading a book at the highest reading level, but that- no matter the supposed reading level of the text- it’s the thinking, connecting, understanding, and change that occurs in their thinking that elevates their reading success…I need to share Pax with my middle school students as a read aloud and spark these conversations that bridge the story of a boy and his fox to their own adolescent lives. I need my students to get out of their first-world comfort zones and start to look at their world with a critical eye. I need my students to question what they see in the news, on the internet, in the world: right and wrong, good and bad- the world is made up of so much gray area in between, and I need my students to start living in those gray spaces where they can develop empathy and passion for the care and well-being of others. I need books like Pax to drop my students into circumstances they can’t relate to with characters who make them want to relate and motivate them to be agents of change in the world.

Sarah Derringer is a reader, wife, mother of three, and middle school Language Arts teacher in Indianapolis, Indiana. She passionately seeks to instill a love of reading and a passion for words in all those she encounters.

Like Loading...
← Where does change come from? by Marcus Sedgwick  Creating and Maintaining a Classroom Library by Savannah Campbell →