“Tell me what you eat, and I will tell you what you are,” stated French politician and gastrome Brillat-Savarin. Food keeps us alive, but it also represents our culture, values, and history.  America’s food culture is expanding, and food is connecting us among our cultures, values, and histories. Whether you have a little kitchen helper or a high schooler off to culinary school, here are some book ideas.

Dumpling Dreams: How Joyce Chen brought the Dumpling from Beijing to Cambridge by Carrie Clickard, illustrated by Katy Wu

The older among us might remember Joyce Chen’s cooking show. Born Liao Jia-ai in Shanghai, she learns to cook as a young girl. As an adult, Chen and her family leave China and settle in Massachusetts, where Chen opens a restaurant. Through her cookbooks and television show, Chen introduces Chinese cuisine to a broader audience. Bright colors and rhyming couplets make this an enjoyable and enticing book for young children.

Eight-year-old Jasmine loves everything about New Year’s Day, her favorite holiday. The only thing she doesn’t love is the rule that making mochi is reserved for ten-year-olds and older. Humor, determination, and a very large hammer figure into Jasmine’s holiday plans. A relatable story for anyone who wasn’t born first! 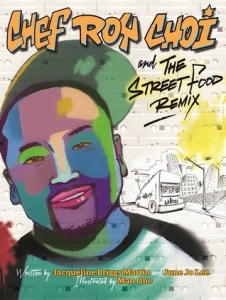 by Jacqueline Briggs, illustrated by Man One

It’s hard not to love this book, with graffiti and vivid art as a background to the story of LA chef Roy Choi. Choi was first  known for Kogi, his Korean BBQ trucks, and soon other restaurants followed. His career remixes different cuisines, high-end restaurants with food trucks. All for “feeding goodness to the world.”

This 12-book series, written by a mother and daughter, focuses on the adventures of elementary grade girls in the Peace, Love and Cupcakes Club.  New kid Kylie starts the baking club, hoping to find friends. The social and family lives of the club members (sprinkled with recipes) recur throughout the series.

Leonora Logroño was frustrated already, being left out of the preparations at her family’s bakery for Día de Los Muertos. Then she discovers her entire female family are all brujas- witches! Since Leonora is barred from the cooking and magic with family, she decides to try some on her own to help out her friend. Delicious flying pigs make an appearance. 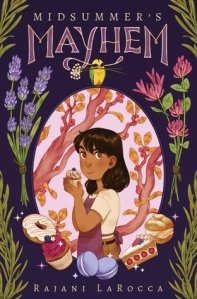 An ambrosial retelling of A Midsummer Night’s Dream, featuring Indian-American Mimi, a young striving baker in a family of standout siblings. When her family’s lives and loves inexplicably turn chaotic, Mimi tries her best to help, even while competing in a baking competition at a mysterious new bakery. Her creations are enchanting to her friends and family in surprising ways.

Chew on This: Everything You Don’t  Want to Know about Fast Food  by Eric Schlosser

Adapted from Eric Schlosser’s Fast Food Nation, this book provides a sometimes disturbing, sometimes disgusting, but always engaging look at fast food’s invasion of schools as well as the health of its customers. A terrific choice for the social justice reader. You will put down the chicken nugget.

North of Happy by Adi Alsaid

Carlos Portillo is leaves his Mexico City home when his brother, Felix, is killed. Carlos decides to visit a renowned Seattle-area restaurant, guided by his own food passion and the ghost of his brother. While there, he falls for the daughter of the head chef, and decides to take a job as a dishwasher. In the frantic life of a restaurant kitchen, ambition, love, grief and magical realism are as vivid as the food. 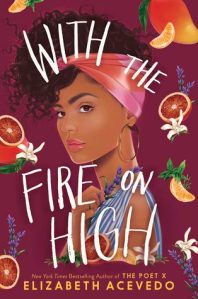 With the Fire on High by Elizabeth Acevedo

Emoni Santiago is a Philadelphia native, aspiring chef, and single teen mom. She balances her schooling, motherhood, and work, and still has the energy to create in the kitchen. When her school offers a culinary arts class with study in Spain, Emoni has a choice to make. Elizabeth Acevedo’s second novel offers a nuanced and deep portrayal of young motherhood, friendship, family, and food.

Bloom by Kevin Panetta and illustrated by Savanna Ganucheau

Complex emotions, complex flavors, and the complexities of coming of age season this graphic novel. Ari has one foot out the door of his family’s bakery, and so hires his replacement in culinary student Hector. As the summer progresses, the two grow close over baking and business. Dreams of the big city, family issues, and the running of the bakery tangle the relationship. A realistic love story with beautiful, simple artwork.

Kacy Smith Paterson is a K-12 Language Arts and Literacy TOSA (teacher on special assignment) in Portland, Oregon. Cooking with and for her family and enjoying Portland’s ever changing food scene takes up a lot of her time. She has no complaints.

Like Loading...
← A Post for National Dumpling Day by Kat Zhang, author of Amy Wu and the Perfect Bao Learning How to Navigate Feelings by Tom Percival →