Home » Author Posts » PRIVATE: DO NOT READ THIS! The Magic of a Secret Notebook by Jamie Michalak

PRIVATE: DO NOT READ THIS! The Magic of a Secret Notebook by Jamie Michalak

What do all of these people have in common? They’ve all carried a pocket or secret notebook.

Agatha Christie went through 73 secret notebooks. Beatrix Potter wrote in hers using a secret code. Comedians carry pocket notebooks to jot down funny conversations and observations. Artists and inventors use their notebooks to sketch and plan. A peek inside a handwritten notebook is like a peek into its writer’s mind.

On the surface, my new early reader, FRANK AND BEAN, illustrated by Bob Kolar, is about two unlikely friends — a hot dog named Frank and a bean named Bean — who form a rock band. But at its heart, it’s a story about two important tools for creating: quiet and a notebook. Preferably a secret notebook. 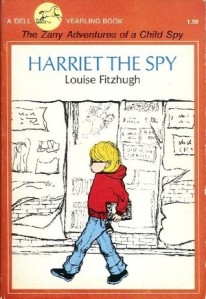 I’ve been keeping a secret notebook since fourth grade, when I first read my favorite book, HARRIET THE SPY, the story that launched a thousand writers. After I read it, I knew exactly what I wanted to be — a spy. Or a writer. It didn’t matter. In my mind, they were the one and the same. Writers pay attention. Writers eavesdrop. And with imagination, writers can make any moment exciting. Even watching Little Joe Curry eat.

My secret notebooks from childhood are filled with funny things my family said, the smell of the school cafeteria, doodles of my neighbors, and top 10 lists in highly specific categories. Like “10 Things I’d Pack If I Ran Away to a Museum.”

After I had children of my own, my secret notebooks became filled with scraps of their conversations. Like these from when my sons, Patrick and Finn, were age 6 and 4:

P staring out the window.

Librarian: “This is a nonfiction book. There are captions everywhere.”

First graders (laughing): “On your shoe? On the ceiling?”

F’s friend River: “My name in Spanish is Rio.”

And since I’m sharing from my secret notebooks, here’s a brand-new entry for your eyes only:

10 Reasons for Kids to Keep a Secret Notebook:

When my youngest was four, he was obsessed with RVs. He wanted to grow up to be a drummer who lived in an RV that he’d sell macaroni and cheese out of. He loved RVs so much that he begged me to take him to an RV show. Here’s what I recorded in my secret notebook that day: 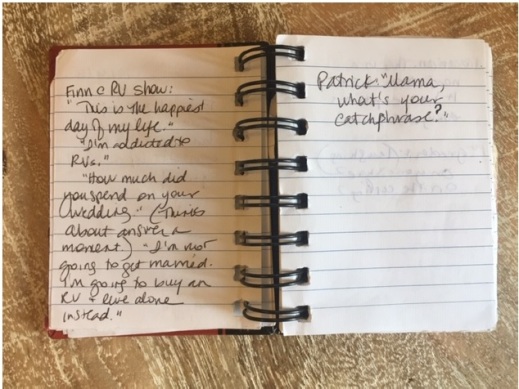 “This is the happiest day of my life.”

“How much did you spend on your wedding?” (Thinks about answer a moment.) “I’m not going to get married. I’m going to buy an RV and live alone instead.”

Even the youngest kids can keep a secret notebook. Here’s my son’s notebook from first grade. His teacher turned notebooks into necklaces, so her students could wear them everywhere.

These notes sparked an idea for a character — an RV-driving drummer named Bean. (Although Bean’s RV became a bus during revisions.) I imagined my oldest son, who enjoyed soft jazz, yoga, and collecting kazoos, as Bean’s sidekick, Frank. And FRANK AND BEAN was born!

My boys have since grown into teenagers. And those secret notebooks, years later, are now secret portals to the past. I can visit those funny little people any time — like I still visit Harriet the Spy — no matter how old I grow.

And that’s perhaps the best magic of a secret notebook.

Jamie Michalak is a children’s book author and former editor. Her nearly forty books include Frank and Bean, illustrated by Bob Kolar, and the Joe and Sparky series, illustrated by Frank Remkiewicz. Kirkus Reviews called Joe and Sparky, Superstars! a “little treasure” in a starred review. She also wrote the forthcoming Dakota Crumb, illustrated by Kelly Murphy (Candlewick Press, 2021).

When not writing, she can often be found singing off-key, drinking too much coffee, or hanging out with her two sons. Jamie was born in Springfield, Massachusetts and grew up in the same neighborhood that Dr. Seuss once lived in. She now resides with her family in Barrington, Rhode Island. Visit her at www.jamiemichalak.com

Like Loading...
← Getting the Hell Out by Rafi Mittlefehldt In Defense of Graphic Novels and Those Who Read Them by Liesl Shurtliff →