Home » Author Posts » The Character That Got Away, or A Requiem for the King of the Dudes by Christopher Healy

The Character That Got Away, or A Requiem for the King of the Dudes by Christopher Healy

Posted by CBethM on November 6, 2019 in Author Posts | Leave a comment

My middle-grade trilogy, A Perilous Journey of Danger & Mayhem, takes place in 1883 America. Okay, not exactly 1883 America, since the real 1883 America did not have robots, flying machines, and transforming motorized aqua-cars. But even with its Jules Verne-esque sci-fi elements, I knew that writing this saga was going to require a lot of research. After all, alternate histories are all the more interesting when they’re based on genuine history.

It was my research that led to many of the most fun elements of Perilous Journey. It was discovering that Alexander Graham Bell had an interest in talking automatons that led to the aforementioned robots getting included in the story. Finding out that the opening ceremony for the Brooklyn Bridge included fireworks shot from hot air balloons is what inspired the scene on the cover of Book 1, A Dastardly Plot. And it was learning that Bell (a character in the books) co-founded the National Geographic Society that sparked the central concept for Book 2, The Treacherous Seas—an expedition to Antarctica.

But sadly, I was not able to find a home in my story for every bit of fascinating trivia I unearthed. The most unfortunate example: Evander Berry Wall, King of the Dudes. First of all, great name. Evander. Berry. Wall. All three words of it are character-naming gold. But even better than his birth name is the one he was dubbed with later in life: King of the Dudes. That’s real! I didn’t even know the word “dude” was a thing in 1883. But it was! And King of the Dudes wasn’t just some nickname that Evander Berry Wall liked to call himself—he was officially dubbed King of the Dudes by the “New York American” newspaper. And he was crowned with this awesome title because he was the best dressed man in New York, a fact which becomes even more amazing when you see how Mr. Wall dressed:

I had unfortunately discovered Evander Berry Wall late in the process of writing Book 1 and couldn’t figure a way to retrofit him into the plot. But I couldn’t just let go of a man who looked like that and was called King of the Dudes. So I stuck a slide about him into my school-visit presentation and shared him with readers anyway. As I told kids about Mr. Wall, I would mention how I was saving him for the sequel. He was too incredible of a character not to use.

Then I started writing the sequel. I doubled back on the King of the Dudes. This was a man who inherited $2 million at the age of 22 and spent it all on “luxuries.” (Reminder: That’s $2 million in 1880s money, probably equivalent in today’s dollars to the GDP of a small nation). However, I’d also been researching Nellie Bly, one of my all-time favorite historical figures, and not only did Bly’s IRL exploits interweave nicely with many of the events and locations in my story, but her intrepid, muckraking spirit fit perfectly among my characters. So I worked Nellie Bly into my tale.

But surely there still had to be room somewhere for Mr. Wall, who proclaimed to always drink champagne instead of water and who had a sartorial rivalry with a man named Handsome Bob. I tried to figure out a place for him. But I discovered that Alexander Graham Bell, already a character in Book 1, had invented the hydrofoil. And that tidbit fit in so well with the Golden Age of Antarctic Exploration, which was looming in the era when my book takes place. I simply had to get that search for the South Pole into the story.

But what about the King of the Dudes, a man who used to have cravats custom made for his dogs, Chi-Chi and Toi-Toi? I possibly could have fit him in if I hadn’t discovered sea spiders and hagfish, two bizarre and nightmarish creatures native to Antarctica that would make excellent horrors for my heroes to face in the icy wastes. I had to put those real animals in there. I mean, the hagfish looks like a cross between an eel and a chupacabra, and spews slime as a defense mechanism. Including them was a no-brainer.

Eventually, I came to the end of The Treacherous Seas and while I loved the story I was able to tell, I had not managed to fit Evander Berry Wall into it. Well, I suppose there’s always Book 3, The Final Gambit, which I’m currently working on. Maybe there will be a spot in that chapter for the dandy Mr. Wall. Although, my research has already turned up Floridian cowboys, swamp settlers, and the mysterious antenna placed atop the Washington Monument, so I don’t know—the King of the Dudes might need to wait for a book of his own. Or maybe he’ll remain a white whale for me, forever haunting the pages of my ideas journal but never strutting his ridiculously overdressed self into a piece of my writing. Other than this one, that is.

Christopher Healy is the author of A Perilous Journey of Danger and Mayhem #1: A Dastardly Plot as well as The Hero’s Guide to Saving Your Kingdom, a New York Times Book Review Editor’s Choice, and its two sequels, The Hero’s Guide to Storming the Castle and The Hero’s Guide to Being an Outlaw. Before becoming a writer, he worked as an actor, an ad copywriter, a toy store display designer, a fact-checker, a dishwasher, a journalist, a costume shop clothing stitcher, a children’s entertainment reviewer, and a haunted house zombie. He lives in New Jersey with his wife, two children, and a dog named Duncan. You can visit him online at www.christopherhealy.com 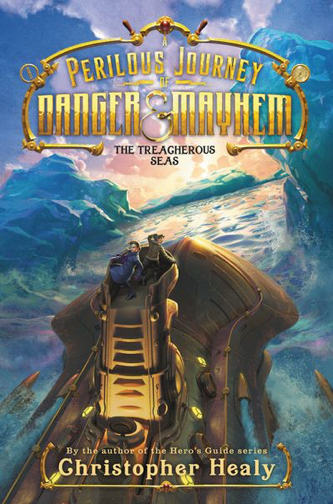 A Perilous Journey of Danger & Mayhem #2: The Treacherous Seas

The second book in the new adventure trilogy from the beloved author of The Hero’s Guide to Saving Your Kingdom.

It is 1883—only a few months after Molly Pepper, her mother, Cassandra,  and her friend Emmett, saved New York from an attack by the megalomaniacal Ambrose Rector while managing to preserve the reputations of Alexander Graham Bell and Thomas Edison, whose technology was manipulated in Rector’s scheme. Their selfless heroism will finally earn them a place in the Inventors’ Guild, alongside the greatest minds of their generation.

Unless, of course, no one knows that they did any of that.

Left with nothing but empty promises and a struggling pickle shop after the government chooses to cover up the crisis, Molly, Cassandra, and Emmett have no idea where to turn—until they learn of a daring expedition to the South Pole, where an meteorite of mysterious power is embedded, and where Emmett’s father, explorer and ship captain Wendell Lee, disappeared years ago.

With the fate of the world hanging in the balance, our heroes commandeer an experimental seacraft to make their play on the pole. But the trip is more treacherous than they realize, and there’s no guarantee that they will return successful—if they even return at all.