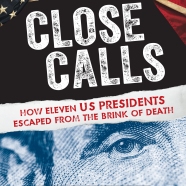 History with a Side of Humor by Michael Spradlin 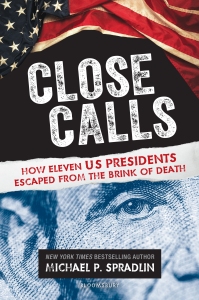 Every writer who writes history for young readers, struggles to make it relatable and relevant.

In my new book, CLOSE CALLS: How Eleven US Presidents Escaped from the Brink of Death, I felt I had some exciting subject matter to deal with. Presidential assassinations have been studied for years. But what about the time the President (or future or former Presidents) literally dodged the bullet?

When you are dealing with a subject that is literally life and death, humor is a fine line to walk. But I found that there is an element of the absurd in many of these events. Even the presidents themselves joked about it. President Reagan was generally praised for maintaining his upbeat sense of humor when he was shot. “Honey, I forgot to duck,” he said to wife Nancy when she reached him in the hospital. Upon informing the crowd at a campaign stop that he had just been shot, Teddy Roosevelt told those gathered, “it takes more than that to kill a bull moose.”

So, I decided to go there. After all, there is a legend that General Washington’s would be assassins tried to poison the actual peas he would eat for dinner. Legend says the plot was discovered at the last minute (it’s always the last minute) and the General’s plate was thrown out the window. There the poisoned peas were set up by chickens who devoured them and keeled over dead. While it’s undoubtedly apocryphal, it has the makings of a good episode of a situation comedy. I can even imagine the father of our country having a good guffaw.

Everyone knows that humor is a great way to draw an audience. I think this is doubly true where young readers are concerned. And this is what I tried to do in CLOSE CALLS. I was part way through a second rewrite when it hit me. The ‘hook’ I was looking for. To use humor when and where I could to soften the rough edges of some potentially deadly situations. I imagined it like this:
“Hey kids! Want to hear about President Carter’s service in the US Navy as a nuclear technician?”

“Hey kids! Want to hear about the time President Carter climbed inside a live nuclear reactor, saved Canada from exploding and had radioactive pee for six months?”

That’s the tenor and tone that I ended up with in CLOSE CALLS. I be waiting and watching to see if it works. And I won’t be eating any peas.

Michael Spradlin is the author of more than twenty children’s books and several books for adults, including the New York Times bestseller It’s Beginning to Look A Lot Like Zombies. His children’s books have been named to state lists in Rhode Island, Indiana, Missouri, Georgia, Vermont, Maine, and Alabama, and best book lists by Bank Street School of Education and the NYPL. He was an Edgar Award nominee for his YA novel Spy Goddess. He lives in Michigan. Visit him online at www.michaelspradlin.com/.

Like Loading...
← The 2019 Nerdies: Young Adult Fiction (Part Two), Announced by a Convention of Nerds Thank You, Aretha by Katheryn Russell-Brown →