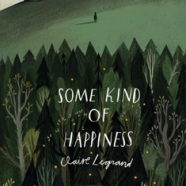 Finding Happiness and other Emotions in Reading by Carrie Rodusky

Posted by CBethM on January 8, 2020 in New Book Reviews | Leave a comment

“If you are afraid, sad, tired, or lonely

if you feel lost or strange

if you crave stories and adventure,

and the magic possibility of a forest path

-this book is for you”

The above lines are taken from the opening pages of Some Kind of Happiness by Claire Legrand.  What an important way to open a story. Think of today’s upper elementary and middle grade students and it would resonate even more.

About one year ago, I read The Cavendish Home for Boys and Girls also by Claire Legrand, and even wrote a review about it for Nerdy Book Club. It is still one of my favorite books – creepy and mysterious with a strong female lead. I recently recommended it to my current fifth graders. A few days later we were practicing reading aloud from independent reading books and a student read a passage from Some Kind of Happiness. He saw the author name and thought it may be similar to Cavendish. Instead, it is so much more.

The passage he chose to read (and which then had me running to the library to get it for myself) was beautiful. It reminded me of the enchanted forest in Bridge to Terabithia. It had childhood innocence as the main character described what she calls the “Everwood.” Upon digging deeper, the Everwood is actually a place of solace and calm for the main character, Finley Hart. Finley is a young girl sent to live with her grandparents for the summer. While this sounds as typical as can be, it turns out that Finley has never met her grandparents, or any of the cousins, aunts and uncles that are part of this extended family. Finley’s parents are going through some issues, and therefore decide that sending Finley to the Hart’s for the summer will help them work through some things while allowing her to meet cousins her age and bond.

In a fairy tale this would be a wonderful idea, but as Finley’s back story begins to evolve, we learn more about the Everwood. It is beautifully woven in the narrative as both fantasy and part of her difficult reality. You see, Finley suffers from panic attacks and anxiety. She mentions that once she tried to tell her parents, but their reactions were less than desirable, so Finley decides this is something she will fix on her own and keep to herself. Enter the Everwood. Finley finds a way to cope with these dark moments of paralyzed fear and anxiety by creating a fictional setting deep in a forest where witches and orphans and a queen (among many other characters) reside. She keeps notebooks filled with these grand stories to help her through her tough times. When she arrives at her grandparents, she is amazed to see the house surrounded by beautiful woods; a real-life Everwood before her eyes. But, much like any fantasy, these woods also have a story, and this story explains her father’s strained relationship (and her non-existent relationship) with this side of her family.

Finley’s cousins eventually become allies in the Everwood and even though they are defying the wishes of their grandparents, they claim these woods as their mystical world – a world that also includes three mysterious boys and their father – a piece to the peculiar Hart puzzle. The children do come together and make-believe play and imagination reign in the mystical land, complete with a hide-away that was once the home of a family who tragically lost their lives in a fire; another piece in this ever-growing list of the Hart’s secrets.

However, despite the nervousness that began the summer, Finley finally feels happy; she belongs to someone and something and she knows she has a pretty good life; but the anxiety and panic and sadness is still there and is overwhelming. Enter a therapist, brought in by her grandparents because they believe Finley is a bad influence on her cousins. They also recognize she is in fact struggling with her parents imminent split which may be a part of the behavior they deem as inappropriate. Unfortunately, Finley is not ready to open up and as more family secrets come out, the Everwood begins to feel like the only place that will help and yet is also being taken from her.

My heart broke for Finley and this family. She was so trying to be resilient and yet really what we learn as the reader is just how fragile this character and this situation really was. Children and young adults today have more anxiety than ever and much like Finley, many think they can fix their problems by themselves. We know everyone is happy on social media, right? What would happen if sadness and real-life were actually posted online? I feel like many of my readers can relate to this character, and as a teacher and mother, my hope is that this magical land of the Everwood, where kids can be kids without being judged, could somehow still be part of or even take the place of Snapchats and Instagram-stories.

There was a resolution with these characters and Finley will get the help she needs, now with an even larger support group behind her. The Everwood did help Finley, and as anyone who’s ever had a secret trail, or covered spot where tree branches and lush green leaves filled the sky with wonder and protection knows, nature can be that connection to calm and tranquility. I did book talk this book with my class, with the preface that it does deal with some serious real-life issues, but I deeply feel that this story could be a start for someone who may feel alone or who is struggling with overwhelming emotions. This story could have been very dark but using the Everwood and the family’s mysteries as parallel storylines, the author shows the reader that anxiety, panic, and overwhelming sadness are sometimes a part of life and do not necessarily define a person – that it is okay to ask for help and to talk about these issues. This is not something to be embarrassed about nor something that needs to be tackled on your own. The Hart family ultimately showed this to be true. I hope that those who read this book will see the beauty and strength in what this character tried to do and did accomplish and can think of a reader in their life who would benefit from this meaningful story.

Carrie Rodusky has been teaching since 1996. She is currently an upper-elementary language arts teacher in a suburb of Cleveland, Ohio. She loves all things reading and can be found out under the trees on a summer day with book in hand. She hopes all kids will identify themselves as readers and still tries with her own teenagers. She will read “Wild” and “The Secret Life of Bees” every year without fail.  You can find her (with almost no posts) on Instagram @carrierodusky