Home » Pay It Forward » A Climb Inside the Window: Why We Need Diverse Books by Kelly Stephan 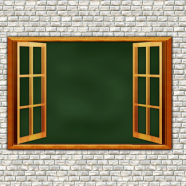 A Climb Inside the Window: Why We Need Diverse Books by Kelly Stephan

It was just another Monday night. I picked up my son from basketball practice…my freckle face boy. He stands out on the court, not only for his sweet basketball moves but for his short stature and red hair. These boys on the court are his people, his team, the friends that have his back. They come from different cultures and economic backgrounds, but on the court, they are one.

We get home late, exhausted from the long day. I am impatient and try to hurry the bedtime routine so we can all just go to bed. But on the way up to his room, my son says, “Hey, I started a new book today”. My librarian ears perked up a bit. He wanted to talk. He wanted to talk about a book. He’s 13. When a teenage boy wants to talk to you, you listen. Brushing teeth could wait.

I can see his eyes start to shine as he begins to tell me about Dear Martin by Nic Stone. I can hear the interest in his voice as he begins to share about how the main character, a black teenager, is misunderstood as he tries to safely get his drunk, white, girlfriend home. This is not what I was expecting. This was a bit more heavy of a conversation than I was anticipating.

I ask him what he thinks about that, and the flood gates open. He starts frantically flipping through the pages, searching for the quotes in the book that he wanted to share with me. The quotes came from a part in the book where the students are having a class discussion around the teacher’s question, “Do you guys feel we’ve achieved full equality with regard to race?”. My son tells me about the argument that ensues in the class around this question. He shares that a white student thought that America was pretty color-blind and how a black student tells him that he is oblivious to anyone else outside of his social group and that he has his head far up his entitled a#@. My son giggles a bit at the bad language in this particular quote but then goes on to explain that he had never thought about it like that before. He shares with me that it might be true that people have more opportunities because of their race, that it’s not about just “pulling oneself up by the bootstraps” as one of the characters states in the book. As the characters in the book have this discussion, my son’s eyes are open to something he never had thought of before. Maybe the world isn’t as equal as he thought. 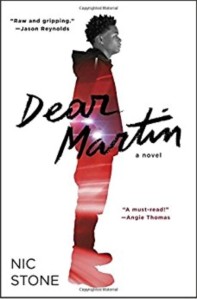 These opinions about race are ones that I believed myself and wanted to share with my child but was not sure how to find the words. Sometimes those words are hard to find.  Dear Martin found the words for me and then showed them to my son in a way that I never could. I am proud as I hear my son’s newfound thoughts and opinions about the world.

This is why we need books that are not only mirrors, and not simply windows to look inside either. This book was a window that my son did not just take a peek in.  He opened that window, climbed in, and came back with something that made him see the world differently. That window will never be closed. His future actions, ideas, and opinions will be a result of an experience he had with a book.

That is big. That is important. That is necessary.

He will be a better person because of what he learned and in turn, will pass his newfound ideas and opinions on to others. This was because of a book.

This is why we need diverse books.

Kelly Stephan is the Elementary District Librarian for Rocklin Unified School District in Rocklin, California and the mom of two voracious readers!  She is a strong advocate for authentic choice in the reading lives of her students and strongly believes that #weneeddiversebooks. You can follow the libraries at RUSD on Twitter at @kellystephan15 or Instagram @rusdreaders.

Like Loading...
← The Books My Students Are Reading by Colby Sharp The Pleasures (and Necessities) of Re-reading by Susann Cokal →