Home » Author Posts » Within the Library Walls by Beth Kephart

Within the Library Walls by Beth Kephart 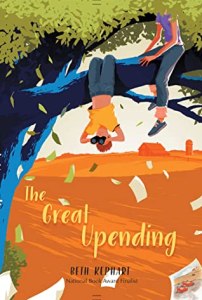 The coil chains of the backyard swing sang along with me: “Kum Ba Yah.” “Chim Chim Cher-ee.” That answer that was blowing in the wind. Singing and swinging, swinging and singing, I brushed the billowed clouds with the soles of my sneakered feet. I soared above the treetops. I flew higher than the birds.

When, one day, the rusty chain snapped, I flew my highest yet. When gravity smashed me back down to earth, I heard my body crack. At the hospital the only doctor who could put the bones of my left wrist back together again was vacationing at the shore. I remember the smell of the beach on him when he finally showed up. I remember the anesthesia swoon when I, from surgery, emerged.

My first cast stretched fingertip to shoulder. My next was a to-the-elbow affair. My subsequent casts were various and many—some fixed, some removable, none of them pretty. Finally, at sixteen, I had surgery again to remove the iceberg of bone that had floated, alone, from the ports of childhood to adolescence.

In between I was banished from contact sports, push-ups, and dodgeball. I’m not sure whose idea it originally was, but whenever my schedule would have sent me off to Gym class, I was to report to the library instead, and not just to read but to work. Stamping Due Date cards. Stuffing Due Date pockets. Rattling along behind the raucous return-book carts and seeking out the books’ Dewey Decimal homes.

My father was an engineer who told us tales about refineries and chemistry. My mother crouched behind the battered couch to put on puppet shows. But the primary stories of my childhood home were the stories that were sung to us from the 33 rpms—West Side Story, Windjammer, Thumbelina, The Music Man, Dumbo. It was in libraries, as a non-Gym kid, that I became a true journey-er in the land of books.

It was also there that I began to observe the stewards of curiosities and dreams—the librarians who always somehow knew, or seemed to know, or took pleasure in helping another search out answers to the questions and the yearnings (some explicit, some not) that showed up at the desk. They knew how to listen. They knew what to ask. They knew where to go.

The librarians thumbed the card catalogs with speed. They mastered the trembly microfiche readers. They knew if the day’s newspapers had already been folded into their shelves or had not come yet or contained news that might be historic. They kept secrets locked in resource rooms, then opened the doors. The librarians sensed, too, when what a young patron wanted most was just to stand at the desk and go on and on about a story they had read.

I was an active kid—more naturally outdoor than in, more creek mud than lace frill, more need to run than to sit. But I’d fallen from the sky and awakened from a chemical sleep and so countless hours of my childhood through adolescence became library hued. I’d like to thank whomever it was who suggested swapping Gym for books, but I don’t where to turn with my thanks. I just know that the decision helped chart a life that I do not, even now, fully understand.

I’ve never written a book without some library help. I help others now write their own stories in quiet library rooms. And though I once wrote a middle-grade novel that rendered unto a librarian heroine status (Nothing but Ghosts), it was time, I thought a few years ago, to thank librarians once again, and newly.

And so, into the pages of my new middle-grade novel, The Great Upending, I slipped a librarian named Mrs. Kalin who does her magic in a small agrarian town. Her library occupies a single room, but to anyone with an imagination, that one room constitutes a wide and lovely world. Mrs. Kalin keeps farmer hours, and when Sara and Hawk, a sister and brother on a secret mission, show up one day, Mrs. Kalin watches her young patrons with great capacity and care. She listens with deepest interest. She suggests, in quietest terms. The Great Upending ultimately turns on the consideration Mrs. Kalin will give not just to the questions that Sara and Hawk ask, but on the nearly invisible way she keeps her eye on the young adventurers.

Librarians understand the clarifying power of truth and the galvanizing possibilities of good fiction. They understand, as well, that they are stewards. That what patrons want to know may be just the start of things, and that the young are always watching.

Beth Kephart is the award-winning author of more than two-dozen books in multiple genres, an award-winning teacher at the University of Pennsylvania, and a widely-published essayist. The Great Upending will be published in March 2020 by Atheneum Books for Young Readers. More at bethkephartbooks.com.

Get The Great Upending Study and Activities Guide here: TheGreatUpendingSTUDYGUIDE

Like Loading...
← Ten Picture Books to Change Your Reading Life by Angie Moore Small Moments of Joy by Jenn Bishop →