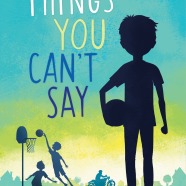 Posted by CBethM on April 7, 2020 in Author Posts | Leave a comment 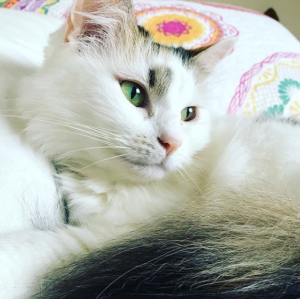 For a brief moment, as I lie on the guest bed alongside my cat, a sunbeam catching each and every one of her glorious white furs, it disappears. The noise, the fear and anxiety, the static in my head that has been buzzing louder and louder every moment since “coronavirus” went from being a word I read in a newspaper article a few months ago to the only word now.

I sink my splayed fingers into the soft fur of my cat’s belly and the hum quiets to a whisper.
It won’t go away forever, I know. But I’m grateful for its momentary absence.
You can have moments of pure joy in times of chaos, tragedy, uncertainty. I knew this intellectually from stories. But now I’m learning it for myself. Emotionally.
A week ago, in my second teletherapy session so far of Ohio’s shelter-in-place order, my therapist asked how I was feeling. The strange thing is, the mere chance to have an extended conversation with a human that’s not my husband is a pretty strong mood-lifter these days. In short, I seemed fine to her. But I told her the truth: up and down.
That’s a common response, she explained, to trauma, to new circumstances. Grief isn’t linear. You can go backwards and then forwards. Up, then down, then up again. 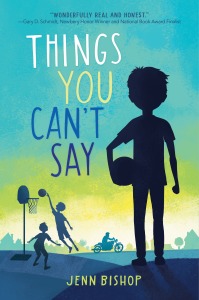 It’s that way for Drew, the twelve-year-old protagonist in my latest middle grade novel, Things You Can’t Say. It published just over a month ago, in early March right before everything as we knew it changed. Drew knows a thing or two about life being one way, and then suddenly, another. As a nine-year-old, he lost his father to suicide, an event which blindsided him. There weren’t signs, as far as he could tell, though even at twelve, he’s still thinking back and looking for them.

Things You Can’t Say is set over the course of one summer in Rhode Island, where Drew has lived his whole life. He spends his weekdays in the children’s room of the public library where he volunteers, helping with story hour and other odds and ends. It’s helped him cope, this routine. Knowing his mom, a librarian, is just upstairs at the reference desk. But when Phil, an old friend of the family he’d never met before, passes through town on a cross-country motorcycle trip and stays a few days with his family, Drew becomes unsettled. He starts reading into his awkward conversations with Phil and has an epiphany just as Phil’s skipping out of town. Could Phil be his “real” father?

It’s a huge question. A life-altering one, if the answer is yes. And so as Drew embarks on finding out an answer via, of all things, interlibrary loan, he keeps some key details to himself. He doesn’t tell his mom his greatest hope (or is it fear?) and he’s not entirely honest with his partner-in-crime Audrey, the new girl in town and fellow if not exactly eager children’s room volunteer. No, with something as huge as this, Drew doesn’t know where to turn, and so he bottles it up inside. And we know what happens when you bottle something up.
Even three years later, there’s an ebb and flow to Drew’s grief. The things he didn’t question as a nine-year-old suddenly hit in a different way. There are new questions.
There always will be.
And yet, he is still a kid.
More mature than others his age, sure. But a kid. There is still so much going on in his life.
An annoying girl who he’s forced to volunteer with at the library, who he butts heads with at first but maybe starts to like. A best friend and neighbor who’s suddenly way, way better than him at every sport, especially basketball. A little brother who needs him.
As much as Drew can’t help but look back, life marches forward. And with it, so does he. There are good days and bad days. Questions and regrets. But small moments of grace and joy, too.
Introducing a new friend to the sweet, mouthwatering perfection of Del’s lemonade.
Helping a little brother build an epic sandcastle on the beach.
Breaking off a chunk of a Snickers to share with someone who could clearly use a piece of chocolate.
Cutting out name tags in the quiet calm of the library at lunchtime.
If you can steal a moment of joy somewhere, amid all of this, hold it tight. And don’t let go.

Jenn Bishop is a former children’s librarian and the author of Things You Can’t Say, 14 Hollow Road, and The Distance to Home. She lives in Cincinnati, Ohio, but would love to Skype or Zoom or Google Hangout with your class, wherever you are. You can find Jenn online at www.jennbishop.com or @buffalojenn on Twitter.