All The Stars for Levine Querido by Maggie Bokelman

In January, back in the Age of Handshakes and Hugs, I was hunting and gathering ARCs at the American Library Association’s Midwinter Meeting in Philadelphia. Not long before that, I’d been reduced to accepting an ARC called . . . drumroll . . . Cooking With Tinned Fish from NetGalley after convincing myself that, hey, I do have pretty broad tastes in both literature and seafood. But at ALA, ARCS were abundant, and I was waddling around hefting bags overflowing with potential award-winners. Already I was stocked with more than enough reading material to last through the quarantine I had no idea was coming.

And then I saw the Levine Querido display.

Levine Querido sounds kind of like an incantation, but it’s actually a new independent publishing company founded by Arthur Levine (widely known as the editor who brought Harry Potter to Scholastic). Levine has a long history of publishing diverse and often debut authors–writers like Kelly Yang, Varian Johnson, and Daniel José Older. 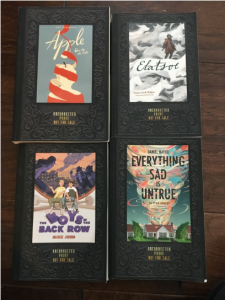 These are the specially designed Levine Querido ARCS.
The top two are marketed to YA; the bottom two, middle grade

If you go to the LQ website, you’ll see that their motto is “Giving Voice to a World of Talent,” and that they focus on publishing “previously underrepresented voices” and “outstanding artists and authors from around the world.”  Between my admiration for Levine and the gobsmackingly stunning appearance of these ARCS, I HAD to have one (and only one–that’s what the sign said, and remember, my bags were full.)  Senior Editor Nick Thomas was on duty, and I asked him to help me choose. We chatted for twenty minutes. I left with all four.

Here’s the part where I confirm that I am NOT employed by Levine Querido and NOT related to anyone who is, because I am telling you, I didn’t just read these four books. I devoured them, savored them, and slobbered all over them like a dog with a porterhouse steak. I’m a school librarian, and nothing makes me happier than reading first-rate, mind-expanding, captivating literature. And that’s what these books are.  They’re the books our kids–our Black and brown kids, our trans kids, our white kids, our indigenous kids, our gay and lesbian kids, our neuro-atypical kids, literally ALL OF OUR KIDS, no matter how they identify (or even if they don’t yet understand the concept of identity), want and need. I give all four books all of the stars I’m allowed to, plus a few bonus stars. They’re fresh, innovative, and fun to read.

Let’s start with Daniel Nayari’s Everything Sad is Untrue: A True Story. Nayari continually pushes readers to reflect on the relationship they have with the author, and the power they have as readers–the power to accept, reject, reflect, and reinvent the text. “What you’re doing now,” Nayari writes, directly addressing readers, “ is listening to me, in the parlor of your mind, but also speaking to yourself. . . You think and wrestle with every word.” (p. 333).  Eric Gansworth also invites active reader participation by encouraging critical thinking about the relationship between perspective and reality.  In his memoir-in-verse Apple: Skin to the Core, Gansworth wonders how well the  “sequences of words I write” and “images I reimagine” actually match the reality he is trying to depict (p. 322). He also includes multiple poems that tell wildly different versions of the same stories, encouraging readers to interrogate the importance of context, form, and viewpoint. In Elatsoe, Darcie Little Badger draws from the conventions of multiple genres while also interweaving Indigenous history and 21st century youth culture.  What emerges is a novel that is simultaneously historical and futuristic; fantastical, but also completely authentic. Finally, Mike Jung’s The Boys in the Back Row is one of the most honest portrayals of middle school I’ve read a looooooong time, addressing head-on the culture of toxic masculinity in a way that’s both gut-wrenching and hilarious. Main character Matt Park notes that “Mom and Dad like to say how it’s ok to cry, crying is healthy, boys need to cry too, blah blah blah, but they don’t understand how dangerous it is to cry in front of other kids, especially other boys”  (p. 67).

Jung’s book makes frequent, obvious use of humor, but it’s important to note that all four books are not only thought-provoking, but also highly entertaining.  Sometimes we pretend that adults are focused on the “educational” aspect of reading, while kids only care about the “fun” aspect, but that’s not true.  Both adults and kids like to learn and they like to be amused; we’re sometimes willing to settle for one or the other, but it’s magical when the two are intertwined.  There’s a scene in Everything Sad is Untrue where main character Daniel, who is accustomed to squatting toilets, has to use the bathroom at a friend’s house, and it would not surprise me if kids recommend this book to one another largely on the merits of this scene. Eric Gansworth and Darcie Little Badger both imbue their works with satire and sarcasm, a brand of humor often appreciated by the older teen audiences these books target.  And The Boys in the Back could arguably be shelved in the “humor” section of a library.

As a school librarian, I am beyond excited to introduce these books to my students, and I look forward to reading more Levine Querido titles.

I never did read Cooking with Tinned Fish.

Maggie Bokelman is a librarian and digital literacy instructor at Eagle View Middle School in Mechanicsburg, Pennsylvania.  She enjoys reading, talking about books, and writing about books, and is lucky enough to work at a school filled with book-loving kids and staff members. She’s also a poetry enthusiast. Maggie has a master’s degree in Children’s Literature from Hollins University, and enjoys attending and presenting at children’s literature and library conferences. When she’s not curled up with a book or at her keyboard, Maggie enjoys pilates and visiting far-flung family and friends. Find Maggie on Twitter @mbokelman, or visit her blog at https://librarianwithaview.wordpress.com.