A HEART IS BORN by Carol Coven Grannick

In February, 2020, I revealed the cover of my debut novel in verse, REENI’S TURN, here at Nerdy Book Club, writing about the struggle to hold on to the heart of the story through years of contradictory input and my own discovery of story and character through the writing, rewriting, re-visioning. The book’s virtual launch on September 13th, hosted by The Bookstall, propelled me to write another part of the story.

I began to write for children just over twenty years ago. At the time, we had a computer that typed in bright green on a black screen, the new phenomenon of “online” discussions with authors meant typing your bright green question into the non-visual chat, and getting a green answer from the invisible guest. No video. One night I participated in a chat with Katherine Paterson.

I had read and loved THE GREAT GILLY HOPKINS and wondered what exactly Katherine Paterson had done that caused me to fall in love with such an apparently unpleasant, angry, rude, and hurtful girl before I even knew how much Gilly was hurting inside. I tried to analyze the opening page, but couldn’t figure it out.

I typed in my question—How were you able to make us immediately love Gilly, with her behavior in the car and nasty thoughts right in the first paragraphs? I waited while the moderator continued speaking, hoping Ms. Paterson would choose my question.

Then she began to type, and these bright green words embedded themselves in my brain: Because I love her.

The first thing I felt, beginner that I was, was a combination of disappointment in the brief phrase that (I thought at the time) included no writing advice. But I also felt a sense of awe that I’d been given a mysterious and wondrous gift that would serve me better than well, if only I became experienced enough to understand it.

I kept the gift with me during the years I learned, read, practiced, revised and revised and revised. I wrote a first novel, poetry, and many picture books. When I set out to write REENI’S TURN in 2008, I knew I wanted a character who was shy, introverted, with a lifelong anxiety about performing in front of an audience, although she was an accomplished ballet dancer. I also knew that I wanted to address the impact of diet culture on young children, underrepresented in middle grade literature, and the stereotypes of non-thin characters. I had lots of information about the character, some of it based on memories of my own and of women who had told me their own stories, similar to Reeni’s. 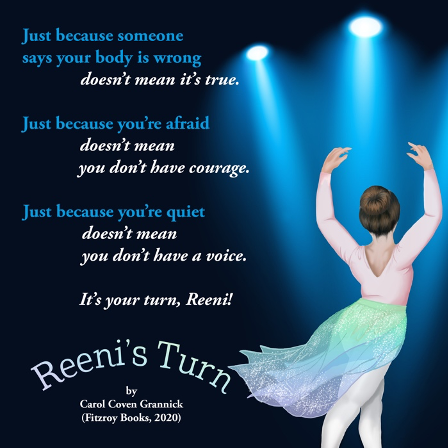 But during a massive revision, I realized I wasn’t feeling anything as I reread my work. The heart of the story seemed tamped down, softened with cotton batting around it, as if I was protecting her from herself. And I sensed that it was because I didn’t know Reeni deeply enough. And because I didn’t know her, I didn’t love her.

I read through the manuscript and realized my language kept me dancing on the periphery of Reeni’s voice. I set to work not only removing qualifying phrases that kept Reeni one step away from her own heart and voice, but allowing myself to sink deeply into the joyful, passionate, and painful memories that added truth to the fiction. It was a challenging, intense, and meaningful time.

And it was the road to having the book become the one I’d dreamed of writing. Now that it’s in the world, I hope Reeni’s heart will touch her readers, just as it touched mine.

Carol Coven Grannick writes novels in verse, picture books, poetry for the very young, and chronicles of the inner life of writers, focusing on resilience. Her work has appeared/is forthcoming in Highlights, Hello, Cricket, Ladybug, and Babybug, and her articles and columns appear regularly in the SCBWI-Illinois PRAIRIE WIND, the award-winning CYNSATIONS Blog, and the GROG Blog. Her guest blog posts appear in numerous online venues, including the Nerdy Book Club. She is represented by Joyce Sweeney of The Seymour Agency.