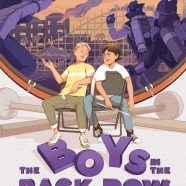 Love and Friendship by Mike Jung

In April 2013 my friend Julie Solleder, who I’d known back in high school as Julie Forte, passed away suddenly from a fast-moving case of leukemia. I hadn’t seen Julie in decades, but around the time I signed my first book contract she was one of the few people I’d known in high school to proactively reconnect with me on Facebook. It felt like a gift, because I’ve always had fond memories of Julie from high school, when we were both in the marching band.

Julie wasn’t the only marching band person I ended up reconnecting with on social media. The names have changed, because people do go on with their lives, but Lauren Covell, the former Stacey Ciullo, and the former Donna Fais regularly do me the honor of liking and commenting on my Facebook posts. I don’t think I ever told the former Emma Bassant how much I liked and looked up to her – she was two years ahead of me, with a dynamic presence that I was a touch awestruck by – but I’m grateful that she was always warm and welcoming to me, and her presence in my FB feed has felt as healing as Julie’s once did. And then there’s Chris.

This being the kidlit sphere, I imagine quite a few of you are familiar with the work of my old friend Chris, a.k.a Chris Eliopoulos, longtime artist and letterer for Marvel Comics, illustrator of the Brad Meltzer-penned Ordinary People Change the World series, author/illustrator of the graphic novels Cosmic Commandos and Monster Mayhem, executive producer of the PBS Kids animated series Xavier Riddle and the Secret Museum, and the creator of my personal favorite of his works, Franklin Richards: Son of Genius. Chris is kind of a big deal, and back in high school, before either of us had built careers as creative professionals, he was my friend.

My high school years felt endlessly traumatizing. I was a shy, artsy, unathletic, introspective boy who was a year younger than my classmates after skipping most of sixth grade. I was Asian American in a predominantly white community, and autistic in a society devoid of autism knowledge. That’s a pretty good laundry list of qualities American society disapproves of in boys, and in the early 1980s version of Hillsdale, NJ, I felt that disapproval with the force of a knee to the head. Bullying wasn’t new to me by then, but the size and ferocity of the boys practicing it in high school felt calamitously new.

I often wish I could say I was one of those spirited, scrappy underdogs who kept getting up and fighting back, even in vain, but I was not. I spent my four years at Pascack Valley High School in a state of constant fear, anxiety, and increasingly deep depression. The only place on the grounds of PV that felt anything like a refuge was the music wing, which housed theater productions, choir, jazz band, orchestra, and most important for me, the marching band.

That was where I met Chris, who became, for a time, my closest friend. Chris was more social than me, with what seemed like an easy rapport with other people – I always admired that about him. I introduced him to the world of comic books, and we spent countless hours reading them, filling sketchbooks with our own drawings of comic book superheroes, and talking about how cool becoming actual comic book artists would be. I even switched instruments, from piccolo to bass drum, so we could spend more time together during his senior year. Then Chris graduated, and we fell out of touch. I was stumbling through the minefield of my senior year of high school, and he was stumbling through the whirlwind of his freshman year of college, and our connection just…fell apart.

I did occasionally look Chris up, so when 2013 and its awful news about Julie came around, I already knew he’d done what I never could. He was working for Marvel Comics!!! He was actually living the dream! And I wasn’t overcome by envy, because I’d signed my first book contract in 2010, so I was living the dream too. Julie’s death was much more of a hammer-blow than I expected, however, so when I saw Chris tweeting heartbroken thoughts about Julie my attention was wholly captured. He said how Julie helped him literally survive high school, and in a moment of atypical clarity, I saw what a meaningful opportunity he’d just provided me.

So I took the leap and replied to Chris’s tweet, telling him for the first time ever that he was one of the people who made my survival possible. And stunningly, miraculously, our long-broken connection healed itself. At long last, I had my friend back. And a few years later when my editor Arthur Levine suggested I write a marching band book, I instantly knew what the heart of that book would be. It would be love; the special kind of love that exists between best friends.

Don’t get me wrong, it was definitely more complicated than that sounds – I still had to write the actual book, which was, as usual, akin to beating my face against my desk while all the hounds of the netherworld howl outside the door. I knew the book would have many layers that would require delicate handling, because the notion of boys openly and vulnerably expressing love is anathema to America’s poisoned ideal of masculinity. I knew my own experiences with deliberately misdirected misogyny and homophobia would still be relevant, because the world is still backhanding us across the face with those brands of hatred. I knew my Asian American protagonist would deal with racism, because that’s never stopped being our reality.

I’ve frequently described THE BOYS IN THE BACK ROW as a book about toxic masculinity, because it is. It’s also a book about racism, homophobia, and misogyny. It’s definitely a book about bullying. However, it’s equally true and possibly more important that the book is about friendship, because Matthew Park and Eric Costa aren’t thinly veiled versions of Mike Jung and Chris Eliopoulos – it’s fiction, you know, I made some stuff up – but they are best friends who’ll do anything for each other, no matter how ill-advised, and refuse to stop being demonstrative and affectionate with other, no matter how much abuse comes their way. They love comics with the white-hot intensity of a thousand suns, which is an appropriate intensity, because seriously, comics! They talk, scheme, banter, crack inside jokes, and laugh. They laugh a lot. I’m told the book is funny, and I’m certainly not gonna argue because that would be so rude…

Matt and Eric are best friends who love each other, and show it. That alone won’t solve our societal ills, all of which are so distressingly obvious right now, but it’s something worth fighting for, celebrating, and if we’re very, very lucky, experiencing for ourselves. Let it be so.

Order a personalized copy of The Boys in the Back Row: https://tinyurl.com/y2unafae

Hey, maybe you could attend my launch party at 4PM Pacific on Tuesday, 10/6/20! It’s gonna be super weird, so save your spot at https://www.crowdcast.io/e/x5tv4m2v

Mike Jung is the author of Geeks, Girls, and Secret Identities, Unidentified Suburban Object, and The Boys in the Back Row, and contributed to the anthologies Dear Teen Me, Break These Rules, 59 Reasons to Write, (Don’t) Call Me Crazy, and The Hero Next Door. His books have been honored by the Bank Street College of Education, Children’s Book Council Reading Beyond List, Cooperative Children’s Book Center, Georgia State Book Awards, Iowa Children’s Choice Awards, Kansas State Reading Circle, National Parenting Publications Awards, Parents Choice Foundation, and Texas Bluebonnet Awards. He’s proud to be a founding member of the #WeNeedDiverseBooks team, and lives in Oakland, California, with his family. Find Mike on Facebook, Twitter, or at www.mikejung.com.

Like Loading...
← Is the Podcast Mightier Than the Book? by Sheela Chari The Mouse Who Loved Poetry by Marcella Pixley →