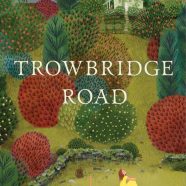 The Mouse Who Loved Poetry by Marcella Pixley

When I was a very little girl, my hero was a small grey mouse named Frederick. Frederick was a picture book mouse. His author had a wonderful, alliterative name that I loved to say out loud. Leo Lionni. Leo Lionni. The syllables were like a yodel that called my tongue to flicker. Every night, I would beg my dad to read me Frederick by Leo Lionni one more time. He would smile, and pull out the hardcover book with the picture of a shy grey mouse holding a poppy. 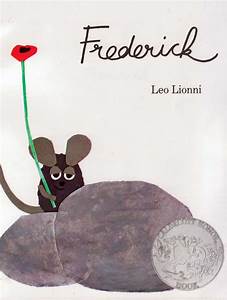 We always began by saying the title of the book and the author’s name out loud together. It was a literary ritual. His voice was always reverent. It seemed like we were calling their spirits into the room. Frederick. By Leo Lionni. So that even now, 45 years later, I can still hear our old voices coming up from the cobwebs. His low, gentle, grown-up’s voice, shy as a mouse, and my child’s voice, high and wondering — calling the picture-book’s magic back into the night-time hush of my childhood room. 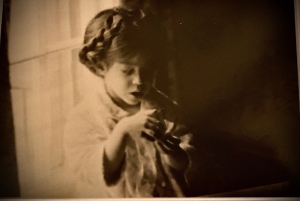 Frederick was the first working writer that I had ever known. When the other mice were hauling winter supplies from the granary to the old, stone wall, Frederick was busy with his imagination. While they worked day and night to drag wheat and corn and nuts into the cracks between the stones, Frederick sat apart from them.

His eyes were closed. He seemed to be dreaming, but he was wide awake. At first, it seemed that Frederick was shirking his responsibilities and turning his back on his community, but it did not take long to understand that there was something sacred about his work. While the other mice gathered physical supplies, Frederick gathered memories and colors and pictures and words. He knew that when it became bitterly cold, when food had grown scarce, and it felt like spring would never come, his family would need poetry to remember there had ever been such a thing as hope. 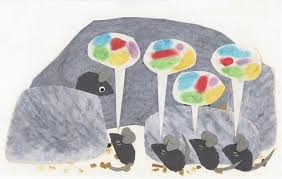 At the end of the book, it is the dead of winter. The mice are shivering and huddled together on the snowy stones where even the dried husks of grain and corn are no more than a memory. There is nothing left to talk about. But then, someone remembers that Frederick had something to share that would help them.  “What about your supplies, Frederick” they ask. Frederick bows his head, reverently. He stands on top of a rock and instructs them to close their eyes. When I was a little girl, I would close my eyes too, so I could hear Frederick describe the blue of the periwinkles, the yellow of the wheat, the red of the poppies and the green of the berry bush. They swirled above our heads like the sweetest dreams. They swirled from the book into my childhood bedroom where I sat beside my father and listened. 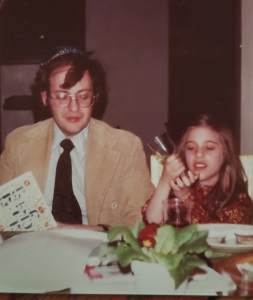 “How did he get them to see those colors?” my dad asked me.

It was almost too wonderful to believe it.

I touched each swirling color on the page. Blue and yellow and green. “He knew what words would make them imagine they were all warmed up.”

“That’s what good writers do,” said my father.  “They warm you up. So we can get through the winter.”

This perfect wisdom was a gift that Frederick and my father gave me in tandem, when I was young enough to believe that words are magical. They set me on the path of becoming a writer, even though I would be a grown woman with children of my own by the time I really understood the true magic of bedtime stories. It turns out, Frederick and my dad were both right. Good writing does have the power to warm us. Even when winter makes us shiver. I was only five years old the first time I learned this lesson. I did not yet appreciate metaphor. I always thought he meant the kind of winter that would make a mouse shiver against the cold. I had not yet had experienced winters of the soul like the one I experienced in April of 2020 when my father passed away.

It was the peak of COVID. We all were staying indoors, washing our hands, trying to stay away from the virus. My father died of the advanced kidney and heart disease he was first diagnosed with in 1975, the same year we first discovered Frederick together, the same year we began the magic of reading out loud. I wonder whether that diagnosis made those evenings even sweeter. A moment of purity and hope despite a year of difficult news.

When my dad finally died, forty-five years later, even though I had been expecting it since I was five years old, the loss was still overwhelming. The whole world seemed to be turning upside down. It was April of 2020. There was racial and political and social and economic unrest all around us. The virus raged each day.  We grieved and shivered against the news. We watched the world grow bleak and still. Sometimes, like Frederick’s brothers and sisters huddled together in that old stone wall, there were times when my family found it hard to remember that there had ever been such a thing as hope.

But then one night, when I was tossing and turning and trying to sleep, I remembered Frederick.  I remembered the sound of my father’s voice reading his story into the snug darkness. I wondered if it would comfort me to read a bedtime story out loud to myself before I went to sleep. I still had the tattered copy of Frederick, that my dad read me all those years ago when I was five years old, and that I had read to both my children.  During those first months of mourning, Frederick helped me find hope again. I surrounded myself with pillows, pulled the blankets up to my chin, propped the book on my lap, and in a gentle, broken, wondering voice, I read Frederick out loud again into the darkness of my grown-up bedroom, my husband nestled beside me in the glow of my bedside lamp. The words and pictures of Frederick were so familiar it almost felt like I was calling my father back into the room. I could almost hear our voices together:  his low, gentle, grown-up’s voice, shy as s mouse, and my high and wondering child’s voice –calling the picture-book’s magic back into the night-time hush of my childhood bedroom so many many years ago. 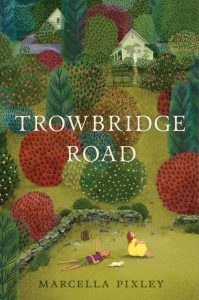 This is the power of poetry. This is why words and images are just as important to our community as physical supplies like stones and nuts and wheat. This is why verses are stronger than walls. Our society needs poetry and poets. It needs readers and it needs writers. Without poems, winter is only literal, and hope can become a thing too far away to imagine or believe. When I was a very little girl, my hero a small grey mouse named Frederick. It was also a man who chose the perfect book, and knew how to inspire the right questions, both when I was five years old, and then again when I was fifty. My love for both of them is boundless. I try to find words to express myself and after almost four pages of typing, I realize that Leo Lionni said it best. My gratitude is as blue as a periwinkle, as yellow as wheat, as red as poppies and as green as the berry bush swirling above the heads of small, grey mice who will never again forget how wonderful it feels to close your eyes and dream while you are wide awake.

Marcella Pixley is the author of three highly praised books for young adults that have received multiple starred reviews, including Ready to Fall. She has been nominated for a Pushcart Prize for poetry and earned a master’s from Bread Loaf School of English at Middlebury College. She teaches writing to middle-schoolers in Massachusetts, where she lives with her family. Her new middle-grade novel Trowbridge Road has been longlisted for the National Book Awards in the Young People’s Literature category.

Like Loading...
← Love and Friendship by Mike Jung On Being American: An Author’s Thoughts On The White House’s Attempt to Curb “Un-American” Conversations by Padma Venkatraman →