Home » Author Posts » What Magical Stories Do by Hayley Chewins

What Magical Stories Do by Hayley Chewins

Magical stories have a superpower: they make the abstract concrete.

In real life, depression, shame and loneliness hold a painful paradox. They are both extremely real and entirely invisible. They shape our reality forever, then slip away from us, evasive.

But magical stories can give depression, shame, and loneliness physical form. These real things are given real dimensions. They can be touched, summoned, eaten, worn like coats and chased like wolves. They are gardens we get lost in. They are secret passages.

Magic gives shape to sorrow in a way that realism can’t. 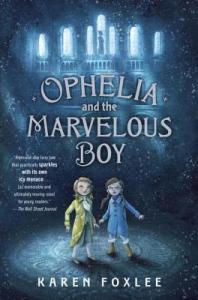 Take Ophelia and the Marvelous Boy, for instance. Karen Foxlee’s masterful novel is set in a deteriorating, snowbound museum. It follows the story of a girl who finds a boy locked away in a forgotten room. The boy needs the girl to help him defeat an evil queen.

But Ophelia and the Marvelous Boy is also about grief.

Ophelia has lost her mother, an author of fantasy books. As a result, she’s sworn off everything magical, and refuses to believe in anything that isn’t grounded in science. The novel traces Ophelia’s journey toward embracing that the world is full of magic—and embracing her grief, too. She has to face the magic—face who her mother was—in order to mourn. The dusty rooms in the museum that Ophelia must venture into are not so different from the rooms in her own mind that she wishes would stay locked.

Cuckoo Song by Frances Hardinge is another example. In it, a girl wakes up after an accident knowing that something is terribly wrong with her. Her journey to discover what’s been done to her—and to reclaim her identity—is as much an inward journey as it is an outward one. Cuckoo Song remains, to this day, one of the most vivid descriptions I’ve ever encountered of what it feels like to be a thirteen-year-old girl.

The thing is, children don’t live in a world without death and guilt and sadness. They live among these things, just as we do. They are trying to process them, just as we are. Anyone who has been a child knows this.

Which brings me to my own writing.

Quite early on in the drafting process, I realized that The Sisters of Straygarden Place was about—among other things—how I felt when I was twelve.

I felt responsible for my younger sisters and terrified of my older one. I was “the good child” and I felt proud of that and also frightened of it—what if I wasn’t really that good?

I felt isolated and ashamed.

I felt excited about growing up and, at the same time, small and helpless and petrified. I felt hopeless. I felt powerless and dangerously powerful.

When I think about how I felt when I was twelve, it’s a murky swamp, all the colors running into one. There’s a lot I can’t remember in detail. And I think that what I’m doing when I’m writing is venturing into that swamp and pulling out one, shiny stone. I’m looking at it and going, “Oh, I recognize this.”

So when I write magical stories, I’m writing about beautiful houses that conjure gourmet dinners, and mysterious illnesses that turn you silver, and tall, sentient grass that scrapes at star-shaped windows.

Magical stories, I contend, are about real life.

Without noticing it, while I was writing The Sisters of Straygarden Place, I made the abstract concrete for myself. I made the unreal real. I made a house to hold all the feelings I couldn’t name.

My hope is that my books will do for readers what Ophelia and the Marvelous Boy and Cuckoo Song have done for me. I hope my books will allow readers to hold the unreal in their hands—to touch it, to talk about it. Maybe even to understand it.

Hayley Chewins is a poet and the author of The Turnaway Girls, in which she “deftly reveals a tapestry of magic, power, and rebellion thread by ethereal thread,” said Kirkus Reviews in a starred review. She grew up in Cape Town, South Africa, in a house full of books, and now lives in Johannesburg, South Africa, with her husband and her poodle.

Like Loading...
← A Grandmother’s Birthday, A Granddaughter’s Gratitude on Pub Day by Victoria Bond The Magic of the ABCs by Michelle Blanchard Ardillo →