COVER REVEAL: Flight of the Puffin by Ann Braden

I’ve always avoided conflict. Every day when I was in preschool, one of the other girls at the dress-up station would tell me, “You can wear the purple dress tomorrow.” I never pushed back. I never told the teacher. I also almost never wore the purple dress. (Except for one glorious day when that girl was absent.) Even as an adult, I avoid tricky left turns because of the pressure from the people behind me.

But back in 2013, with my newborn daughter strapped onto me, I stood at a podium, shaking with nerves, and gave a speech at a press conference about one of the most controversial issues in our country: guns. Because I cared more about finding common ground than avoiding conflict. Because all the yelling back and forth was doing nothing to change the situation. Soon, I was president of a brand-new grassroots organization and heading into absurdly polarized water.

Plunging yourself into the work of listening to two sides argue is its own education. You realize that underneath the yelling and the anger is often the same plea: You don’t understand me. You’re not hearing me. You’re not respecting me. The current divisions in our country are no different. So how will we ever find common ground? How can we stop judging each other?

Stories—good stories—say this to the reader: You are seen. You are heard. You matter. Only when we hear those things will our clenched fists relax.

I have watched what can happen when a child feels seen by a book with The Benefits of Being an Octopus. But honestly, it doesn’t need to be a whole book to affect someone. Sometimes it just takes an index card and some colored pencils.

I’m serious. Stay with me here.

Four years ago, hate speech became more emboldened and public than it’d been in decades, and after a few weeks of sobbing and wringing my hands, I realized something: If regular people were perpetuating most of the hate, then regular people should be able to stop it. When I heard that the Islamic Society in my state had gotten hate mail, I decided we should send them postcards covered in hearts to show them they were loved. They ended up getting five hundred love postcards. That poor little hate message found itself drowned out—by a bigger, more powerful story.

We called ourselves the Local Love Brigade, and we started sending postcards to others who needed love: a nine-year-old girl who had been bullied for being Jewish, another girl dealing with a racist classmate, Syrian refugees resettling nearby, and many others.

Some of the people even wrote back. It was reading those letters that pushed me to recognize the power of what we were doing. And that sometimes one postcard—even from a stranger; sometimes, especially from a stranger—is all it takes for someone to feel seen, to feel heard, to know they matter.

The power of one small act of kindness from a stranger is what inspired my next book, Flight of the Puffin, coming out this May. It’s about four kids living in different parts of the country, and it explores political divides, gender boxes, and how a tiny action can send out ripples you’d never expect. I’m so excited for #PuffinBrigades to sprout up in schools and communities and spread kindness. Keep your eye out for more information about that coming soon.

Today, I am thrilled to be sharing Flight of the Puffin’s gorgeous cover with you. Artist Chanelle Nibbelink’s soaring puffin makes for such an inspiring image.

So, yes, there are deep divides in our country, but there are plenty of things that connect us. And when we take the time to let others know we care—and feel that they do too—that’s when there’s hope.

Here’s to all of us holding on to hope like the glorious, soul-filling sunrise that it is. 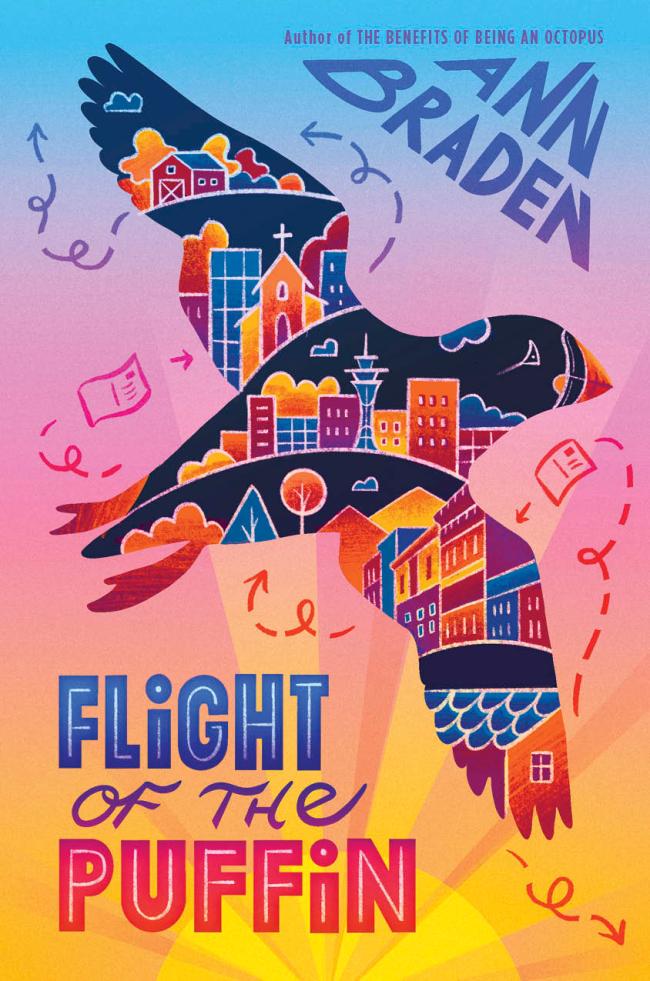 Ann Braden writes books about kids trying to figure out how to be their best selves even when life is hard. Her debut middle grade novel, The Benefits of Being an Octopus, was named one of NPR’s Best Books of 2018, and has appeared on numerous state lists. Ann founded GunSenseVT, a grassroots group that helped pass landmark gun violence prevention legislation. Ann has been a middle school teacher, the co-host of the children’s book podcast Lifelines: Books That Bridge the Divide, and a co-organizer of #KidsNeedMentors. Ann lives in southern Vermont with her husband, two children, two insatiable cats, and a baby tortoise named Petunia.