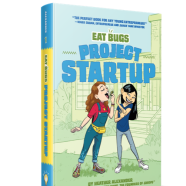 Have you ever eaten a bug? A year ago, I would’ve said, “No way, not me.” Today, I’m a proud member of Team Bug. What happened?

Two amazing entrepreneurs–Laura D’Asaro and Rose Wang–opened my eyes to the importance of entomophagy (the practice of eating bugs). If you’re a Shark Tank fan (I mean, who’s not?), you may remember them landing a deal with Mark Cuban. (Laura appeared dressed up like a huge green cricket!) Laura and Rose are the co-founders of Chirps, a company that makes chips and other foods out of cricket powder. (Cricket powder is exactly what it sounds like, a protein powder made from roasted crickets.)

Laura and Rose met when they lived across the hall from each other freshman year of college, yet it took a while for them to become friends. While studying one summer in Tanzania, Laura (an off-and-on vegetarian) walked by a street vendor selling fried caterpillars. Wanting to do as the locals do, she tried one and thought it tasted like lobster. Meanwhile, half a world away in China, Rose was dared to eat a fried scorpion, and she thought it tasted like shrimp. When Laura and Rose got back to school, they started researching why over two billion people in other parts of the world eat bugs and we don’t in America. They decided to start a company that would spark a food revolution and began experimenting with insect-inspired foods. They tried everything from mealworm tacos to cricket sushi before landing on cricket flour (taking away the “ick factor”), which they used to make chips. As a way to raise money to fund their start-up, they entered pitch contests all over the country. And let me tell you, you haven’t seen anything until you’ve seen these two dynamic women pitch! Needless to say, they won most of them.

However, at first, few people believed in their insect-protein chips. Laura and Rose called 400 tortilla chip manufacturers before one was willing to make their chips. Today Chirps are sold on thousands of store shelves across the nation, and one of their company’s main missions is to educate people–especially kids–on how directly food impacts climate change. Here are some quick take-aways: Insects are one of the most sustainable protein sources on Earth. Pound for pound, crickets use 1000 times less water and 100 times less land than cows. Cows also create 100 times more greenhouse gas emissions than crickets. They’re also full of nutrients, with more B12 than salmon and more calcium than milk. With Earth’s population expected to grow from 7 to 10 billion by 2050, insects offer a protein alternative that’s easier to produce, requires much less open space, and can be raised even in cities.

After meeting Laura and Rose, I knew their journey was the perfect story for kids. It had everything: entrepreneurship, STEM, sustainability, pitch competitions, stage fright, pursuing dreams, and plenty of friendship drama. In EAT BUGS: PROJECT STARTUP, I re-imagined their story as if they’d met in a sixth-grade class and were paired together for a school pitch competition. They don’t get a long at first, and convincing people to eat bugs is an uphill battle. But like Laura and Rose, book alter-egos Hallie and Jaye are determined and resourceful. They manage to build a buzz-worthy business through humorous trial-and error (the crickets they’d assumed were dead come back to life while being baked into chocolate chip cookies!–true story!) while navigating middle school, turbulent family life, and forging a partnership that will eventually grow into genuine friendship. As I like to tell people, the book is The Babysitters Club meets Shark Tank meets How to Eat Fried Worms.

I hope you’ll take a read . . . and then take a taste of any one of the 1,900 nutritious, and delicious edible insects out there. I’d love for you to join us on Team Bug!

Like Loading...
← Cover Reveal for Ear Worm! by Jo Knowles It’s Okay to Just Be “Okay” by Jen Petro-Roy →