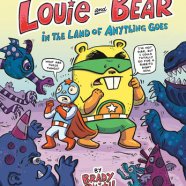 Living Off in LaLa Land by Brady Smith

As a kid (and I must confess as an adult too), I have never really been able to sit still. Focusing is, and has always, been hard. My imagination takes hold and my brain wanders. When it’s not wandering it jumps straight into light speed. There’s rarely a middle ground.

To quote an elementary school teacher, “Brady is always living off in LaLa land.” What today is referred to as ADHD, back in the seventies it was called, you guessed it, “Living in LaLa Land” or sometimes having “Ants in your Pants”. I got that one a lot too. My teachers might even go as far as to say I had an entire ant farm living in mine.

I remember my parents once telling me that in order to get my attention, they would have to randomly blurt out key words like “Shark!” or “Darth Vader!” or “Optimus Prime!” These words would be shouted out across our backyard while I was climbing a tree or playing with my action figures. Once I made eye contact, then they’d tell me what they needed to say. Most likely, “time for dinner” or “have you done your homework?”

When I was young, the only things I was interested in was drawing, Star Wars, sharks and climbing trees. That was pretty much it. Nothing else was in my bandwidth. And trying to focus on anything that didn’t hold my interest was a challenge to say the least.

So, here we are, decades later. I’m now a husband and a father. I make my living as an actor somedays and an artist on others. One night, while celebrating the recent release of a children’s book my wife and I wrote, our literary agent mentioned how popular young reader graphic novels were. She said, “Now that you have a children’s book under your belt, how about writing a graphic novel? Like a dog man or something silly like that.”

The next morning, in my studio, I decided to do just that. I’ll write Dog Man! It’ll be hilarious! It will be a story about a half dog, half man superhero and all his wacky adventures. I got started immediately and spent two weeks structuring a story, creating characters, and perfecting my synopsis before proudly sending it to my agent. And boy was she impressed! Mostly with the length I went to for a simple “joke”.

She truly thought I was hilarious. Then she asked what my real idea was.

“Huh?” I was confused to say the least. Thankfully my wife informed me that I had just spent the last two weeks of my life reinventing one of the bestselling graphic novels currently in every bookstore on the planet. I, of course, was completely unaware of this. Yep, living in Lala land. The story of my life.

One thing, I have yet to mention is that ADHD does comes with a perk or two. Yes, it’s hard for me to focus on stuff that I find uninteresting, but oh boy, when something does grab my attention? Watch out!

I’m like a horse with blinders on! It becomes all encompassing. That’s what the graphic novel turned into for me.

So, I buckled back in. I doodled. I stared at my wall. I went for long walks. I stared at my wall some more. The amount of crumpled paper with disregarded ideas piled higher and higher in my trash can. Then one day, out of nowhere, an idea surfaced. Characters and a new world formed in my mind. Most importantly, it was a world I knew I would love as a kid. Excited and reinvigorated, I dove deep. Weeks passed and when I came up again for air, I had something completely original. Completely mine.

“Louie and Bear in The Land of Anything Goes!” is hands down the longest I’ve ever worked on anything in my life. From the original idea to holding a copy of the book in my hands took close to three years.

It’s also the most focused I’ve ever been. I ate, slept, and breathed these characters and their world non-stop, to the point that sometimes my wife and kids would have to yell a key word or two to bring me back.

All that being said, I’m so incredibly proud of this book. It’s a testament to my younger self that living in LaLa land is ok. In fact, it can be a really fun, creative place to be. I’m hoping that this graphic novel will be the kind of book that helps kids, yes even the ones off in LaLa land, discover their love for reading and even use it as a tool to become readers for life. Most importantly, it’s a reminder, to my adult self, that if you stick with something, and don’t give up, you can do anything you set your mind to.

Now, if I can just do something about these darn ants.

Brady Smith grew up in Houston, Texas, and attended college at Stephen F. Austin State University, where he graduated with a Bachelor of Fine Arts degree. He has his own illustration and design company, Brady Smith Creative, and has worked as an actor on shows like Parks and Recreation and Alexa & Katie. Brady has also sold feature scripts, a television pilot, and a children’s book, which he has co-authored with his wife, actress Tiffani Thiessen. He currently resides in Los Angeles, with his wife, their two children, three pooches, eight chickens, and one fish.

Like Loading...
← Reflections in a Mirror: Writing Identity in YA by Kelly McWilliams Cover Reveal: Nothing Is Little by Carmela Van Vleet →