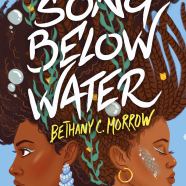 A Song Below Water by Bethany C. Morrow – Review by Kacy Smith Paterson

Posted by CBethM on February 16, 2022 in New Book Reviews | Leave a comment

A Song Below Water by Bethany C. Morrow

Bethany C. Morrow writes in multiple genres for both adult and young adult audiences She weaves speculative fiction, magical realism, and social justice into her 2020 release, A Song Below Water, a story of black magical teenagers in current day Portland, Oregon. (A companion novel, A Chorus Rises, was published in 2021.)

Tavia and Effie are sisters by choice, and they alternate as narrators of the story. Tavia is a siren, a part of the magical community in Portland- but unlike other magical creatures, like elokos or sprites, sirens are not celebrated or even tolerated by the magical and non-magical communities.  Once sirens are identified, they often have to wear silencing chokers. Tavia doesn’t openly identify as a siren, even going as far as sometimes using ASL to communicate. Effie is unsure of exactly what part of the magical community she is, but she knows she is becoming…something. Her transformation is scary to her. This is coupled with being the sole survivor of a traumatic childhood incident where many children  were turned to stone while in a local park. As Tavia hides her sirenhood, Effie hides from her past and from people who are curious about her past.

Still, Tavia and Effie are fiercely devoted to each other- and their friendship is such a beautiful part of this story. They also have family members who support them, and, in keeping it magical, a gargoyle guardian.  Gargy, as he comes to be called, adds a layer of humor at times to this work, as do Tavia and Effie’s conversations and observations.

Effie also plays a mermaid in the local Renaissance Faire, a role her deceased mother also had. The Renaissance Faire also serves as a place of welcome and happiness, which does at times contrast with Portland. Portland has been called “The Whitest City in America,” and while having a reputation of a haven for flannel and coffee, Portland has not been a welcoming place for her Black residents . The nexus of being Black, a persecuted magical creature, and female play out in the story, in particular when Tavia is pulled over by the police, and when a siren is murdered. The murder, which takes place in Oregon but is a national story,  is deemed  justified because the victim was a siren. This last event causes Tavia and Effie to attend a protest, organized by one of Tavia’s internet idols. At this protest, Tavia and Effie both witness the allyship of their friends become performative, and the brutal retaliation against a siren who dares to use her voice.

Contrasting with all the magical creatures and mystery, Effie and Tavia are also fairly typical teenagers. They have high school classes  and homework, friend circles, and social drama. They argue with family and ponder family secrets. They have crushes; Tavia is trying to get past a failed relationship with a boy named Priam, who has started up a new relationship with the immensely popular Naema. Naema is an elokos, a beloved member of the magical community. (Elokos can be any color or gender, but sirens are always Black females). This tension of relationships, identity, popularity, and acceptable magic build into an explosive ending. Effie’s acceptance of her true identity and powers also factor into the ending.

Ultimately, Tavia finds and uses her voice for healing and to claim her power. I don’t want to spoil what happens to Effie- read the book! It’s so worth it.

This is an alluring book. The storytelling, dual narration, and the contrast between magical realism and daily teen life, and the bond between Tavia and Effie create a memorable story.  A Song Below Water is suitable for many levels of young adult readers- I wouldn’t classify it as a middle grade book. Eighth grade and high school readers will find places of identity in this work. This is a perfect read to put in the hands of your readers who love fantasy, magic, and/or social justice.

Kacy Smith Paterson lives and works in Portland, Oregon. Portland sits on the traditional and unceded land of the Multnomah, Wasco, Cowlitz, Kathlamet, Clackamas, Bands of Chinook, Tualatin, Kalapuya, Molalla, and many other tribes who made their homes along the Columbia River. Kacy reviews books (and posts frequent plant, bee, and bulldog posts) @pdxkacyreads on Instagram.

Like Loading...
← We’re All Nellie Bly and Elizabeth Bisland at This Point by Kate Hannigan Time-Traveling with Clara Barton and Illustrator Christopher Cyr  →