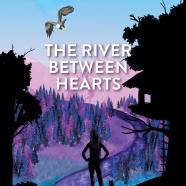 America is wading through a divisive era. Theories abound as to why, and social media—the great forum of false fronts, of defacing the individual, of stripping away our shared humanity—stands as culprit in many of them. Social media’s great irony is that many of us wander there seeking connection. The work of middle-grade readers is to define their worlds, and, though they may not be fully engaged in it yet, they’re growing up amid this paradoxical cauldron, thus kids need antidotes to its toxicity.

There’s scientific proof of late that reading narratives generates empathy, and the more literary and realistic the narrative, the more empathy it generates. Empathy leads to understanding, compassion, even kindness. As an author, my instinct (and hope) is that reading stories nurtures a blend of these traits, so I craft my writing toward this end. In fact, with my latest MG novel, The River Between Hearts, I wrote straight toward it.

It’s useful to first clarify the difference between sympathy and empathy. Inherent in sympathy is feeling pity for the other person. And inherent in pity is viewing them as “other,” as looking down on them. To experience empathy we must first experience the other person as like us, as same, as an equal. Only then can we truly imagine what the other person is experiencing as if it were happening to us. This is a nuanced yet crucial boundary to cross. It can also feel scary because in doing so, one must open the heart. Books, because they are imagined, are tremendous sources for practicing this opening.

Crucial to writing The River Between Hearts was deeply establishing its almost-eleven-year-old protagonist and narrator Rill, and her friend Perla. So I hung out with live kids their age, listening, observing, and noticing, especially what I didn’t hear or see. I worked with former immigrant students to get Perla’s details just right. Frequently in MG books, the protagonist has special powers or is highly intelligent, a genius even, and quite mature, and the story revolves around these special attributes solving the riddles of the world. I adore books like this, yet because my book would explore difficult topics occurring in our world today and because I hoped to generate the most empathy, I wanted its characters to seem utterly real and relatable.

For example, kids, a lot of teens and, yes, many adults, don’t acknowledge or discuss their emotions. If they do encounter them, it’s through physical sensations or actions. This lack of self-awareness became the major conflict for Rill as she dealt with a tremendous loss. Once I realized this, I knew she’d be an unreliable narrator. Not purposefully, but by unconscious denial.

Rill being in denial allowed me to write about grief in a nuanced way, providing clues for the reader that are revealed via her often humorous naïve actions and revelations. Mistakes were imperative, they’re how we learn. I strove to craft her as so unintimidating yet likeable that readers feel they comprehend her predicaments better than she does and want to protect her. When she barrels toward a mistake, my hope is readers are fully invested, creating suspense. This also prompts them to consider their own mistakes, setting the stage for their own revelations.

For five years I honed Rill’s characterization and narration. I consulted a lower school director to clarify that fourth-graders would use the word “lady” not “women.” I caught and caught again the moments when my adult perspective or flowery language had crept in. I tweaked and tweaked Rill’s voice. By keeping her vocabulary and intellect genuine and by having her discover things through action rather than a special gift, I could draw upon her senses, inviting readers in physically, and this set the stage for further connection. Once readers were onboard with empathy for Rill, they were ready to navigate her transition from sympathy to empathy for Perla (someone “other”). It’s a two-way street, though, and Perla is simultaneously experiencing the same shift as their friendship develops. Ironically, YA and adult readers have told me that they too connect deeply with Rill, often with nostalgia.

My hope is that via unintimidating, relatable Rill, readers can then explore immigration and grief and their consequences for kids as kids would view and experience them. Above all I hope the novel serves as a safe-feeling learning space, thus a guide for readers of all ages toward empathy.

Heather Mateus Sappenfield has written two YA novels and a literary short story collection. Her books have earned many accolades, among them a MPIBA Reading the West Award nomination, a Ben Franklin Awards Silver Medal, an Earphones Award, a SOVAS Award, and finalist for the Audie Awards and the Colorado Book Awards. The River Between Hearts has been a School Library Journal “Titles to Watch for in 2022” and a CBC “Hot Off the Press” selection.

Like Loading...
← Cover Reveal: The Edge of In Between by Lorelei Savaryn Not Necessarily Keats by Linda Williams Jackson  →