Home » Author Posts » In The End, It’s The Story That Matters by Debbie Ridpath Ohi

In The End, It’s The Story That Matters by Debbie Ridpath Ohi

Before reading further, I should tell you upfront that I illustrated a so-called “celebrity book.” The book is a new picture book from Simon & Schuster Books For Young Readers called I’M BORED, written by comedian, actor and author Michael Ian Black.
I put the term “celebrity book” in quotes because the pairing strikes me as odd. If a school librarian wrote a  novel or memoir or picture book, would we be referring to it as a “school librarian book?” But to avoid quotation mark abuse, I’m going to drop the extra punctuation and move on.
Celebrity books get attention in the press. Not surprising, considering the authors are…well…celebrities. Some of the attention is good, some not so great.
Like other published books out there, the quality of celebrity books varies. I’ve heard some authors rail bitterly against celebrity books, complaining about the injustice of famous people getting the book contracts with mediocre manuscripts while higher quality content written by lower profile authors gets rejected.
While I lack the experience and knowledge to defend the publishers who do publish weak stories, I can speak from my experience that was not the case with I’M BORED.
I saw the unedited version of I’M BORED, sent to me by Justin Chanda (S&S publisher and editor of the book), who asked if I’d be interested in illustrating the story. Some of you may be rolling your eyes at this point, thinking, “Yeah, like you’d say no to S&S for your first book.”
I am being completely honest when I say that I LOVED Michael’s story, even in its unedited form. The ending made me laugh out loud, and I adored the unabashed sincerity and heart at the core of I’M BORED. Michael can write, and after reading his YOU’RE NOT DOING IT RIGHT book, I’m hoping he someday decides to tackle YA – he has such a wonderful writing voice.
As for celebrity books taking away opportunities from the aspiring masses, I want to say that it was the opposite in my case. There is no way that Simon & Schuster Books For Young Readers would have taken a chance on a totally inexperienced illustrator like me if they didn’t have a well-known author who would bring in guaranteed sales.
I’m grateful to not only S&S but also Michael, who could have given me a pass and opted for a better-known illustrator instead. An aside: Michael may have a cynical and non-PG-rated public persona, but he has always been consistently professional, supportive and enthusiastic in private e-mail.
Young reviewers have given I’M BORED a thumbs up so far, and I’m delighted. In the end, after all, it doesn’t matter how famous the author of a book might be. The most important thing is the story and its ability to connect with young readers. 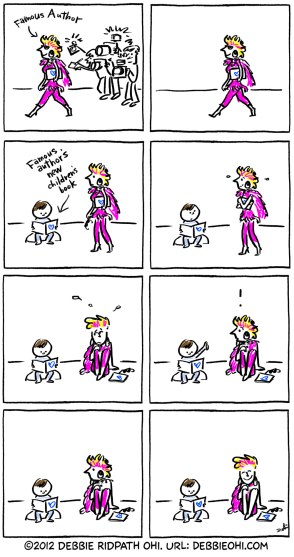 Like Loading...
← The Late Bloomer’s Path to Becoming a Reader by Gigi McAllister Small Damages by Beth Kephart – Reviewed by Lauren Strohecker →