“Remember that writing is to put love in the world, not to use against your friends.”  – Ole Golly Waldenstein

I am not exactly sure how old I was when I first read Harriet the Spy by Louise Fitzhugh, but I am sure it was between the age of 10-12.  My best friend and I would ride our bicycles to the public library each week and check out bags full of books.  I am sure Harriet was in there with the Boxcar Children and Little House on the Prairie.

Just recently I found out that Harriet the Spy and I have something in common.  No, it is not that Harriet M. Welsch and I both have notebooks to contain our deepest thoughts.  Or that we both love to stay up late and read in bed with a flashlight until someone comes and tells us it is time to go to bed.  (Ok, it is no longer a flashlight, and it is now my husband, not my parents, who reminds how late it is!)

Harriet the Spy and I share something special.  We both turn 50 this year.  It is hard to believe that the girl who was dressed in jeans, a blue sweatshirt and black glasses with no lenses, who walked around spying on people and who carried a black and white composition notebook to record her observations of people is turning 50. 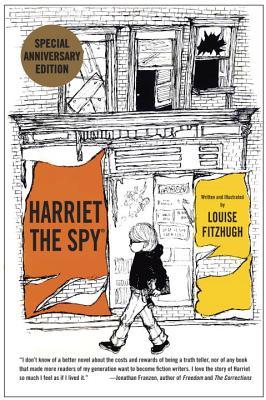 When the book was first published in 1964 it was not without controversy.  Many people, namely parents, wanted it banned because they felt Harriet set a bad example for children.  She encouraged children to lie, defied authority, and talked backed to adults.  Harriet was not a typical female character back in 1964.  Harriet believes in who she is and refuses to give in to conformity in order to fit in and be socially accepted.  She is mean and revengeful, which makes her unlikeable to some readers.  Because of this, Harriet did not fit the mold of the stereotypical female characters who were portrayed in much of children’s literature of that time.  Other readers identified with Harriet’s strength and the way she dealt with life’s problems as a child.  In a recent video, Kate DiCamillo mentioned Harriet the Spy as a children’s book that influenced her childhood.

Harriet M. Welsch is an eleven year old who wants to be a writer and has her own spy business.  Every day she dons her spy attire and follows a regular route through her neighborhood.  Along the way she hangs out in the alley behind the grocery store owned by the Dei Santi family and listens to their family problems.  She watches Mr. Withers and his 25 cats through a skylight on the roof of his house, and she hides in a dumbwaiter in the private home of Mrs. Agatha K. Plumber, who lies in bed talking on the phone all day.

As a spy, Harriet records everything she knows about everyone she sees, including her neighbors, friends and classmates.  She holds back nothing and writes the “truth,” which is often cruel and horrible things about her friends and classmates.  She writes things she would never say out loud.  One day Harriet loses her notebook at school and it falls into the wrong hands.  She assumed just because she had scrawled “private” all over the notebook, no one would read it.  She finds that her notebook isn’t the only thing she loses.

Although Harriet has friends, she is a very lonely person.  Her parents care more about their social life than raising their child, which is left up to Harriet’s nurse, Ole Golly.  The two have a very special relationship, but Golly goes away and leaves Harriet grieving for their relationship. Harriet receives a timely letter with advice from Ole Golly in the midst of her turmoil.

I have been thinking about you…Naturally, you put down the truth in your notebooks.  What would be the point if you didn’t?  And naturally, those notebooks should not be read by anyone else, but if they are, then, Harriet, you are going to have to do two things, and you don’t like either one of them:

Otherwise you are going to lose a friend.  Little lies that make people feel better are not bad, like thanking someone for a meal they made even if you hated it…But to yourself you must always tell the truth…You don’t need me now.  You’re eleven years old which is old enough to get busy at growing up to be the person you want to be.

If Harriet were alive in 2014, I imagine her as being a writer who learned how powerful words could be when used in a positive way.  She continues to read children’s literature, opposes censorship of any kind, and would certainly be a member of The Nerdy Book Club.

A special anniversary edition of Harriet the Spy will be available February 25th.

Leigh Anne Eck is a 4th grade teacher in southern Indiana and this is her seventh year of teaching.  She can be found on Twitter @Teachr4 or on her blog:   A Day in the Life.