A Thief and a Liar: Ten Short Stories for Young Male Wanna-Be Readers by Mike Hays

Back in 1980, in a public high school in Kansas City, Kansas, a young football lineman, a junior at the school, took a semester course called Short Story.  The young man took this course either because he was incredibly interested in literature, OR, it sounded like an easy class to take (You know, a SHORT story vs. a LONG story).

The Short Story course had a textbook and on the first day of class, the young man walked into the classroom storage closet to get one of the ancient copies stacked on the shelf. He picked up a particularly ratty and torn copy; one of those special kinds of extraordinary books with a long history. He opened it and something magical happened.

To make a long story short, over the course of the semester, driven by this book and mimeographed sheets of “modern” short story handouts, the young man was transformed from a “You’re gonna make me read that?” digester of words into a reader.

At the end of the semester, the young man thought he surely checked the book in, but maybe he didn’t. Perhaps this book knew the young man needed it and stuck with him for the rest of his life, keeping him an honest reader and reminding him of the beauty of the written word.

The book is called MAJOR WRITERS OF AMERICA, copyright 1966, Under the General Editorship of Perry Miller, late of the Harvard University. 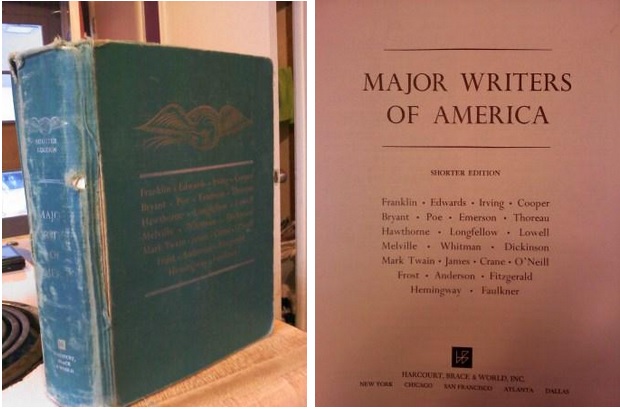 It is like a Hall of Fame of American Literature.  Many of the stories contained within the book are absolute classics.

Some of the stories, like Hemingway’s “Big Two-Hearted River,” I have probably read 50 times.  Others, like, “A Witch Trial at Mount-Holly” from Benjamin Franklin, I have yet to read.

Besides the Bible, this book has had a bigger influence on me than any other text on the planet.  It helped mold a big, dumb lineman into a man with a love of story and a love of words.  I apologize to Washington High School and sincerely hope that the statute of limitations on my crime has expired.  Please forgive me. Rather than pinching a book from a public school, I prefer to think of it as a “book rescue.”

This brings me to the issue of the boy reader. Why do we worry so much about developing boy readers?

Because reading is important, that’s why.

I’ve witnessed and experienced how important reading is for young middle school to high school males. Reading triggers transformation. Reading opens the vault of learning possibility. Reading gives us the power and the tools necessary to teach ourselves new skills. Reading is an acquired superpower.

I am a scientist by trade, a sports coach, and I write books. I write from a boy perspective because that is how I see the world of the stories in my head. I write books for the type of kid I was, one who sits in the shadows at the edge of reader-hood looking curiously in and quietly wishing for an invitation to enter.

As a Rule 10 (non-teacher certified coach) coach of high school football and baseball for over ten years, I observed a difference between those boys who read and those who felt reading akin to dying one’s hair a pretty coral color.

You could see it in the shine of the reader’s eyes, the mental capacity and “on-the-fly” logic that allowed them to calculate the vector angle while ripping through a 250-pound offensive tackle to make a tackle or turning a 3-2-4 double play with bases loaded and one out in the last inning to preserve a one run victory.

With the story logic of beginning, middle, and end ingrained in their minds from reading, these young male readers were able to analyze and function better in their sport by simply having recognition of, and a plan for, the beginning, middle, and end of a sports play. I believe reading made these athletes better performers on the field (and led to better off-the-field discussions with their coach on such subjects such as Frankenstein).

How do we build the boy reader? In a word: Patience.

Developing boy readers requires a wee bit more patience. My suggestion is to rent one of those gargantuan dump trucks, fill it to the brim with patience, and take a bath in it three times or more a day. Patience is the key. Patiently use small motivations to lure them into reading or back to reading. Dangle the baited hook in front of their faces until they cannot stay hidden in the waters of “too cool to read”-ness one, single iota of a second longer and snap up the bait.

We want to be readers; we just need a little shove.

Looking for bait to hook your young reader? How about short stories? Here is my list of stories to bait the hook for your young male readers.

As you can see, not only am I a thief of books, but I am a liar. I lied about the ten stories bit in the title; it’s actually a list of 20 stories. I apologize, but how could I whittle this list down to ten when it could be easily be 100?

Toss them the bait and see if they take it. Most of these stories can be found floating around the inter-webs.

Switch baits if you have to. Short stories, novels, novellas, comic books, graphic novels, magazines, newspapers, manuals, and/or backs of cereal boxes…whatever it takes for a kid to find his very own version of MAJOR WRITERS OF AMERICA.

Once the hook is set, reel them in.

Mike Hays is from Kansas, a tried and true flat-lander by birth. He writes from a boy point of view and hopes to spread his particular style of stupid-funny inspiration through his books, blogs and social media. His upper middle grade historical fiction novel, THE YOUNGER DAYS, is about a family’s survival in the fallout from the violent Border War over “Bloody” Kansas. He is part of the #MGLitChat host team for the Thursday evening weekly Twitter chat dedicated to the lively discussion of all things middle grade bookish. Connect with him on Twitter: @coachhays64.

Like Loading...
← “That was intense!”: Getting Boys Excited About Books by Ernie Cox and Marcus Hora GROWING A READER by Janet Gurtler →