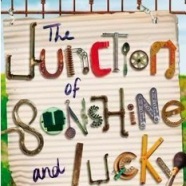 Because I am a fourth grade teacher, I try to make conscious decisions about the middle grade books I recommend to my students.  Fourth grade falls on the low end of the middle grade spectrum.  Sometimes these novels teeter on the borderline of appropriateness for this grade level, due to their language or mature content.

Earlier this year I came across The Junction of Sunshine and Lucky by Holly Schindler.  I knew this was a perfect novel for middle grade readers. 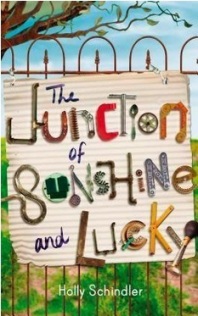 August “Auggie” Jones lives with her Grandpa Gus, a trash hauler, in a poor part of town. So when her wealthy classmate’s father starts the House Beautification Committee, it’s homes like Auggie’s that are deemed “in violation.” Auggie is determined to prove that she is not as run-down as the outside of her house might suggest. Using the kind of items Gus usually hauls to the scrap heap, a broken toaster becomes a flower; church windows turn into a rainbow walkway; and an old car gets new life as spinning whirligigs. What starts out as a home renovation project becomes much more as Auggie and her grandpa discover a talent they never knew they had—and redefine a whole town’s perception of beauty, one recycled sculpture at a time. Auggie’s talent for creating found art will remind readers that one girl’s trash really is another girl’s treasure.

The Junction of Sunshine and Lucky is a debut middle-grade novel written by Holly Schindler.  It is a book that needs to be read, discussed and shared.

I made several personal connections with this book.  I don’t know if it is because I live in a small midwestern town where I could easily see a neighborhood like Auggie’s.  Or because I have gone to auctions and collected many antiques, or what some would call “junk.”  It might even be that I favor straight-to-the-heart books like this one. Whatever the connection, I felt at home in the town of Serendipity Place.
From the beginning of the story, Auggie wandered into my heart, plunked herself down, and simply stayed there.  I am encouraged when I read books with strong female characters and Auggie didn’t let me down. She is feisty, spunky, full of determination, and backs down to nobody. When she goes up against the Beautification Committee, a new rich girl in town, and her best friend, I was cheering her on saying, “You go girl!”

Many messages can be taken from this book: life lessons about love, hope, family, friendship, beauty, and abandonment.  But the message that resonated with me, was sticking up for what you believe in.  Auggie learns that she is poor, but she still has pride in herself, her family, her neighborhood, and everything that belongs to her.  When the community mocks that pride, she proudly stands up to all of them.  She makes her voice heard, and in the end, finds what she had been looking for all along – her shine.

“The way I figure it, there are two kinds of people in this world—people who shine like the chrome on Old Glory, and people who are more like the rusted metal in McGunn’s.  My entire life, I’ve been surrounded by people who shine, who have a special-something.  And starting tomorrow, I’m going to find mine.” – Auggie Jones

I contacted Holly to see if she would answer some questions for this review.  She graciously accepted, and I am grateful for her generosity in sharing her thoughts.

This is your debut middle grade novel.  What made you decide to write a book for this age group?

When I took the full-time writing plunge, I was working on adult material only.  In order to pay my bills, I started teaching music lessons out of the house each afternoon.  Somehow, I’d expected our tech revolution to have changed kids, made them savvier.  But they weren’t.  I was absolutely shocked at how familiar my students were to the kids I’d known in school.  I understood my students in a way I hadn’t expected; they inspired me to try my hand at juvenile work.

The first books I published were YAs, but I was drafting MG work at the same time I was writing my YAs.  I just happened to sell my YAs first.

I believe this is a perfect book for younger students in the middle grade range.  It doesn’t cross the line of being too mature or having language that I would consider questionable.  Did you think about this while writing the story?

I was really just thinking about staying true to my main character, Auggie.  She has a pretty strong voice, a poetic voice.  Staying true to her voice was actually what led me through the revision process.

That’s not to say I don’t tackle mature themes in the book.  Auggie and the rest of the cast of characters face issues of eminent domain and poverty and are asked to define for themselves what they think “art” is.  But it’s all handled through Auggie’s eyes and described using her poetic, positive view of the world.

Auggie is a character of color.  This could have easily been a “race issue,” a dividing line between the races of the community, but it wasn’t.  It was about deeper things than color.  Was this intentional or did it just turn out that way?

Most of my books start with issues, a “what-if.”  But this one began when I saw Gus.  I saw him as clearly as I’ve seen any person in my life.  It was as though I were looking through Auggie’s eyes straight at her grandfather.  When I saw Gus, he was African American.  As I explored the issue of folk art, I loved the idea of a multi-racial neighborhood—loved the idea of Auggie’s neighbors looking every bit as different from one another as the sculptures in her yard.  (I thought it also showed where some of Auggie’s inspiration came from…)

Where did you get your idea for this story?

I’ve been going to auctions for years—first with my folks when I was a little girl, and these days with my brother, a full-time antiques dealer.  You can always find repurposed items at a farm auction (a stool made from a Coke crate, needlework on old feedsack material).  I knew I wanted my artists to make their sculptures from discarded material.  The more I looked into folk art, though, the more intrigued I became with folk art environments—the Watts Towers in California, for example, or the Orange Show in Texas.  I loved the idea of a work of art the artist could live in!

Do you have plans for another MG novel?

I have more ideas than I know what to do with.  I’m always working.  My next YA, FERAL, will release on August 26 with HarperCollins.  Right now, I am working on my next MG (and if you liked Auggie, you’re going to LOVE this new main character)!  Really, though, I never know where my next book will lead—what subject, what genre.  That’s part of what makes writing the most exciting thing in the world.

You can reach Holly through the following links:

Leigh Anne Eck is a 4th grade teacher in southern Indiana and this is her seventh year of teaching.  She can be found on Twitter @Teachr4 or on her blog:   A Day in the Life.

Like Loading...
← Lately, Man, It’s All About the Weed by James Klise Butter by Erin Jade Lange – Review by Kevin English →