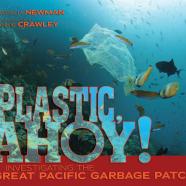 WHEN A BOOK BECOMES A CALL TO ACTION by Patricia Newman

I didn’t plan to write a call to action. I planned to write a science book for kids about plastic accumulating in the North Pacific. But the project surprised me partway through, and took me in a new direction.

The idea for Plastic, Ahoy! Investigating the Great Pacific Garbage Patch began with an article in my local newspaper about graduate students who organized a research trip called the Scripps Environmental Accumulation of Plastics Expedition (SEAPLEX). They wanted to study the growing plastic problem in the North Pacific Central Gyre—a massive area of open ocean surrounded by circling currents. SEAPLEX was one of the first expeditions to gather data from the gyre, and its story showed how science could be fun and relevant. The nonfiction author in me wanted to know more.

I found a raft of information. Mystery. Adventure. Tragedy. All the makings of a great read. But during the research and writing process a new idea took hold:  What if Plastic, Ahoy! helped readers change their habits? And what if my readers helped change their parents’ and classmates’ habits?

Such ideas seem obvious now, but at the beginning of a new book nothing is obvious. The beginning is fraught with analyzing a glut of research, developing a theme, and figuring out how the structure of the narrative serves the theme. My goal to affect change became the point of view from which I crafted the narrative. (Discerning an author’s point of view is an advanced critical reading skill; see below for possible questions to use in a classroom).

For instance, I discovered that the gyre—nicknamed the Great Pacific Garbage Patch by the media—is not a floating island of trash at all but millions of plastic pieces, most of which are no larger than your pinky fingernail. SEAPLEX trash detectives measured over one hundred times more plastic in the North Pacific during their expedition than scientists had counted in 1970. The trash detectives sailed more than 1,700 miles and found plastic in 98.5% of their net tows. They found plastic in the stomachs of one in ten fish and extrapolated that fish inhabiting the middle depths of the North Pacific eat a whopping 12,000-24,000 tons of plastic annually. 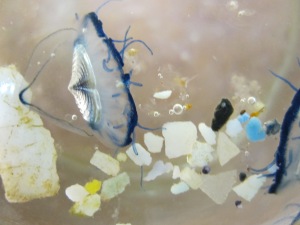 I also used quotes to allow readers to see the ocean through the scientists’ eyes. For instance, although SEAPLEX scientist Chelsea Rochman expected to find plastic in the gyre, the emotional impact of her findings surprised her:  “To see plastic debris in the middle of this large stretch of ocean, far from land, offers a wakeup call for the way we leave our footprint even on remote places of the Earth.”

Reviewers and readers have characterized Plastic, Ahoy! as “sobering” and said that it made them “sad” or “angry,” and I cheer these expressions of emotion. Readers have reported surprisingly simple and effortless behavior changes. Students with whom I’ve talked participate in school recycling clubs. They make commercials urging their classmates to recycle. One Alabama school eliminated Styrofoam lunch trays from their cafeterias in favor of reusable trays.

Our society will probably never be plastic-free, and I’m not saying it should. Plastic can be a useful tool. But we use a tremendous amount of single-use plastic: 400,000 plastic bottles and nearly 1.5 million plastic bags every minute. And less than 10% of it is reclaimed by recycling.

Writing Plastic, Ahoy! made me reconsider my habits. Although I’ve carried reusable grocery bags to the store for years, I switched to net or canvas bags for produce (where plastic is still the norm). I carry reusable bags to the mall, and I stopped using liquid body wash from a plastic bottle in favor of bar soap packaged in cardboard boxes. When I travel, I drink water from a stainless steel water bottle instead of a plastic one. If restaurants hand me a Styrofoam “to go” container, I ask for aluminum foil and say I’m cutting down on my single-use plastic. I recycle the plastic that I do use (see below for list), and I will vote in favor of the plastic bag ban in California.

Perhaps as you read this, you might consider asking the barista to pour your latte in a reusable mug instead of a paper cup with a plastic lid, or refusing plastic straws (sometimes wrapped in a plastic sleeve) when your waiter drops them on your table. Maybe the next time you fly you will keep your plastic cup for a refill instead of requesting a new cup. The airline industry uses nine billion plastic cups annually, and rarely recycles.

In keeping with my goal to affect change, I hope my readers will continue to find out more about ocean plastic once they close Plastic, Ahoy! I’ve included print and online resources at the back of the book to make it easy for them. Additionally, my blog provides an ongoing summary of ocean plastic science.

Our oceans produce the oxygen for two of every three breaths we take. Our health depends on the health of the oceans. Please heed Plastic, Ahoy!’s call to become a dedicated steward of the largest ecosystem on our planet.

Are you recycling all of the plastic you can? Recyclable plastics in Sacramento County, CA

Use Plastic, Ahoy! to discuss point of view with children:

Patricia Newman is the author of fiction and nonfiction trade books, school and library titles, and magazine articles for children, including Plastic, Ahoy! Investigating the Great Pacific Garbage Patch, a Junior Library Guild Selection, a finalist for the AAAS/Subaru Science Books and Films prize, and a Nerdy Book Award winner; Jingle the Brass, a Junior Library Guild Selection and a Smithsonian-recommended book; and Nugget on the Flight Deck, a California Reading Association Eureka! Silver Honor Book for Nonfiction. She is a frequent speaker at schools, libraries, and conferences. Visit her at www.patriciamnewman.com.

Like Loading...
← “I See Me” by Michele and Keegan Knott An English Teacher’s Dirty Secret that Could Unlock the Door to Voracious High School Readers by Amanda Palmer →