Home » Author Posts » Who is Travis Nickerson from Fish in a Tree? by Lynda Mullaly Hunt 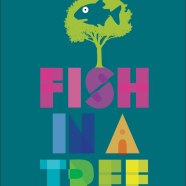 Who is Travis Nickerson from Fish in a Tree? by Lynda Mullaly Hunt

Fish in a Tree is about a sixth grader named Ally Nickerson who thinks she’s dumb. She isn’t dumb, but she does have undiagnosed dyslexia until she meets Mr. Daniels, her new teacher. Ally learns that, although dyslexia poses some challenges, it also has some special gifts wrapped up inside of it as well. She learns to own and respect who she is. Really is. 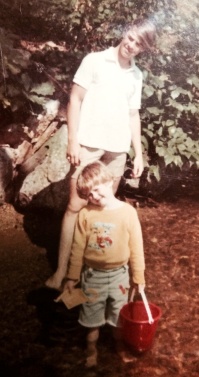 He didn’t look like he’d play the part of someone else’s savior.

His own mother called him a hood. He had long hair, a history of fighting, some brushes with the law, and a school-wide reputation among the teachers. There were some that said he’d end up in jail one day.

And yet, every day when I came out of school, there he was. Leaning against the wall, hands stuffed into the pockets of his black pea coat. He’d smile in that lopsided way—only on the right. Flipping his head to the side to toss the sweep of hair from his eyes. “Hey, Lulu,” he’d say. His nickname for me since I’ve had a memory. As a toddler, I called him “Keke” because I couldn’t say my big brother’s name. “Ricky.”

I learned—as Ally does—that there is a difference between an “older brother” and a “big brother” and Ricky has always been the latter. The big things he did mattered, but it was also in the millions of little things over thousands of days. Frying me an egg when I was hungry. Spending his own money to be sure I’d have Christmas presents under the tree. Taking me to the Children’s Museum and out to lunch. I remember him holding a handful of change at McDonald’s and, while he counted it, asking me if I’d wanted something else. I’d said no, but his face was earnest. “I can get you another burger if you’re hungry. Are you sure?” he’d asked.

Not to say Ricky and I didn’t disagree, as all people who love each other do. One day, when a caller asked for my mother on the phone, I replied, “She can’t talk right now. She’s busy building a pedestal for Ricky.” And then I hung up.

But, I always knew he was my flesh-and-blood guardian angel.

I often got sick with asthma when I was young. On one of many visits to the hospital when I was little, Ricky carried me in his arms. I was limp and only semi-conscious. The nurse pointed her chin toward the room full of orange chairs and told him that there would be a wait. Glancing over at the crowded waiting room, looking down at my chapped lips and pale face, feeling my labored breathing, he told her that I was sick. That I could. Not. Wait.

She snapped at him, saying that we’d wait our turn like everyone else. Still holding me in his arms, the memory of our brother, Michael Eric, coming to the hospital a few years earlier must have rung in his head. How Michael Eric had had asthma and pneumonia. How he had gone into respiratory failure. And how he never came home again.

His grip on me tightened. At first, he shifted his weight but then stood firm under the fluorescent lights and yelled, “No…This is my little sister. We are not going to wait.” He was loud and he swore and as security approached, he pleaded, “My little sister…can’t breathe.”

A doctor came over, touched my face, and waved to another staff member to get me a bed. After speaking with security, Ricky was ultimately brought in to sit with me.

Ricky did eventually go into the system as some had predicted and has stood before several judges. As an attorney. Which makes perfect sense. At the heart of him, Ricky is a defender. Just like Travis is.

Factually, Ricky and Travis don’t have too much in common.  But, as a writer, the facts matter little. It’s the relationship—the sturdiness of it drove the writing. As Ally struggled and could have very well lost all hope, I could feel the solidness of both Rick and Travis buoying her as I told their story.

There is a scene in FISH where Ally receives an honor at school. In the first draft, Ally’s response to the award was, “My brother, Travis, will never believe this!”

In that first draft this chapter was a mess; I just couldn’t get it to work. It wasn’t until I realized that Ally would never assume he’d react that way—and he never would—that I got an authentic scene out of it. It’s funny how the things that drive a book’s authenticity are so deeply entrenched; some of the most important parts of a story are not on the page.
Watching Ricky as I grew up taught me things about life. And you know what? All of those things pertain to both writing and teaching as well: 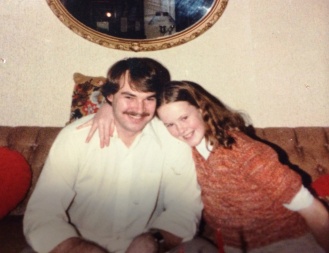 You show you care about things by working hard at it.

Know the kinds of chances to take.

Don’t just look –see the world and people around you.

But remember to see inward, too; don’t be easily led by others.

Do the right thing even when it’s hard.

Keep your eye on what really matters.

Lynda Mullaly Hunt is the author of middle-grade novel, ONE FOR THE MURPHYS (Nancy Paulsen Books/Penguin), winner of The Tassy Walden Award: New Voices in Children’s Literature, an ABA New Voices Pick, A Nerdy Book Award Winner, and an Editor’s Choice Book with Scholastic Book Clubs. It also appears on 22 state lists. Lynda has directed the SCBWI-NE Whispering Pines Retreat for eight years and is a former teacher and Scenario Writing coach. Her second novel, FISH IN A TREE, will be released in February 5, 2015. Lynda lives with her husband, two kids, impetuous beagle and beagle-loathing cat.

Like Loading...
← Books That Make Us Cry (Part Two) Collected by Donalyn Miller Taking Ownership of His Reading Life by Jaymie Dieterle →