Raising the Stakes on Young Writers by Brian Kelley

Towards the end of last school year, I revisited an idea for a collaborative student novel when I received a serendipitous email from Opera Philadelphia. They offered schools free tickets for the 2015 season. All we needed was transportation and some context.

I wondered if this year’s students could reimagine an opera as a middle grade novel.

After exploring the costs of paying for professional editing services, I chose CreateSpace because of the menu of options regarding editing and design services. Additionally, by going through CreateSpace I knew we could publish our classroom novel on Amazon.

In August I had an even one-hundred students in my class. I calculated out the cost of editing and designing a 25,000 word novel–just over $2,100. I sought funding from our student council.

In my formal proposal, I established that each student in my class would write a 250-word section of the novel as well as experience the world of professional editing and publication. Also, all royalties for book sales would go back into our student council fund.

Our classroom novel, Qwerty, was an engaging project in its own right, but my rational was built on my professional growth plan for this year: talking about writing. When I polled my students at the start of the year, I asked which of the Six Traits of Writing do you feel most comfortable speaking about: Ideas, Organization, Voice, Word Choice, Sentence Fluency, or Conventions? Over two-thirds selected Conventions. Most of the remaining one-third chose Word Choice. Very few selected Ideas or Sentence Fluency. None picked Organization or Voice.

By tackling the classroom novel I taught my students to talk about writing beyond conventions and vocabulary development. By hiring professional editing services, I thrust them into a comprehensive world of revision which I can’t possibly replicate alone. Suddenly, I was no longer a judge of what is deemed correct, clear, or compelling. I was a mentor alongside of my students in a situation where the stakes of writing were raised.

Upon hearing my introduction of the project, one student said he was a little uneasy about it. He didn’t want to be the one who screwed it up for everyone else.

Another framed it as a first, real opportunity to use writing in the real word. He added, “Think about it. In math, how often do we get to go out into the real world and measure for a cylinder for a piece of farm equipment?”

After outlining the basic plot of the opera, Don Carlo by Verdi, into one-hundred scenes–one scene per student–early lessons focused on character and conflict. Once students had a grasp of the characters and the obstacles, we discussed, “How could we translate this into something an adolescent would do?”

Students selected their scenes on a first-come, first-serve basic. I set up a Google Doc which made the scenes disappear as each selection was made.

We wrote each scene six times–once from each of the points of view of the six different characters. Students listened to the scenes and offered feedback as to which character told each individual scene the best.

After that extensive feedback, each writer selected the one point of view for his/her own scene. We ended up with chunks of scenes told by all of the different characters. Our novel structure was coming together. We would be writing a novel from multiple points-of-view.

This, of course, added to the complexity of our challenge.

We sought some help along the way. Victoria Marini, Literary Agent from Gelfmann-Schneider, tweeted advice to my classes throughout the day. At that stage we had written our first scenes and sought advice for revision.

It took several months in order to craft a fairly cohesive story. I sought the help of students who wanted to work extra on the novel. They helped arrange the sections since we were no longer telling the story chronologically–remember each scene was only written once. So, when the reader gets to the character Elisabeth’s section, she is telling the story through moments no one else had mentioned. We found that this added an element of realism. After all, the things which impact each of us isn’t necessarily the same. It isn’t unusual for witnesses at an accident to report different events to the police.

Nevertheless, the input by the editorial team at CreateSpace really helped in this regard. We put the book through three rounds of extensive editing. After each round, the editorial team returned our manuscript with hundreds of edits and a half a dozen suggestions where we might rewrite or clarify for the sake of consistency or voice.

Our revisions reorganized and blended so much of the student writing that in many places it no longer looked like any one student’s work. We literally lifted lines and passages, moved them to another section, or completely rephrased an action.

Currently, we are marketing Qwerty locally–trying to get other students to purchase our book in order to support future endeavors with the project. I’d love to be able to give our student council at least half of the money back–since I plan on tackling the project again next year!

However, next year, I am planning a different twist–rewriting another opera–this time in verse–and then collaborating with the music department. We picked out an opera to reimagine. It too will be playing at Opera Philadelphia next year.

Our music teacher is planning on having her kids compose original music to go along with our novel. We envision QR codes being embedded in the text which would then take the reader to original music to help interpret the mood and tone. 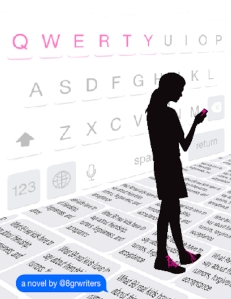 If you have any questions or would like to open up more dialogue about this project, please contact me at bjk925@gmail, or follow me on Twitter at @_briank_. Also, if you would like to support Qwerty, please look up our book at the link below and leave us a positive review!

Brian Kelley teaches eighth grade in rural Pennsylvania. You can find him online at http://www.walkthewalkblog.blogspot.com and on Twitter as @_briank_. His student writers also have a class account as @8grwriters. You can find more about their book Qwerty by checking it out on Amazon here.