Home » Author Posts » C. Alexander London Shares the Illustrations from The Wild Ones

C. Alexander London Shares the Illustrations from The Wild Ones

I am in awe of other’s people’s creativity, especially those whose imaginative powers are matched to incredible skill. I’m especially awed by visual artists, perhaps because I have no particular talent at drawing myself. I drew a lot of cartoons as a child, but always found myself frustrated by my own efforts. I had much more control of my words than of my lines and shading. As a creator, I gravitated to narrative, but I held a place in my heart for the illustration. In a way, my entire journey as a writer began with illustrations.

Back when I was a reluctant reader (which I’ve written about before), I was very fortunate to live in a house filled with books. Although I had no particular desire to read them, I would pull them off of the shelf and stare at the covers, stare at the illustrations, and make up my own stories of what they might be about. I daydreamed my own version of books into being. To this day, I still own some of my childhood books that I have never actually read. Trouble in Bugland: A Collection of Inspector Mantis Mysteries by William Kotzwinkle was a particular unread favorite. I marveled at Joe Servello’s color and pen-and-ink drawings of anthropomorphized bugs solving crimes in a Victorian London setting and I imagined up all kinds of talking bug adventures for the inspired by those drawings.

Another favorite book to stare at was Redwall, by Brian Jacques, with cover illustration by Troy Howell. It’d been in my classroom library for a while, along with two of its sequels, Mossflower and Mattimeo. Though I had no interest in reading such thick books with such little print (well, it seemed little at the time), I would dutifully take them home, stare at the robed mice wielding swords, the fox in the harlequin mask, the rodents in chains, and imagine a world of heroic animals living in castles and fighting in wars in the woods that were, somehow, just outside my perception. I studied the fantastical maps of fantastical worlds and wondered at what a map of my own daydream lands would look like. I never was quite able to render it on paper as gloriously as the book illustrations had inspired.

It took until late in fifth grade before I finally read Redwall, fell in love with reading, and set myself on the bibliophile’s path that would eventually lead to a masters in library science and a life writing novels.

But before all that, before the words, there were the images.

So it’s with absolute delight that I share Levi Pinfold’s astonishing illustrations for my newest novel, THE WILD ONES, which is, fittingly, the talking animal fantasy I had long imagined myself creating. I’m truly honored that an artist with his talent and care took my words and rendered them so beautifully into images that, I hope, will light up the imaginations of young readers.

Of course, I hope they also read the book.

You can’t have an epic fantasy without a map. While maps of fantasy worlds are often vast as nations, the world of the Wild Ones is compact to the size of alley scavengers, so the grand stage of their adventures is on rather smaller scale. I love how this image captures the chaos and clamor of the book’s world, Ankle Snap Alley, where we lay our scene. Though the place is small, there is nothing small about the danger lurking…

In my Brooklyn neighborhood we have a lot of feral cats. One of the bad guys in The Wild Ones is a particularly tough cat named Sixclaw, who is based on the cat that hangs out on the stoop next to my building. I’ve seen this cat get in scrapes and rumbles and always come out on top. This cat even stares down my dog! I love how this illustrations captures the ferocity of the real cat on which it’s based, without the artist having any way to know the story behind the character! I’m totally frightened by this image and because of it, I even look at the real neighborhood cat askance these day.

And of course, seeing this, I do hope one wonders what is going on with that woodpecker… 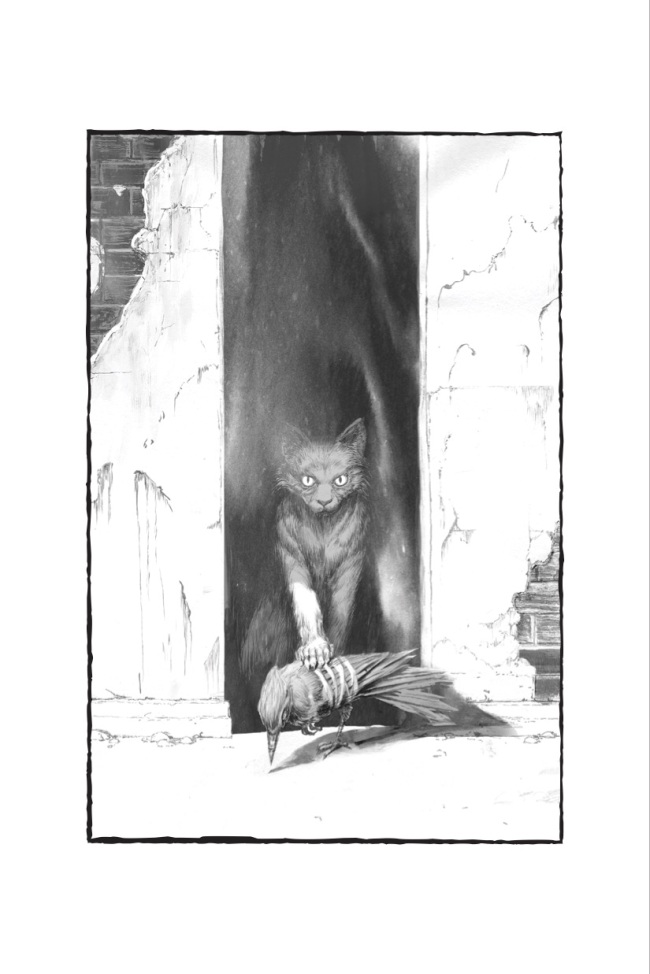 The scene this depicts was the first scene I wrote of the book. I knew I wanted to capture the rough and tumble nature of Ankle Snap Alley, the scams and flimflammery that our hero stumbles into right away. I love the jumble of creatures of all kinds, furred and feathered alike, who crowd this image, just as they crowd the tale I tell. The world of THE WILD ONES is a rough and tumble place and this picture evokes that for me. One thing I love about Levi’s art is the movement of it. This image feels alive. I can almost hear the raccoon’s ballyhoo as they call out their crooked game and the other animals cheer them on. Our poor hero in his little traveling hat has no idea the trouble he’s in for… 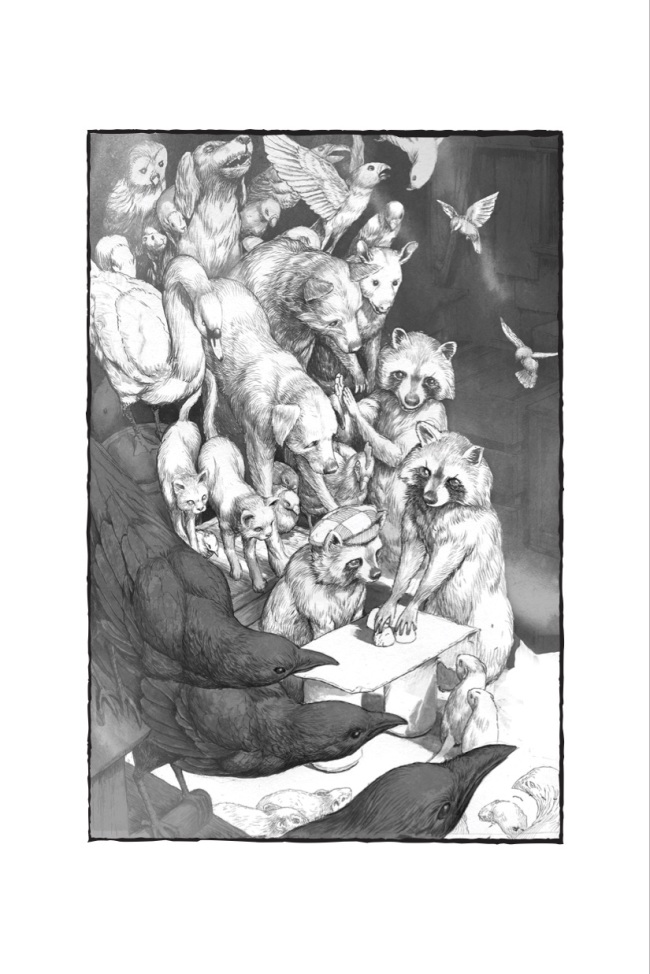 Okay, this is the one that’ll give me nightmares. I don’t want to spoil the plot, but let’s just say, our hero Kit has to go seek the council of the Rat King, a hundred rats who see with a hundred pairs of eyes, hear with a hundred pairs of ears, but speak in one voice. My editor, Jill Santopolo, told me that her main note as this image went through drafts was, “Ack! Too many rats!” So if you can believe it, this is fewer rats that were in the original drawing! But these rats, though they look quite scary, are not what they seem. Looks can be deceiving, and wisdom can come from the unlikeliest places. 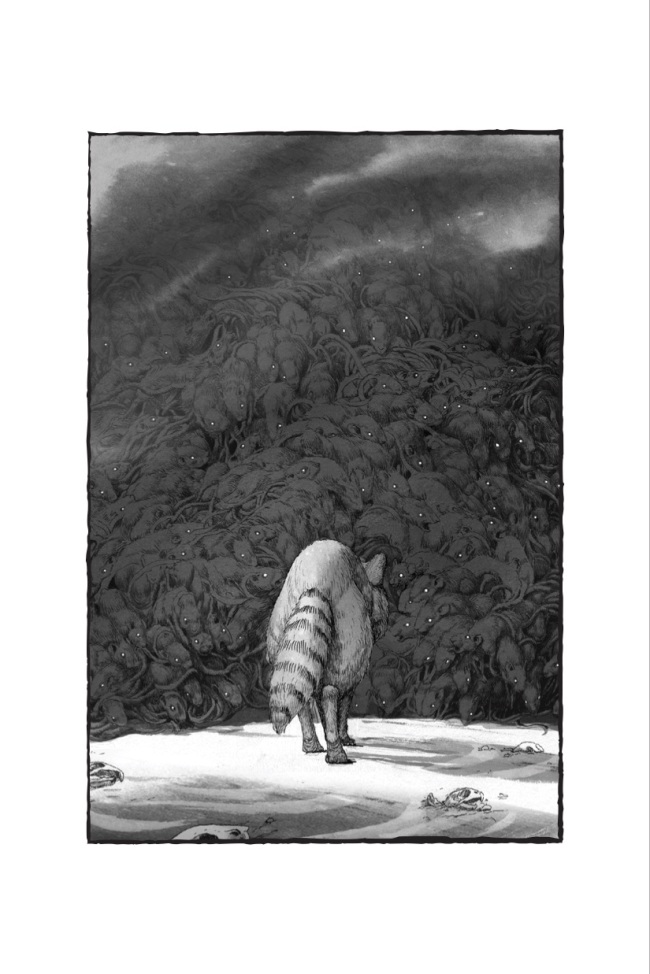 I couldn’t write a talking animal fantasy without an homage to Brian Jacques. So through the book there are some hidden references to Redwall. Perhaps the most obvious is Martyn, the church mouse, on whom our heroes will have to rely. He is a scribe of Ankle Snap Alley, and in this picture, one of his acolytes is delivering some very bad news. I love the looming shadows of the rest of the neighborhood, darkening the raccoons’ door. In The Wild Ones, community really is a character, and the presence of the shadows in this picture really evokes for me that nervous feeling as a newcomer to town knows his every move is being watched. How Kit responds will, of course, decide the fate of all of them!

Thanks so much for hosting me today on the blog! I cannot tell you how excited I am for readers to meet Kit, his friend Eeni, and the rest of Ankle Snap Alley in The Wild Ones.

C. Alexander London’s latest novel for children, The Wild Ones, is available from Penguin Books for Young Readers. He’s also the author of the middle grade series, The Accidental Adventures, Dog Tags, and Tides of War. His young adult debut, Proxy, was an American Library Association Top Ten Quick Pick for Reluctant Young Readers, a 2014 Best Fiction For Young Adults selection, and a 2015 Texas Lone Star Reading List selection. You can find him on Twitter @ca_london.

Like Loading...
← Reading Through My Book Gap: Maybe I Do Like Books With Animal Characters by Jillian Heise A Woman’s Place is in the House (and Senate!) by Annie McMahon Whitlock →