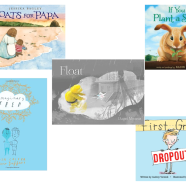 The Nerdy Book Club began as a book award blog. Dismayed that so many books our students (and we) loved to read were overlooked during book award season, Colby and I created a people’s choice award for children’s and young adult book lovers. While the blog has expanded beyond our original dreams for it, we still host the Nerdy Book Club Awards, or Nerdies, every December. The award finalists exemplify the best children’s and young adult books for the current year—as nominated by the readers of Nerdy Book Club blog readers. Imagine an up-to-date bookshelf of engaging, high-quality titles hand-picked by savvy librarians and teachers who read and celebrate children’s books.

We received hundreds of nominations for your favorite 2015 children’s and young adult books. If you took the time to nominate books for this year’s Nerdies, thank you. Reading authentic trade literature fosters children’s reading engagement and motivation. Your nominations provide great recommendations for families, libraries, and classrooms seeking good books for children to read.

Congratulations to our 2015 Nerdy Book Club Award winners. Your books offer children enjoyment and empowerment through your artistic visions of a better world. Thank you for improving children’s lives.

Boats for Papa by Jessixa Bagley

If You Plant a Seed by Kadir Nelson

Mango, Abuela, and Me by Meg Medina, illus. by Angela Dominguez

The Bear Ate Your Sandwich by Julia Sarcone-Roach

The Day the Crayons Came Home by Drew Daywalt, illus. by Oliver Jeffers

The Moon is Going to Addy’s House by Ida Pearle

The Nonsense Book by Eric Carle

The Princess and the Pony by Kate Beaton

The Whisper by Pamela Zagarenski

This is Sadie by Sara O’Leary, illus. by Julie Morstad

To the Sea by Cale Atkinson

Wolfie the Bunny by Ame Dyckman, illus. by Zachariah OHora 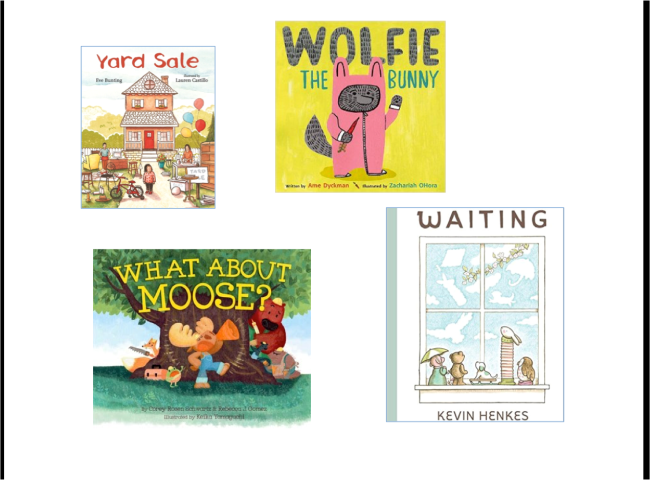 It has been a banner year again for picture books. Topics have ranged from toys that encounter winter for the first time (Toys Meet Snow by Emily Jenkins and Paul Zelinsky) to ghosts (Leo: A Ghost Story by Mac Barnett and Christian Robinson) and poverty (Last Stop on Market Street by Matt de la Pena and Christian Robinson). While all of the following are fiction, many have a firm grasp of reality even while the stories are told with our animal counterparts. Humor is present in so many of the Nerdies picture books, but prepare yourself to shed a few tears as well. May we have the envelope, please?

Picture books that manage to tell a complex story without words, textless books, provide us with an incredible read. Anyone can tell these stories in their own words, in English or Spanish or Hmong, in childlike structures or from adult perspectives.   Join a child on a rainy day and watch as various objects launch into puddles to Float or join the fun of diving deep into a Pool to watch fantastic scenes unfold above. Perhaps you would rather join a group of figures Waiting on a window sill, watching for something. Each of these books by Daniel Miyares, Jihyeon Lee, and Kevin Henkes demonstrate the power of the imagination combined with maybe a little patience.

Our animal friends appear in picture books each year. Often they play roles similar to those small children might in similar situations. Their presence is often hilarious as they encounter circumstances, which might be more familiar to humans than to animals. Imagine the consternation of a young rabbit when his parents take in an abandoned baby, a wolf, and treat it as lovingly as they would their own offspring. Wolfie the Bunny by Ame Dyckman and Zachariah OHora is certain to make readers guffaw as the older bunny sibling tries to get his parents to understand the danger lurking in the high chair. A beleaguered bear ends up unintentionally parenting in Mother Bruce. All Bruce wanted was some hard-boiled eggs; he certainly was not prepared to have goslings hatch and then imprint (terrific science lesson here) themselves in Ryan Higgins’ look at a very reluctant mother. Another bear appears in The Bear Ate your Sandwich by Julia Sarcone-Roach. When a bear gorges on berries and then falls asleep in the back of a truck, he is transported from the forest to the city. Thus begins a very convoluted tale of bear and missing sandwich.

A rabbit and a mouse plant seeds and protect those plants from the birds who would “harvest” them immediately in Kadir Nelson’s If You Plant a Seed. Nelson’s use of perspective and his hallmark focus on the eyes of the characters will draw readers into this story which is about more than planting seeds. It is about generosity and compassion as well (and might make an interesting text pair with Last House on Market Street). Moose would do well to learn more about generosity in What about Moose? by Corey Rosen Schwartz and Rebecca Gomez. Rhyming couplets tell of what happens when a bossy Moose tries to direct the building of a birthday gift for a friend.   What princess would not want a fine pony? Kate Beaton’s The Princess and Pony shows readers that looks can be deceiving.

Two books about color are sure to please readers and offer English teachers some terrific mentor texts to teach about color and symbolism. Red: A Crayon’s Story focuses on a crayon that is mislabeled. Being true to yourself is tough for anyone, let alone a crayon. In The Day the Crayons Came Home Drew Daywalt and Oliver Jeffers, neglected and lost crayons write postcards to their owner, Duncan, to remind him of their whereabouts.

Of course all good picture books, all books, call upon readers to use their imaginations, to dream along with the author s as they weave their tales. Imagination is essential if one is to have an imaginary friend. When lonely children wish for a friend, that is when Imaginary Fred comes to Earth. Eoin Colfer and Oliver Jeffers team up to discuss what happens after an imaginary friend is outgrown.   Another dynamic duo, Philip and Erin Stead, show how a boy conquers his gears by stitching together two guardians called Lenny and Lucy to protect him and his family from whatever might be lurking new their new home.   That thing lurking just might be a ghost. In Leo: A Ghost Story, Mac Barnett and Christian Robinson;s story is about a ghost in search of a friend. Friendship is a theme connecting these 3 books, but it also encompasses many other titles from 2015.

Teri Lesesne is a professor in the Department of Library Science at Sam Houston State University. She teaches courses in literature for children and young adults. You can follow her on Twitter (@professornana). She blogs about books (ls5385blog.blogspot.com) and about education (professornana.livejournal.com) when she does not have her nose buried in a book.

Like Loading...
← Establishing a Community of Readers by Brian Lawless The 2015 Nerdies: Nonfiction Picture Book Winners Announced by Karen Terlecky →