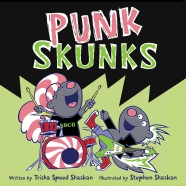 My Mixed Tape: The Making of Punk Skunks by Trisha Speed Shaskan

When I was a child, my family owned a bunch of records. My mother listened to Bob Dylan and The Rolling Stones. In fifth grade, I joined Band. Within a couple months, I traded in my soggy saxophone reed for drumsticks and a practice pad. In sixth grade, during an oral report, I sang and used that drum pad to add beats. The report wasn’t about music, but Sister Doreen the teacher welcomed the “musical” accompaniment. At home, I practiced on the pad, which I needed to test out before my parents would commit to “maybe” buying me some real drums. That year, my mother drove me to Minneapolis to see Prince’s Purple Rain tour. At the start of the show, the room darkened. The drums beat. Glowing drumsticks appeared. The spotlight shone on Sheila E. She broke into “The Glamorous Life.” I had the chills. I knew I had chosen the correct instrument!

At school, Sister Doreen encouraged my creative writing. When my family vacationed in New York City, I journaled about the trip in lieu of doing homework. I paid close attention to everything from the graffiti on the sides of the subway trains to the shapes of the skyscrapers. Sister Doreen also asked me to write a story to read aloud at my sixth grade graduation. I wrote a fable about a boy and a sunflower. One of the parents came up to me after the ceremony and told me how much she liked my story. My story felt important.

When I was a teen, my parents gave me a sparkly royal blue drum kit that I could play in the basement—only in the basement, but of course everyone heard it through out the entire house! My neighbor Adam who was a year older than me taught me how to play a rock beat. At middle school, I practiced as quietly as I could on my desk. With my right foot, I tapped the one and three beats (of a four count measure)—as if I was hitting the foot pedal of a bass drum. With my right hand, I tapped out the one-and-two-and-three-and-four-and beat of the high-hat. With my left hand, I hit the one and two of the snare. Then I took it to the basement where after many tries, I played a rock beat.

I spent most of my time in my bedroom listening to music and reading Edgar Allan Poe’s stories and poems, which I wanted to emulate. My parents gave me a typewriter. I typed up a book of poems. I explored feelings and metaphors on paper, but also in the lyrics and melodies of songs. Robert Smith from The Cure sang about the “six different ways” inside his heart, which became my heart. By the end of high school, Nirvana released their album Nevermind and the song “Smells Like Teen Spirit,” hit a nerve. It was raw and spoke to me. The nonsensical lyrics felt like rebellion, which made sense—especially to me as a teen.

As an English major in college, I studied stories and continued to write them. After college, I told my father I wanted to be an author. My parents gave me an IBM word processor. I started writing children’s stories. But I also needed a job. I worked at an afterschool program at a Minneapolis Public School where I taught month-long storytelling and creative writing classes to kindergarten through 5th grade students.

I had very little teaching experience, but learned by trial and error and advice from other teachers. I centered my class on picture books.

Every week, I went to the library and checked out stacks of picture books. Each picture book had its own music—whether it was repetition, rhyme, active language, or the voice. Raising Dragons written by Jerdine Nolen begins, “Pa didn’t know a thing about raising dragons. He raised corn and peas and barley and wheat…” What a voice! What a concept! Who could put that story down? Certainly not the students I taught. King Bidgood’s in the Bathtub written by Audrey Wood and illustrated by Don Wood is a poem that pairs the movements of the sun and moon with King Bidgood’s movements. But here’s the twist: from dining on an elaborate feast to dancing at a masquerade ball, the King does everything in the bathtub! The elaborate illustrations offset the hilarity in a magical combination.  In the classroom, I learned I loved picture books and I wanted to write one.

I also learned how much I enjoyed sharing music. Most of the students I taught connected to music and craved it. I started each class by having the kids sing the camp song sometimes called “Flea, Fly,” which uses call and response. It begins, “Flea. Flea, fly. Flea, fly, flow.” After the students learned the song, I let a student lead it. Soon, the class added their own lyrics and beats. Instead of repeating, “Oh, no, no, no,” they changed the response to “yes, yes, yes.” Claps became snaps. The students had made it theirs. From then on, no matter what or where I taught, I tried to find a way to include music.

At the school where I taught writing, my future husband Stephen Shaskan taught art. He and I were also assigned to watch over the students during morning and afternoon recess. In between playing tag, helping resolving fights over the swings, and jump roping, we connected over many shared interests—picture books, art, movies, and of course: music. We both liked everything from Funkadelic, to The Cure, to Devo, to The Kinks, and The Grateful Dead. At the time, I had dusted off my drum kit from my parents’ basement and set it up in my apartment. At his apartment, Stephen played guitar and keyboards. Eventually, we played music together and formed a band. I bought a new drum set. After I left the elementary school to teach high school English, Stephen and I married. We sang our vows, which was a pop song Stephen wrote called “Do I Love You?” At the reception, we played a couple songs—I was still in my wedding dress.

As educators, Stephen and I continued to share music with kids. As an early childhood educator, Stephen played guitar and sang songs he learned and songs he wrote. One of his originals, “The Dinosaur Song,” has kids stomp, roar, run, and sleep like dinosaurs. When I was a literacy coach at an after school program at a park and rec center, the students in my reading group decided they wanted me to bring in my drum set for their reward instead of playing games. We woke up the park! 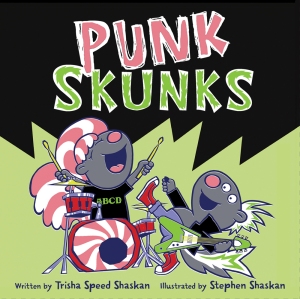 Because of our shared interest in music and the way the students we taught responded to music, Stephen and I decided to create a picture book together about two friends who play music. The idea of Punk Skunks was born, but it had been forming all along— from when I first hit the drum pad, wrote that fable, and read a picture book aloud to children. The jacket of Punk Skunks has a link where you can download two songs that Stephen and I wrote, played the music for, and recorded with the help of our friend/local musician Terry Eason. “We’re Buzz and Kit” is an introduction to the main characters. In the story, Kit plays the drums. Buzz plays guitar. “BSF (Best Skunks Forever)” is a song that occurs in the book. While visiting schools, Stephen and I are bringing the electric guitar and drums. We’re celebrating stories—and of course: music!

Trisha Speed Shaskan is the author of over thirty books for children, including Punk Skunks, which is illustrated by her husband Stephen Shaskan and available today!