Welles Crowther, a young executive with Sandler O’Neill and a trained volunteer firefighter from Rockland County, New York, perished on September 11, 2001, but not before he became many people’s rescuer. His heroism might have gone unrecognized had his mother, Alison Crowther, not read an article in The New York Times eight months later, in which one survivor described a rescuer as wearing a “red handkerchief.” Given to a young Welles by his father one Sunday morning during his childhood, he carried it with ritual and reverence for the rest of his life. The genesis of Rinaldi’s book is the ESPN short documentary that aired in 2011. Here are five reasons that high school students will benefit from reading Rinaldi’s book: 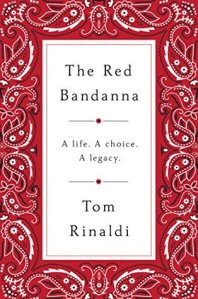 1: The narrative style invites all readers.

In its style one can hear the voice-over, and it creates an almost subconscious appeal. Readers of Rinaldi’s prose will get pulled into both the symbol and the narrative, just as all those whom Rinaldi interviewed were immersed in their own tellings of Welles’ story.

2: The book helps adolescents discern what matters most.

Welles Crowther was 24 when he died, but in his short life, he was faced with conflicts and matters of conscience that are common to all adolescents. His actions as an upstander at both Nyack High School and Boston College are well chronicled by his contemporaries. He struggled with career fulfillment, even after procuring a dream job, straight out of college, at one of New York’s top investment banking firms. Welles worked so hard that his boss never suspected his lack of satisfaction. But Welles wasn’t satisfied. He wanted to become a public servant. To make a difference. To change the world.

Students often struggle with authentic and purposeful research, and Rinaldi’s incisive inquiry is inspiring to young writers. His final product is clearly organized and well executed. Readers can appreciate how he carefully threads both narrative and research together. If you want budding teen writers to value the fruitfulness of the interview as a primary source, give them this book. For teaching skills such as quote selection and integration, choose a passage and teach backwards from it. Want to convey how writers vary their syntax or use meaningful vocabulary? Pick a page, any page.

Each year, my list of students who suffered the loss of a parent on September 11, 2001 gets shorter.  I live 20 minutes outside of Manhattan, and I remember the morning of September 11, 2001 quite clearly. That morning, my classroom had two pieces of technology that were vital to my students: a radio and a phone with an outside line. I remember one student, Harold, whose Russian pleadings to his mother required no translation. His mom made it home safely, but other parents never did. I can tell my 9-11 story every year, just as my father told me his vivid account of where he was when John F. Kennedy was assassinated. But the promise to “Never Forget” is best secured with a longer narrative than mine, or any individual teacher’s.

The book will make them cry. And then want to change their world.

Crowther’s heroism creates an emotional impact, but so, too, does the legacy of the red bandanna, the call to serve others first. As much as the story is Welles’, it is also about the survival of his parents and his friends, the work they do every day to share the integrity of Welles’ character with the world. It’s a story not only about one hero, but about how his generosity is a balm for those who have suffered his loss. We will all lose loved ones, and the luxury of preparing to do so is never guaranteed. In The Red Bandanna readers can empathize and rehearse, in their hearts and in their souls, for the day that such losses inevitably arrive.

Please note: A Young Readers’ Edition of The Red Bandanna will be released on September 5, 2017. The book is considered appropriate for ages 10 and up.

Oona Marie Abrams (@oonziela) lives and teaches in northern New Jersey. She and four other nerdy educators are organizing #nErDCampNJ, which will take place at Chatham High School on May 20th. Oona and her husband have four sons, all of whom are now proud recipients of their own red bandannas. They have read The Man in the Red Bandanna, a picture book written by Honor Crowther Fagan, and look forward to the release of the young reader’s edition.

Like Loading...
← It’s Hard Being a Hero by John David Anderson What Are the REST of My Kids Doing? Fostering Independence in the K-2 Reading Workshop by Lindsey Moses & Meridith Ogden →