Home » Author Posts » What I Was Thinking About by Laurel Snyder 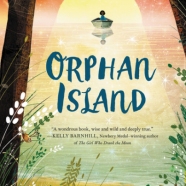 What I Was Thinking About by Laurel Snyder

The thing about unlikeable characters is… nobody likes them.

The thing about sad endings is… they make people sad.

The thing about unsolved mysteries is… they drive some people crazy. 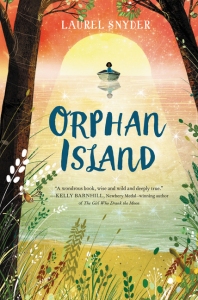 Almost exactly three years ago, I finished writing the first draft of Orphan Island, a project I’d been keeping secret up to that point. I wasn’t sure what I’d made exactly—if it was a bad book or a good book, or even a book at all.  So I sent it to my friend Rachel Zucker, who is a helpful reader, and more honest with me than anyone else.   She read it, and told me it was a good book.  So that was nice!

Then, as an afterthought, I sent her another document, a small scrap of writing.  A prologue.  An origin story.  About the island.

Rachel was emphatic and immediate in her reply.  “No!” she said.  “No, it closes off too many things.”

Because Rachel is always right, I killed the prologue that same day.  It was the right choice.

I was a mess. It was a very hard year. My family was in flux, and for complicated adult reasons that I didn’t fully understand, we had to move. I changed schools. I got my period. I started having complicated medical issues. This was the year when some girls had bras and others didn’t, and some boys were mean to the girls and some boys were still our friends, and meanwhile I was in charge of my younger siblings all the time and they drove me crazy but I loved them, even though all I wanted was to be left alone (or for somebody to pay attention to me).

It was a lot, being twelve.

And nobody seemed to have any interest in explaining anything to me. There were no answers. Not only that, I didn’t even know what questions I wanted to ask. But I could sense them, the questions. All around me.

At twelve, I was caught in the middle of things, and confused, and annoyed, and clueless. More than anything, I was annoyed at my own cluelessness, and how alone I felt in it.  In writing Orphan Island, I hoped to capture that feeling, that frustration and loneliness.

So yes, I could have included the prologue.  Or I could have written two more chapters at the end.  I could have tied up the story with a bow.  I know some readers will really wish the book had a bow on it. And if I’d been writing about being eight, or being twenty-eight, I might have.

But this is what I know for sure—when I was twelve, nothing in my life had a bow on it. I hadn’t even found the ribbon, or thought about how I might knot it.  And in trying to write a book for my twelve-year old self, I wanted, more than anything, to say, “It’s okay that you don’t know things. It’s okay that you haven’t even figured out all the questions yet.  It’s okay to feel crazy and yet still move forward. In fact, you have to.”

You want to know what really happens at the end of the book? This is the secret, the answer:  There is something on the other side of the mist. Of course there is. The little green boat will land somewhere, on solid ground.  And Jinny will be deeply confused and frustrated. And she will have to trust her instincts anyway.  Because she is twelve (or maybe thirteen), and that means she is learning to have faith in her own incredible resilience and power, and also in the universe.

I swear, I did not mean for this book to frustrate any grownups.  But in all honestly, I wasn’t thinking about grownups when I wrote it. I was thinking about twelve.

Laurel Snyder is a poet, essayist, and author of picture books and novels for children, including Orphan Island, Charlie and Mouse, Bigger than a Bread Box, and Swan, the Life and Dance of Anna Pavlova. She is also a graduate of the Iowa Writers’ Workshop, and a faculty member of Hamline University’s MFA in Writing for Children and Young Adults. She lives in Atlanta with her family and can be found online at www.laurelsnyder.com.