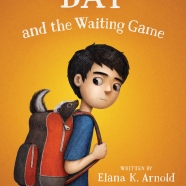 Cover Reveal for BAT AND THE WAITING GAME by Elana K. Arnold

I wrote A BOY CALLED BAT for the same reason I write all my books: because I felt compelled to. He came to me one night as I was driving: a boy with autism, whose initials spell “Bat,” who loves animals and vanilla yogurt. I felt Bat as clearly as I felt my own babies in my arms. I loved him instantly.

But the rewards of writing this book have been vastly different from the rewards of my previous books. So many parents, teachers, librarians, and kids have reached out to me to tell me how they relate to Bat, or how someone they love does.

This is a letter I received from a teacher, Katie R.:

Having a classroom with two students on the autism spectrum, I admired how the story was told from Bat’s perspective. I knew I had to get it into the hands of my students. During my book talk last Friday, I gave the typical summary of the story (without giving too much away) and read the book jacket. That led to a classroom discussion of, “What is autism?”

One of my students, who knows his diagnosis, shared his thoughts. Other students who have siblings on the spectrum shared their experiences. Then I shared a few examples of Bat’s words and actions from the book. My other student (whose parents have chosen not to tell him his diagnosis) said “This Bat kid sounds a lot like me. Tags bother me. Loud sounds bother me. I like my clothes in a certain drawer, too. I think I may have a touch of autism.” He finished the book in two days and said he loved it (high praise from him!).

His parents said it has opened a discussion at home and that, without them telling him, he is questioning things for himself. So I guess I just wanted to say thank you for writing this book for our young students. Giving them a character to identify with has been so powerful for this reader of mine.

When I received this letter, I went outside to take a walk. I had to find a quiet place where I could sit alone and imagine the student, this boy who felt a kinship with Bat. I sat on a bench in the park near my house, I closed my eyes, and I focused on my gratitude for the teacher who had shared Bat with this student.

The process of writing and sharing this book has made me feel more connected to the community of writers, readers, teachers, librarians, and book lovers than I have ever felt in my life. I even had the great privilege of sharing A BOY CALLED BAT with one of my heroes, Temple Grandin, who said the book “…will help children understand autism and that everybody loves animals.”

The responsibility of writing Bat’s stories has been great, as well, and I continue to research, listen, and learn from a vital community of autistic people both in the children’s book world and the greater population.

It was my pleasure and my privilege to return to Bat’s world with BAT AND THE WAITING GAME. One of the greatest things about getting to write another BAT book was the anticipation of seeing more art by the brilliant Charles Santoso. As I worked on the book, I thought over and over again, “Oh, I can’t wait to see what Charles does with this scene!”

I may never again write a character who is as dear to me as Bat, and it is one of my life’s greatest pleasures to find that he is beloved to others, too. Thank you, teachers, librarians, parents, and advocates of children, for sharing Bat with your young readers and friends. 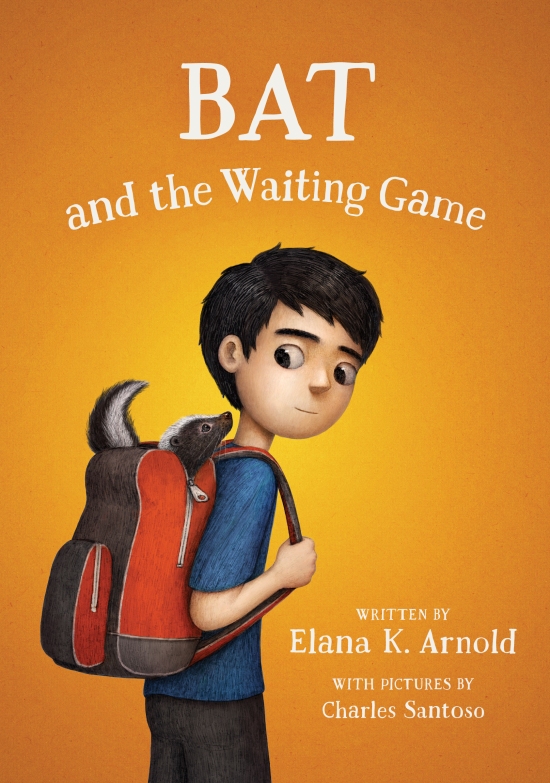 Bat and the Waiting Game by Elana K. Arnold and Illustrated by Charles Santoso
Publication Date: March 27th 2018
For Bixby Alexander Tam (nicknamed Bat), life is pretty great. He’s the caretaker of the best baby skunk in the world—even Janie, his older sister, is warming up to Thor.
When Janie gets a part in the school play and can’t watch Bat after school, it means some pretty big changes. Someone else has to take care of the skunk kit in the afternoons, Janie is having sleepovers with her new friends, and Bat wants everything to go back to normal. He just has to make it to the night of Janie’s performance. . . .
Elana K. Arnold returns with another story of friendship starring an unforgettable boy called Bat.
Elana K. Arnold grew up in Southern California, where she was lucky enough to have her own perfect pet – a gorgeous mare named Rainbow – and a family who let her read as many books as she wanted. She is the author of picture books, middle grade novels, and books for teens. She live in Huntington Beach, California, with her husband, two children, and a menagerie of animals. You can find her online at www.elanakarnold.com

Like Loading...
← Fake News, George Washington, and the Plight of the Overworked History Educator by Ben Thompson #TeamEverybody by Shelli Thelen →