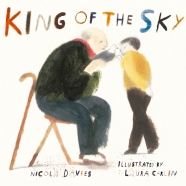 RESPONSE TO THE NYT ‘BEST ILLUSTRATED 2017’ by Nicola Davies 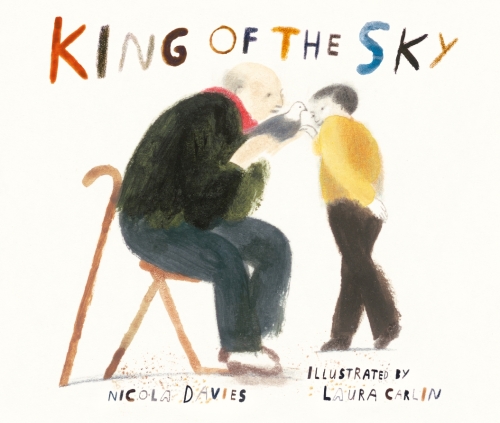 It’s incredibly exciting to be featured anywhere in the pages of the New York Times, but to be picked as one of the ‘Best Illustrated Books of the Year’ is toe tingling. To be picked twice is beyond amazing. I was in Montreal when ‘The Promise’ was featured as among the best picture books of 2014 and I’ll never forget opening the pages of the paper in a little French corner cafe, and seeing Laura’s wonderful artwork reproduced. I won’t get to see a ‘real copy’ this time as I’m at home in Wales, but I’m hoping someone will send one over the Atlantic for me.

The two books Laura Carlin and I have created together demonstrate that picture books really do not have to be about talking animals or underpants, that they can address the biggest issues and carry important emotional messages. The Promise was a story about personal transformation, and about our responsibility to the environment. King of the Sky is about home and what that means. Both stories work on all sorts of different levels. I’ve had emotionally disturbed children tell me that ‘The Promise’ is “about me!” and I’ve been informed that copies are passing hand to hand across worn torn regions of Afghanistan. Welsh-Italians have tearfully informed me that in King of the Sky ‘tells the story of my family”.  King of the Sky certainly opens up a conversation about home, and what it means. So it might help a child understand something of the experience of refugees, or just help cope with moving house.

Before the book was published I helped to create a theatre production of King of the Sky that toured in South Wales. The audience response from both adults and children was extraordinary and I knew they’d warm to the book when it came out. The story has resonances for anyone whose family has had to find home in a new place, so it’s not surprising that cosmopolitan New York should love the story as much as its home territory of South Wales.

Working with Laura is wonderful. Although we hardly ever get to meet, we totally love each other. I know that I can completely trust Laura to do something magical with my words.

I don’t have to explain the story to her, she gets it at once, then makes it her own and brings out some new expression of the narrative that I would never have imagined. The very best thing that can happen when an illustrator shows you their responses to your words is surprise -a rush of excitement when you see that they have added new layers of meaning, and truly made words and pictures more than the sum of their parts. I feel profoundly grateful to be working with someone with such a big soul, and who is, in very sense, a true artist. I’m hoping we can find a way to work together again – for years we’ve talked about a book that tells a story from the Arctic, about ice and sky; I can hear it speaking to me already.

THE ORIGIN OF KING OF THE SKY

King of the Sky began its life as a nonfiction text about pigeons. I researched the biology of their flight and navigation, and their long association with humans as the valiant bearers of some of history’s most urgent and important messages. I was struck by the parallels between the features that pigeons use to recognize a place and the features we humans use. Having, at that time, recently moved to a new place, I noticed how the things that made it seem unfamiliar at first, were exactly the things that quite quickly came to be synonymous with ‘home’ for me.
So, as I read more about the extraordinary ‘homing’ abilities that underpin all pigeon journeys, the story that took shape in my head was less and less about the biology of pigeons, and more and more about belonging and what that means to human beings.

I began to think about children displaced from their homes by war, conflict, chance and searched for a setting that would connect a child in a new and unfamiliar place, far from home with the journey of a racing pigeon from its home loft and back again. I looked at information about pigeon racing – where birds are released in an entirely unfamiliar location, far from home and then fly back – and remembered the baskets of racing pigeons that I’d see at the station as a child.

Finally, two things gave me my story. The first was hearing a friend sing ‘the King of Rome’ a song (recorded by June Tabor) about a Sheffield man who bred a pigeon that won a race from Rome back to Yorkshire just after the First World War. And the second was realizing that my setting was right on my doorstep and connected with my own family. I come from a long line of steel workers and miners from South Wales- my grandfather’s Davy Lamp stands on a table in my living room. Many Italian families come to South Wales in the early 20th century to set up cafes known locally as ‘Bracchi. The two communities had a lot in common – a love of family, of singing and of big emotion. As one commentator put it ‘the Welsh are just Italians in the rain.’ The ‘Italian Welsh’ remain a big part of South Walian life and culture.

So my story is set in the South Wales valleys, in a little mining town, on a rainy hillside, where the pit-head machinery dominates. A little boy from Rome comes with his family to seek a new life in this apparently unpromising environment.

The boy in King of the Sky, speaks directly to the reader about what he feels. He doesn’t explain or justify, he just says what the reality is for him. It’s up to the reader to wonder why he might feel the way he does, and to look for parallels in their own life, or in the lives of others around them. I’d like it to prompt readers to think about migration and refugees – to see it’s not new, to see that countries are enriched by new peoples and new cultures, and to understand that ‘welcome’ is the best response and the quickest way for us all to feel at home.

Nicola Davies is the award-winning author of The Promise, also illustrated by Laura Carlin, which received a special honorable mention in the Bologna Ragazzi Award fiction category. Nicola Davies’s many books for children include Outside Your Window: A First Book of Nature, Ice Bear: In the Steps of the Polar Bear, and Big Blue Whale. She lives in Wales.