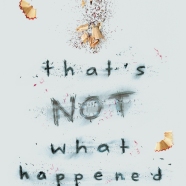 Cover Reveal: That’s Not What Happened by Kody Keplinger

I’ve known for many years that I wanted to write a book about a school shooting. I think the first time the idea came into my head was my junior year of high school. We’d gone into lockdown, and I’d assumed it was one of our annual drills. We’d been doing them since third grade, and they’d become mostly routine. My pre-calculus teacher had ushered us all into the corner of the room, away from doors and windows, turned the lock, shut off the lights, and just kept teaching, her voice slightly hushed. We had a test coming up, and there was no point wasting time just because of a drill that would last maybe five minutes.

But five minutes came and went. And sometime later, the bell rang, signaling us that it was time to switch classes, but we were in still lockdown. Our teacher, confused and concerned, called the front office.

It wasn’t a drill.

I didn’t know what was going on outside that classroom. I ran through a million scenarios in my head, each worse than the one before. I’ve been drawn to storytelling my whole life, but that creative part of my brain is a torment when I’m scared.

In the end, no one was hurt. We’d gone into lockdown because another teacher had found a threatening note on her desk. The student who wrote it confessed, having not realized the panic it would cause. After the lockdown, the school day went on as normal. But that half hour of quiet panic stuck with me, and I remember thinking, “I’ll use this fear to write a story one day.”

That’s Not What Happened isn’t the story I thought I would tell, though. After nearly a decade and half a dozen ideas that I never followed through on, I’d largely given up on the notion of writing about a school shooting. But then I heard Lee’s voice in my head.

I know, that sounds strange. But it’s how many of my novels have started. Just a line or two, in a character’s voice, popping into my head at the oddest moment. In the case of Lee Bauer, that moment was while I walked my dog one night in early 2016. I’d been thinking a lot about mass shootings; it seemed like they’d come one after another in the previous year. And, while browsing some true crime nonfiction, I’d found myself reading a book about Columbine (which, while not the first school shooting in the US by any means, was the first to capture the 24-hour news cycle). I’d been thinking about the bizarre fanbase some of these mass shooters—particularly the young white men—seem to have, and how their names go down in history while it feels like we never remember the victims. 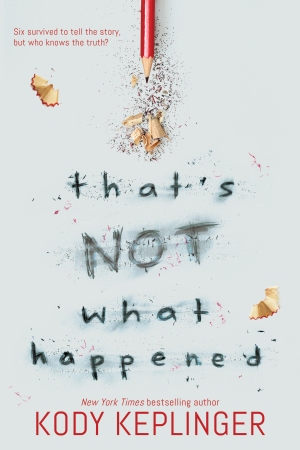 Amidst all these jumbled thoughts, I heard the “voice” of a teenage girl, breaking the fourth wall as she tells the reader that she isn’t going to say his name, because this isn’t a story about him—the shooter—but instead, it’s about the victims and survivors whose names are forgotten.

It was still a few months before I started writing, but Lee’s voice never left my mind. I began doing some of the most upsetting and disturbing research of my life as I attempted to figure what her story was. Eventually, I realized that this thing that had been swimming in my head for months wasn’t a book about a school shooting. Not exactly. But rather about the way our society talks about tragedy and the impact that can have on survivors.

And it wasn’t about the shooter at all. Just as that first hint of her voice in my head said, I chose to omit any use of the fictional shooter’s name in the book. Both for character reasons—Lee has no sympathy for him and feels he’s gotten enough attention from the media already—and for reasons of my own. After so much research, I realized how obsessive and devoted some people can be toward even fictional school shooters, searching for their redemption, seeking to make them an antihero or a victim in their own right. I realized early on that I didn’t want him to overpower the narrative or draw attention away from the survivors. So throughout the novel, his name is either omitted or blacked out.

The more I researched and wrote, the more Lee’s voice—and the voices of the other survivors—crept into my head and heart, the more I began to reevaluate my own perceptions. I had to examine how I’ve discussed tragedy in the past, my own tendency to buy into sensational narratives, my own guilt of remembering murderers’ names and forgetting the names of their victims. I now realize so much of what I thought I knew about these horrific events, what I’d repeated, certain it was fact, was wrong. Because I’d stopped paying attention before all the facts could be reported. Writing this book made me realize that I’ve been part of the problem.

As I said, That’s Not What Happened isn’t the story I thought I would tell. While there are still fragments of the ideas my anxious mind conjured during that lockdown over a decade ago, it took on a direction I never expected. It led me down a path that was painful, but I think necessary in helping me explore how our society processes this sort of horror, and my own culpability, how I’ve discussed and thought about tragic events in the past.

I’m proud of every book I’ve written. I think I’ve learned a little something, usually about myself, from each one. But That’s Not What Happened is different.

This one changed me.

KODY KEPLINGER grew up in a small Kentucky town. During her senior year of high school she wrote her debut novel, The DUFF, which is a New York Times bestseller, a USA Today bestseller, a YALSA Top Ten Quick Pick for Reluctant Readers and a Romantic Times Top Pick. It has since been adapted into a major motion picture. Kody is also the author of Lying Out Loud, a companion to The DUFF; Run; Shut Out; and A Midsummer’s Nightmare, as well as the middle-grade novel, The Swift Boys & Me. Kody currently lives in New York City and writes full-time. You can visit her online at www.kodykeplinger.com.