Home » Author Posts » What comes first, the people or the place?! by Jacqueline Alcántara

What comes first, the people or the place?! by Jacqueline Alcántara 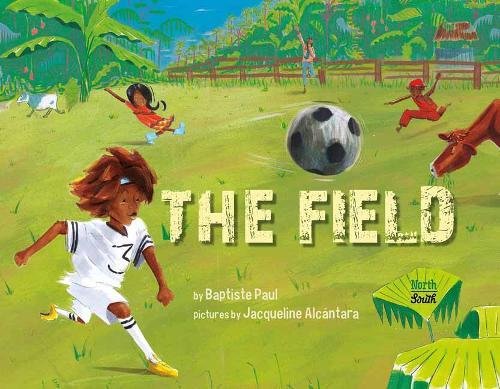 When I started sketching ideas for The Field, I was completely focused on who the characters in the book would be. I love drawing people above all things, so this was natural for me. On the first read, I had a really clear vision of the setting and the action, but as I continued to reread the manuscript thoughtfully, I realized how much had been left open to interpretation; who is playing, who is speaking the dialogue, who scores the goal, who is the main character,?!?

I became completely wrapped up in creating the cast: What were the background stories for each player? What would their outfits look like? What was their style of playing soccer? How would I draw their hair, noses and eyes?

I gathered ideas from memories, family, as well as the internet, and came up with a diverse cast with good Caribbean vibes. But I struggled in deciding who was the “main character” because I felt as though the story was really about all the players and the game itself. I wondered, ‘How do I visually make it feel like it’s about everyone’s experience, yet have a main character that leads us through the story?’

As I was sharing my sketches with my mentor (at the time Carloyn Dee Flores), she advised me, “Don’t forget about the other characters!”

‘Other characters?!?’, I asked myself, ‘didn’t she just look at all my fabulous character sketches and compositions?!’

“The Field! The Storm! Don’t forget they are characters in this story too,” she clarified.

‘Ohhhh. Right’, ‘The Field,’ I thought, remembering the title of the book.

Before her insight, I hadn’t even considered the field itself to be a character! Of course, I had thought about details of the setting – how I would draw a banana tree, what colors the houses would be, how the lighting would change, etc.  But I had not treated it as a character in terms of thinking about its relationships to the other players, the game, and the storm!

Keeping this in mind, I concentrated on making a narrative for the illustrations that centered around the dynamic between the players and the field that is calling for them. The field itself became my main character.

As I continued my research, I watched kids and adults around the world playing soccer, – on rooftops in Japan, dusty fields in Cambodia, alleys in Jamaica, I realized that “the field” is wherever the game begins – it’s what allows us to dream of new friends, new adventures, and all the goals yet to be made and realized.
Play on!

Jacqueline Alcántara is a freelance author and illustrator. She spends her days drawing, painting, writing and walking her dog. Jacqueline studied art education, attended a summer intensive at Parson’s New School of Design, and went on to enroll in the Illustration Certificate program at the School of the Art Institute in Chicago. She has managed an art gallery in Chicago, worked at NBC’s set decoration department, and at Soho House Chicago. She is particularly excited about promoting inclusiveness and diversity in children’s literature and the illustration field in general. In 2016, she won the inaugural We Need Diverse Books Illustrator Mentorship Award. Find out more at: jacquelinealcantara.com

Like Loading...
← The Power of Storytelling by Baptiste Paul CURIOUS GEORGE IS HIS OWN MONKEY by Corabel Shofner →