Last November, I had the opportunity to meet Randy Ribay at NCTE in Houston, where I received a signed copy of his novel After the Shot Drops. Ironically, I haven’t gotten my hands on the book for several months, because it is constantly checked out of my classroom library. Recently, though,  I received several advance reader copies of Ribay’s newest novel Patron Saints of Nothing, which I’ve just finished, along with a small group of student beta readers. Whether you teach it as a whole class novel, share it in literature circles, or recommend it for independent reading, it has a place in all high school classrooms. Here’s how you can use the book right now:

At #NCTE18 with Randy Ribay, who’s signing the book that will disappear until June.

1) As a Mentor Text for Fiction Writing

As my students and I revise their fiction portfolios, we often turn to examples from the books we’re reading to help us to kick up our craft moves. Students need to be exposed to a variety of strategies to introduce characters in new settings. In this excerpt, the protagonist Jay visits the slums his cousin Jun inhabited before his tragic death: “I take in my surroundings with new eyes, trying to grasp how my brilliant, compassionate cousin who was bursting with energy could have ended up in the slums. I try to imagine him begging for money, playing cards, selling cheap merchandise, or silently watching from the shadows.” Here, Ribay characterizes both Jay and Jun through internal monologue and description of setting. Even a quick mini-lesson like this can inspire and instruct student writers on how to add details to their drafts for a variety of purposes.

Full disclosure: This was a sub plan that I left recently, and it worked beautifully. In the novel, Jay discovers some of his late cousin’s books, and he spends time reading them. Jay is particularly wowed by his cousin Jun’s collection of poems by Audre Lorde, and he mentions “A Litany for Survival.” I asked students to find connections between the poem and the novel, and they did not disappoint! Close reading of the poem wasn’t a burden, since they used their knowledge of the novel to interpret how and why the poem would be meaningful to the characters, plot and themes. There are several other authors and texts referenced in the novel, and a series of extended learning experiences could be designed, particularly for students who might benefit from further enrichment.

3) To Teach the Value of  Research and Inquiry

The topics in the novel are global, timely, and relevant. Jay’s cousin Jun dies suddenly and mysteriously in the Philippines, and as the story unfolds, Jay learns about his cousin’s entanglement in the country’s turbulent and controversial war on drugs. Jay is on limited time to find out what exactly happened to Jun, and what the mystery is behind his cousin’s  tragic death. In the story, he conducts action research, going out and interviewing the people in his cousin’s life. He also learns to question the answers he receives. Like Jay, many students are unaware of the war on drugs in the Philippines, and the political upheaval surrounding it. Before, during or after reading the novel, students can take a deep dive into news articles, video clips and other informational texts to learn more about this controversy. 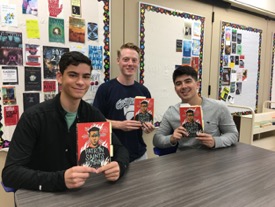 The novel’s protagonist, Jay, is a second semester senior, and I’ve got four sections of them, so check the Reader Response lense off the list. Jay is facing a crisis of identity, after having been rejected from several colleges and accepted to his “safety school.” His major is undecided, motivation is lacking, and he plods his way through his second semester, playing video games and hanging out with friends. (Psychological lense: check.) When Jay travels across the world to visit his Filipino family, aware of his American perspective, he reminds himself, and is often reminded by his aunts, uncles and cousins, of his “otherness” there. (Marxist lense: check.)

5) To Appreciate the Value of Intersectional Narratives

Ribay’s novel contains a great deal of moral ambiguity. For example, early in the story, Jay shares how his cousin Jun has criticized the Catholic Church, and Jay also questions his family’s faith practices; yet later on, it is evident that the Church is where both Jun and Jay find refuge and sanctuary. Jay is simultaneously bored by time-honored rituals and paradoxically comforted by them. Piecing together the mystery of his cousin’s death, he is also assembling multiple narratives of his own identity. Through Jay’s experience, students can better appreciate that they are not a single story, and that those around them are not living single stories either.

Finally, I have my own bonus take-away! Many teachers have been sharing pictures of their notebook spreads in Penny Kittle’s Book Love Foundation Summer Book Club group on Facebook.  I challenged myself as I read Ribay’s story to track beautiful language in my notebook. It was a new approach for me, but it helped me to reframe some of the ways in which I have asked students to record their thinking about what they read. Engaging in this new process gave me a freedom that double entry logs and annotated post-its seldom do. As summer approaches, I’m going to continue to do this with books that I read and think about how to introduce this to students in the fall.

Oona Marie Abrams (@oonziela) teaches high school English in northern New Jersey. An organizer of #nerdcampnj, she is an active member of NCTE, ALAN, the Council on English Leadership and New Jersey Council of Teachers of English.

Like Loading...
← SEEK THE TRUTH, BUT GIVE IT TIME by Ammi-Joan Paquette Claire’s Day: Celebrating Young Readers by Julie K. Rubini →