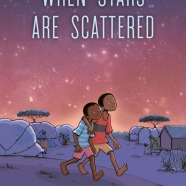 How did you two meet?

OMAR: We met when Victoria visited Church World Service, the organization I work for that is dedicated to showing welcome to refugees, immigrants, asylum-seekers and other uprooted people within the United States, who are seeking safety and the opportunity to rebuild their lives. I was introduced to her by my coworker Christine Bear who was showing her around the office. After the introduction, Christine told Victoria how I always wanted to write a book.

VICTORIA: I had recently moved to Pennsylvania, and I wanted to continue volunteering with a local organization that provided services to refugees resettled in the US (as I had been doing in Oregon). At the same time, I was already thinking about how I might put my background as a graphic novelist to use—what would a graphic novel about one person’s experience as a refugee look like? I feel very lucky that I met Omar that day.

Describe the process of co-authoring this book. How did the story come together?

OMAR: I always wanted to write a book based on my personal story and I had already written a 10-page draft of my story. After a short discussion with Victoria, she told me about her background writing children’s books. I offered Victoria to have a look at my rough draft and we scheduled a meeting after that. We regularly meet, email, call, and text to gather information or to follow up with each other.

VICTORIA: Omar’s rough draft, and our first meetings, were a chance for me to get to hear about Omar’s experiences, and his younger brother Hassan, and what their daily life was like growing up in a refugee camp. After each meeting, I would write up what we discussed, and I’d come up with new questions to ask at our next meeting. After we had a good structure set up for telling the story, I started adding sketches and putting the manuscript into a graphic novel format. I was in contact with Omar regularly to make sure the drawings I was doing were accurate.

When Stars Are Scattered takes place over a specific period of time in Omar’s life – how did you decide what to tell in the story?

OMAR: We decided to tell the story in chronological order. We started from my childhood since our target readers were young readers.

VICTORIA: Since this is a middle grade graphic novel, the story begins when Omar is roughly 11. There were pivotal scenes we wanted to include that happened earlier in Omar and Hassan’s lives, which describe how and why they were forced to flee their birthplace of Somalia and become refugees, so we did this in a flashback.

The illustrations really bring the location and people to life. What was it like to draw inspiration from real people and places?

VICTORIA: Omar didn’t have any pictures available of himself and Hassan as children, so I had to imagine what they would look like! Several other characters, like Omar’s classmates in the book, were fictional, so I looked at images and videos from kids in Dadaab to draw them. Omar, how did it feel to see yourself as a drawing?

OMAR: I was impressed by Victoria’s skills in the illustrations and how she added so many details. I am happy with her work and didn’t have any experience in that part.

What message do you want readers to take away from this book?

OMAR: There are a couple of messages readers can take from this book.  One is to never lose hope or faith. We always have plans, but God has a better plan for us.  I hope readers gain an understanding of how no one would ever want to leave their country unless circumstances force them to leave.  Never abandon the ones you love most because they are in a bad situation or you are in a bad situation.  And finally, one kind action can have a huge influence in another’s life. 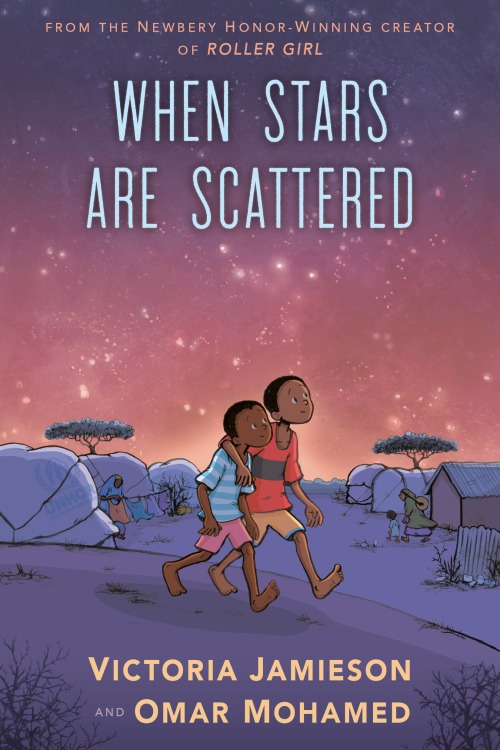 Heartbreak and hope exist together in this remarkable graphic novel about growing up in a refugee camp, as told by a Somali refugee to the Newbery Honor-winning creator of Roller Girl.
Omar and his little brother, Hassan, arrived in Dadaab, a refugee camp in Kenya, seven years ago. Their father was killed the day they left home, and they haven’t seen their mother since they joined their neighbors who were fleeing to Dadaab. Now Omar is eleven and Hassan is nine, and Omar has quit school to look after his brother, who has an intellectual disability.
When Omar is given the opportunity to return to school and carve out a future for himself and Hassan, he feels torn. He loves school and could have the opportunity to earn a coveted scholarship to a North American university—and with it a visa for himself and Hassan. But is it worth the risk and heartache of leaving his vulnerable brother for hours each day?

Victoria Jamieson is the creator of All’s Faire in Middle School and the Newbery Honor Book Roller Girl. She received her BFA in illustration from the Rhode Island School of Design and worked as a children’s book designer before becoming a freelance illustrator. She has also worked as a portrait artist aboard a cruise ship, and has lived in Australia, Italy, and Canada.

Omar Mohamed spent his childhood at the Dadaab camp, after his father was killed and he was separated from his mother in Somalia. He devoted everything to taking care of his younger brother, Hassan, and to pursuing his education. He now lives in Lancaster, PA, with his wife and five children, and works at a center to help resettle other refugees.

Iman Geddy is an Atlanta-based designer and illustrator who is passionate about using the graphic arts for social good. Inspired by the geometric harmony of Islamic architecture as well as the colorful equatorial landscapes of eastern Africa, she creates striking art that highlights the beauty of the world around us.

Like Loading...
← MY LOVE AFFAIR WITH RHYME by Kate Hosford “I’m Glad You’re My Child’s Teacher” by Torrey Maldonado →