Home » Author Posts » YOU CAN FIND YOUR WAY: Map Reveal and Excerpt of QUINTESSENCE by Jess Redman 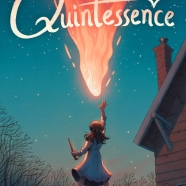 YOU CAN FIND YOUR WAY: Map Reveal and Excerpt of QUINTESSENCE by Jess Redman

When I was twelve years old, my family moved from Philadelphia to West Palm Beach, and my panic attacks returned.

I had been having panic attacks off and on since I was nine, the first one breaking like a rogue wave inside of me one night as I lay in bed, adrift on a sea of sleeplessness and worry. Over the next three years, my anxiety waxed and waned and morphed and sometimes even seemed to disappear entirely. But it would always reappear, usually in response to an external stressor.

That cross-country move was very definitely an external stressor, and during that first year in my new home, I felt lost, and I worried constantly that I was going to stay lost. I worried that I was never going to find my way.

In my new middle-grade book, QUINTESSENCE, Alma has just moved across the state, from Old Haven to Four Points, and on her third day at her new school, she experiences her first panic attack. Her parents try to figure out how best to help her, but none of their suggestions seem to work. There is a map of Four Points in Alma’s parents’ office, and although Alma has traced paths with her fingers, memorizing the mountains and rivers and forests and cave systems depicted there, she feels lost in this new town.

Then one night, Alma watches as a star that looks like a golden child falls from the sky and into her backyard. Alma is lonely and far from home, but no one, she realizes, could be farther from home than a fallen star. And so, together with three, interconnected friends who are lost in their own ways and a mysterious figure who owns an even more mysterious shop, Alma sets out to save the Starling.

And in the process, little by little, step by step, Alma begins to find her way.

This is why I was so thrilled to learn that QUINTESSENCE was going to have a map—because QUINTESSENCE is a quest story. There is a magic-infused town, a book of medieval alchemy, and explorations of STEM topics, like astronomy and chemistry. There are supernovas and observatory towers, enchanted telescopes and plot twists, four elements to gather, characters who are more than they seem, and lots and lots of biking around in the middle of the night. Yes, QUINTESSENCE is magical quest story but with the very real heart of a lost girl at its center.

As an adult, I became a therapist, in part because I wanted to help adolescents who struggled the way I had. That’s part of the reason I started writing for young people too.

And what I hope readers who are anxious—and there are many of them—and readers who feel lost for any number of reasons hear as they journey with Alma is this:

Yes, the world changes. Yes, you are changing too. Yes, it can seem overwhelming and confusing and too much sometimes.

But you can ask for help. You can feel your feelings. You can believe in magic and seek out wonder.

You can find your way.

Jess Redman is the author of The Miraculous, which Kirkus called “layered, engaging, and emotionally true” in a starred review. She is a therapist and currently lives in Florida with her husband, two young children, an old cat named SoulPie, and a fish named Annie.

Quintessence is an extraordinary story from Jess Redman about friendship, self-discovery, interconnectedness, and the inexplicable elements that make you you.

Find the Elements. Grow the Light. Save the Starling.

Three months ago, twelve-year-old Alma moved to the town of Four Points. Her panic attacks started a week later, and they haven’t stopped—even though she’s told her parents that they have. She’s homesick and friendless and every day she feels less and less like herself.

But one day she finds a telescope in the town’s junk shop, and through its lens, she watches a star—a star that looks like a child—fall from the sky and into her backyard. Alma knows what it’s like to be lost and afraid, to long for home, and she knows that it’s up to her to save the star. And so, with the help of some unlikely new friends from Astronomy Club, she sets out on a quest that will take a little bit of science, a little bit of magic, and her whole self.

At the very center of the town of Four Points, there was a shop called the Fifth Point.

The Fifth Point was a shop, yes, but one that had never sold a single thing. It was small and square and brick and tucked between a coffeehouse and a launderette so that the air around it always smelled both bitter and sweet.

On each of the shop’s four sides, there was a display window, with panes of glass so grimed and grubbed and smudged that nothing on display could possibly be seen. And next to each window, there was a door.

And above each door hung a wooden sign, with script that had once been glinty gold but was now tarnished and spotted. The signs all read:

Open by Appointment Only

But plenty of people had been above it.

Because rising out of the top of the Fifth Point was a twisting, taper- ing, midnight-black iron spire that blossomed—high above the other shops, high above the town of Four Points—into a star-shaped plat- form.

And on all four corners of the shop, welded to the roof, fixed and firm, there were ladders. Ladders with this message engraved on their eye-level rungs:

See the lights above. Grow the Light inside.

Like Loading...
← This Boy and the Myth of the Happy Novel by Lauren Myracle A Bit About Wink – Rob Harrell →