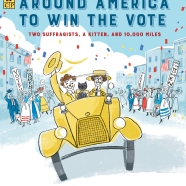 Rescuing Our Heroines by Mara Rockliff

and a wee black kitten with a yellow ribbon tied around its neck.

—Around America to Win the Vote

The two women were named Alice Burke and Nell Richardson, and I first encountered them in a Smithsonian blog post, “Traveling for Suffrage.” To help win the vote, they would drive their little yellow car around the whole United States—ten thousand bumpy, muddy, unmapped miles. They’d push through a raging blizzard, join up with a circus parade, get lost in the desert for days, even dodge a few bullets in a border skirmish by the Rio Grande.

Of course, I wanted to know more. But I soon found that not a single book had been published about these daring suffragists and their incredible adventure. In fact, very little was known about this trip. So how could I dig up the information that I needed to tell this untold story?

When I talk to students about research, I ask them this question. I ask follow-up questions, too. (Was there TV a hundred years ago? How would people at the time have learned about this trip?) More important, though, I try to get them asking questions—the same kind of questions that I ask myself. Because I’m not there just to show them “what an author does” or to impress them with my skills as a history sleuth. I’m there to show them they can do it, too.

Let me repeat that: They can do it, too.

Not “someday.” Right here, right now. Students, teachers, retirees—anybody who can use the internet can unearth a story that has not been told before. Rediscover a forgotten pair of heroines. Re-examine what we think we know. Reevaluate the past. Change history.

This is extraordinary. It’s unprecedented. And it’s getting truer every day.

Around America to Win the Vote is a book that simply couldn’t have existed until very recently. To learn about Nell and Alice’s trip, I scoured historical newspaper databases like the Library of Congress’s Chronicling America. I found hundreds of articles from local papers all around the country, filled with anecdotes and colorful details: The farm horse in New Jersey who wouldn’t let them go by until they tied a suffrage-yellow daffodil behind his ear. The quiet road in Georgia where they suddenly found themselves in the midst of a circus parade—“red wagons, elephants, and all”—and so they raised their Votes for Women banners and tossed leaflets to the crowd. The vast, parched Arizona desert where the little yellow car sank up to its axles in the sand.

Before those articles were digitized, how would this research have been possible? I could have driven all around the country, following Nell and Alice’s trail, searching dusty archives in each town. But there was no record of where they had gone. Only by finding all those historical newspapers online, then combing through the articles for clues, was I able to map their route.

It’s exciting work, and fun. But more than that, it is essential. We need to seize this opportunity to open up these time capsules and check out these original sources for ourselves. Because the history that has been handed down to us is not complete.

Why were there “no great women” in so many fields? Of course, they faced overwhelming discrimination. But again and again, I have discovered in my research that despite the barriers, many more women than we realize did achieve great things and win success and fame—only to be later written out of history. 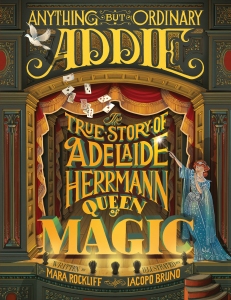 IGNORED: Adelaide Herrmann, the Queen of Magic, inspiration to a young Houdini but excluded from the history of magic for a hundred years.

ERASED: groundbreaking director Alice Guy-Blaché, whose wildly popular movies couldn’t be left out of early histories of film—so they were credited to her male underlings and other men she’d never even met.

If you see it, you can be it. How many more girls might have grown up to become band leaders, movie makers, or magicians if these women’s stories had been on their classroom shelves thirty, forty, fifty, sixty, seventy years ago?

Who can rescue these heroines and so many others who have been denied to us as role models? Only those with time and resources to travel and gain admittance to archives and special collections…until now.

Today, even elementary school students have easy access to a vast number of original sources. They can pore over old newspapers, examine black-and-white photos, read handwritten letters from before their great-great-grandparents were born. And they can ask themselves the kind of questions that I ask myself. Who was this woman? What did people think about her at the time? Why was she forgotten? How can her story help us with the challenges we face today?

It’s not too late to rescue our lost heroines. And if we do, maybe they’ll rescue us.

Mara Rockliff is the author of many lively historical books for children, including Around America to Win the Vote: Two Suffragists, a Kitten, and 10,000 Miles and Anything but Ordinary Addie: The True Story of Adelaide Herrmann, Queen of Magic. Previously, she wrote a Nerdy Book Club post about her experiences learning Esperanto with her daughter. Visit her online at http://www.mararockliff.com.

Want to help discover more great women? By the People is a Library of Congress program that invites volunteers to transcribe documents online, including thousands of suffragist papers, making them easily available to researchers around the world.

Like Loading...
← Thanks to Frances Perkins by Deborah Hopkinson THE ASSIGNMENT by Liza Wiemer: MAKE HISTORY – SPEAK UP! – Book Review by Aliza Werner →