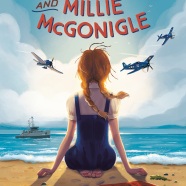 For my new book, War and Millie McGonigle, I committed grand theft. Fortunately, the victim is my husband and my ill-gotten goods are his memories of growing up on San Diego’s Mission Beach. For many years I’d heard his stories about the small colony on the bay side, long before it was dredged and Mission Bay became a popular resort. The warm water lapped at the sand when the tide was in. There was swimming and surfing, and children went without shoes from June until September.

Phil would row his small boat out to where the reeds and grass grew tall and read comic books until his nose was sunburned and his empty stomach growled. He watched seals tumble in the water and fished for perch and halibut.

At low tide, the beach was mud, pocked with pickleweed and eelgrass. Shoals and small islands, home to colonies of mussels and sand dollars that stood on end in soldier-like rows, were revealed. And early in the morning, Portuguese fishermen would be out catching the octopuses whose hiding holes the ebbing tide had uncovered.

The place was idyllic for Phil and even for me as I listened. I wanted to write about it, to put someone there to be nurtured and soothed by the tides flowing in and out, the fishy smell of the mud flats, the squawks of the gulls, the peace of the small waves on the bay, and the sparkle of the sun on the quiet blue water. Thus anxious, fearful, worried Millie was born. I thought she could be comforted and find strength and wisdom through simple things and the natural world.

The internet, newspapers, and many, many books and historical society publications helped me summon San Diego in 1941, but by far the most important and richest resource was traveling to Diego and walking on Bayside Walk in South Mission. I watched the waves on the bay, heard seagulls screech and waves break on the ocean side, and imagined the teeming mudflats that now exist only in Phil’s memories and stories.

I love Millie McGonigle the character. She’s a twelve-year-old girl with tides to watch and dead things to find, grappling with growing up, facing her fears, and navigating the changes that came with war. Millie is stubborn, brave, feisty, and funny. She’s part me, part my husband’s memories of growing up at the beach, and part every young person who faces fears and challenges with courage, humor, and a great deal of spunk. So Millie moved to South Mission Beach, San Diego, and you can find her and her story there.

Karen Cushman’s first book, Catherine, Called Birdy, was a Newbery Honor winner and her second, The Midwife’s Apprentice, was awarded the Newbery Medal. She was an adjunct professor in Museum Studies at ohn F. Kennedy University for 11 years, before retiring to Vashon Island, near Seattle, Washington, in order to write full time.

Like Loading...
← Ten Books that Encourage Teens to Speak Up and Speak Out by Kasey Short I Was Never Matilda by Louie Stowell →