Posted by CBethM on February 26, 2014 in New Book Reviews | Leave a comment

For anyone who has ever loved a fairy tale, Nikki Loftin’s Nightingale’s Nest resonates with magical realism. Based on the Hans Christian Andersen story “The Nightingale,” and born of the same spirit as Paterson’s Bridge to Terabithia, Nikki invites her readers along for the friendship journey of Little John, our hero, and Gayle, a magical nightingale embodied in foster child form. 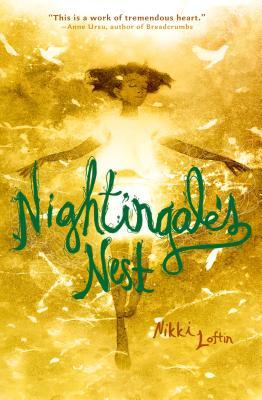 Little John, the 12-year-old narrator, befriends the ethereal Gayle. Gayle is living with a nasty foster family who cares less for her well being than their monthly check. She escapes to a tree on the property next door and builds a nest, which is where Little John finds her. The property is owned by the Emperor, Mr. King, the wealthiest man in town. Little John and his father are landscapers for the eccentric, and sinister, man.

Mr. King is powerful and he’s a collector. What does he want most? Gayle’s voice. It’s the purest sound the Emperor has ever heard. Gayle’s enchanted voice holds the power to heal those touched by her voice. Mr. King turns to Little John to help him lure the little girl into his home, where he can capture her voice. Still aching from the death of his sister, for which he feels responsible, Little John yearns to protect Gayle from the menacing Emperor while trying to provide for his own family, too. Little John’s family lives on the economic edge. His father drinks away the rent and his mother fights depression. So when the Emperor offers him $500 to convince Gayle to sing for him, Little John takes it. This fairytale story of a boy who chose the wrong path and then fights to get back on the right one will have readers enchanted. Loftin’s prose is both lyrical and raw, just like a nightingales.

Nikki Loftin is an author to watch as her second middle grade novel hits the shelves February 20, 2014. Nightingale’s Nest already made the 2014 Must Read List by GirlsLife.com. She is also the author of The Sinister Sweetness of Splendid Academy (2012), a modern day retelling of “Hansel and Gretel” which will have kids begging for a candy bowl of their own. It was recently released in paperback form.

I was lucky enough to read an ARC of Nightingale’s Nest last fall. I even passed it on to a dear friend in Ohio, who I knew would love the enchanted Gayle. I appreciated Loftin’s gritty description of abject poverty, and the difficult choices families face when living in survival mode.

I also read The Sinister Sweetness of Splendid Academy when it was released in 2012. A school which offers never-empty candy bowls and scrumptious meals became a tasty read-aloud morsel for my third graders.

In both stories, the layers and complexities of the characters are truly delightful. For me, the magical elements fueled a desire to revisit the original fairytales, which I did after each book. A great argument could be made to read them beforehand, too: “The Nightingale” and “Hansel and Gretel.” Happy reading!

Irene Kistler is a middle school librarian in San Antonio, Texas. One of her greatest joys is reading her library’s collection and recommending great books to kids. She loves to write and hopes to one day publish a picture book or middle grade novel of her own. When she’s not reading or writing, you can find her cooking a nice dinner for her husband and friends, or browsing the aisles of William Sonoma. Her specialties are lasagna and buckeye candies. Tweet her @IreneKistler and chat about books with her on Goodreads.

Like Loading...
← What Would Josephine Do? by Patricia Hruby Powell Celebrating Nerdy Book Club With a Fresh New Look →