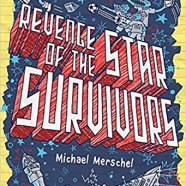 As a nerd, someone married to a nerd, and a mom raising three little nerds, I’ve always felt among my people at Nerdy Book Club. When I had the chance to read Revenge of the Star Survivors (Holiday House, April 2017) by Michael Merschel, I knew this was the perfect place to share it. It’s a title that will speak to a very particular kind of reader—one like my husband, who when we were dating once gazed at me with adoring eyes. “Whatcha thinking about?” I asked, aglow in the bloom of our new romance. “That one Star Trek episode where Captain Kirk and Spock . . .”

You know the type.

Star Survivors tells the story of the socially awkward Clark Sherman, an eighth-grader who plunks down at a new school he calls Planet Festus and quickly learns that these alien life forms aren’t so welcoming to galactic travelers like him. Clark has to navigate bullies, ineffective teachers, and a dangerous principal, but he draws inspiration from his favorite characters on a Star Trek/Star Wars-like show called “Star Survivors.” When Clark meets uber-nerd Les and savvy Ricki, both fans of the same sci-fi show and both of whom have to endure the same bullies, Clark begins to form a sort of resistance force.

Written as if a captain’s log, Star Survivors is at turns hilarious—“I lowered all my defensive screens and smiled in a way that I hoped emulated a young Harrison Ford. . . my voice rising to a pitch that probably sounded more Wookie than handsome rogue”—and heart-breaking—“Space is mostly emptiness. Days like today-it feels especially so. But the only way through it. . . is forward. Forward, guided by that one dim star. Right there. The one called . . . hope.”

I was interested to know more about Mike’s book and what went into, so I sent him a few questions. Below is our exchange. For teachers and librarians who would like their own copy of Revenge of the Star Survivors, Mike is giving away three free copies. Just comment below for a chance to win. And visit Mike’s website to learn more.

Question: In reading Revenge of the Star Survivors, I felt like you were reaching out to middle-school nerds everywhere and saying, “Hey, it’s going to be all right.” Who did you see as your audience when you wrote this? And what did you want them to take away from your book?

Mike Merschel: Yeah, you nailed it. One of the things that kept me writing and rewriting through the years was the memory of what it felt like to be an awkward outcast—the only one of my kind, an alien in a strange land. I got through because I had a lot of nice people—teachers, parents and eventually, friends—looking out for me. I know that not everyone is so lucky. And I know that some people can feel trapped in situations that make them feel helpless. Or worse.

So I wanted the book to be sort of a signal that said: “You are not alone. There is intelligent life in the universe. Hold on. You’ll find it.”

Q: Middle school is hard enough for even the coolest kids, let alone nerds of all stripes. But there is salvation in books. What were the titles that shaped or even saved you during these tough years?

MM: The book I loved the most was (and is) The Phantom Tollbooth. The jokes are so deep that I was still discovering new ones even into my 20s (and yes, I was still re-reading it into my 20s, and 30s, and beyond). It also contains an important lesson about taking on impossible tasks that has served me well.

(Case in point: When I finished that book, at age 12, I vowed that someday I would meet the author, Norton Juster. But finding information about him was just about impossible. About 30 years later, when I was finishing my book, Norton Juster actually came to my city, and I got to interview him. Not only that, the picture book he had just written, Neville, was about a new kid trying to fit in after a move—same as mine. He gave a speech that I got to quote from at the start of my book. I’m still amazed at how that all worked out.)

The book that affected me the most in those years, though, was probably the fourth book in Lloyd Alexander’s Chronicles of Prydain series. It’s called Taran Wanderer. The whole series is full of swords and monsters and magic, but Taran Wanderer is really melancholy and reflective. It’s all about a young man trying to figure out just who he is. I can’t talk about what he discovers without giving everything away, so let’s just say that at an age where, like the hero of that book, I was trying to figure out where I fit in—that book had an answer that made a lot of sense to me.

Q: Your main character narrates some of the scenes as a captain’s log. How much fun did you have while writing this book? How much did you draw on your own middle-school years?

MM: “Fun” and “my own middle-school years” might be mutually exclusive ideas … OK, not entirely. But like my narrator, Clark, I did move to a new city in the middle of the school year. I was scrawny and awkward and, unlike Clark, kind of mouthy. Which made me a human tractor beam for bullies. It also worked like a deflector shield when it came to getting girls to talk to me.

But part of the way I found my tribe was through geekdom. A mutual love of things like Star Wars, Star Trek and science fiction books defined who we were. This was in an era when being a fan of those things set you apart from the crowd. (Especially if you were the kind of guy whose favorite T-shirt said “SPOCK LIVES” and you wore it to school as often as possible … did I mention that I had a lot of trouble getting girls to talk to me for some reason?)

Anyhow, in many ways, the book is a novel-length love letter to all those influences, and a celebration of the people who became my friends because of them. The people Clark meets are entirely fictional, but he, Ricki and Les are people that my friends and I would have enjoyed playing D&D with.

I think the most fun I had in creating the book was writing the references to Clark’s favorite TV show, Star Survivors. Star Survivors is a mash-up of a whole lot of shows, so I got to write things that I hope are closer to homage than parody—which is kind of hard, because a lot of the plot summaries of those shows do actually read like parody now. (It’s possible that some of the sillier-sounding summaries are the ones that stay closest to the original episodes.)

But I did have this going for me: When the writing was going poorly, I got to spend a few hours with some favorite DVDs in the name of “research.”