Cover Reveal of You Don’t Know Everything, Jilly P! by Alex Gino

Twelve-year old Jillian Pirillo, the white, hearing main character of You Don’t Know Everything, Jilly P!, loves peanut butter and jelly sandwiches, the Magical Mysterious Vidalia fantasy book series, and her family, including her Deaf baby sister, Emma. She also thinks Derek, a Deaf Black kid in her Vidalia chatroom, is kind of cute. She makes plenty of mistakes and microaggressions in chatting with Derek, but also starts calling out the racism and ableism she sees in the world and her family. And when a Deaf Black girl at Derek’s school is killed by police, it’s time for Jilly to figure out what it really means to support her grieving friend.

I grew up with Deaf grandparents on my fathers’ side and I spent many young weekends at the Staten Island Deaf Club, which was filled with raucous laughter, music pumping loud enough to shake the floor, and American Sign Language everywhere. I grew up knowing that being Deaf is a source of pride and not to be pitied but also that Deaf people are marginalized by an audist culture that expects everyone to hear.

I also grew up in a white liberal home, and we didn’t talk much about racism. As if it was a bad thing that other people did, or used to do. As if it wasn’t something that affected me, and certainly as if it wasn’t something I engaged in. Except that’s not true. I’m white in America, and I was raised in a culture steeped in racism. I benefit from my white skin. I wrote Jilly P! as a tool to spark conversations in white families like mine who don’t talk enough about race and racism. So many books are unconsciously written for white readers. Jilly P! is a book for all audiences, but consciously written as a tool for white hearing folk to examine and talk about our privilege. I worked with a number of sensitivity readers for this project, including four Deaf Black ASL users, to minimize the use of tropes and faulty representation in this book, but I remain open to conversations as this book releases into the world.

When it comes to covers, designer Maeve Norton had tough shoes to fill. I mean, the cover of George, my first book, is amazing. I can spot her binding from across a crowded library. And yet, Maeve was up to the challenge. I absolutely adore the cover for Jilly P! Just look at it!  Need I say more?

I probably don’t, but I will.  I love how the image focuses on the space between Jilly and Derek, and how the reader is immediately drawn into that space. I love that Derek’s hearing aid is red, and that Jillian’s earring is blue. (I can only imagine how many ears Maeve had to draw to get them just right.) I love that Everything is practically in italics. And I love how it matches with its big sister George without being repetitive. The cover for You Don’t Know Everything, Jilly P! is a delight, and I couldn’t be more excited about it, or the book inside. 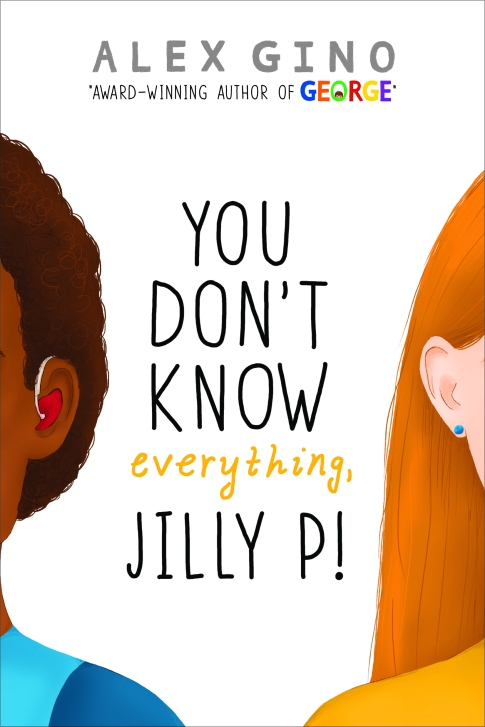 Alex Gino loves glitter, ice cream, gardening, awe-ful puns, and stories that reflect the diversity and complexity of being alive. You Don’t Know Everything, Jilly P! is their second novel. For more about Alex, please visit http://www.alexgino.com.

Scholastic is generously giving away galleys of You Don’t Know Everything, Jilly P! to 20 commenters on this post. Leave a comment to gain a chance to get your hands on this book!