Reaching the Kids Who Need Us Most by Shannon Hitchcock 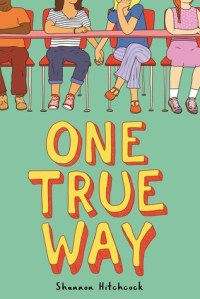 Every book has a journey. ONE TRUE WAY’s journey began in 2014 at the National Council of Teachers of English (NCTE) Convention. I got up early to hear my editor, Andrea Pinkney, speak on a diversity panel. The librarian/moderator said what she really needed were more Middle Grade books that dealt with homosexuality. She went on to say that’s the age when same sex feelings emerge, but there are very few books available. I knew immediately I wanted to write such a book, one that would bear witness to my best friend’s story.

When we were in our early twenties, a person I love came out to me. I have never been more shocked in my life. Her coming out went something like this:

“I figured it out in second grade, but you weren’t looking for it.”

“Are you absolutely sure? Maybe you need some counseling.”

My friend and I were both raised in conservative churches, and the message we’d received was that homosexuality was a sin. My friend didn’t want to be a bad person. Nobody would, so she tried to change herself, and when she couldn’t, she tried to hide. Finally, her secret had spilled out.

I wish I could tell you that my shock receded and I immediately embraced her, but I didn’t. We spent weeks crying and yelling at each other. After one such meeting was over, my wise husband said to me: “You either have a best friend who’s gay, or you don’t have a best friend anymore.” His comment was like being slapped. It stunned me into silence and pushed me toward acceptance.

When something in my life doesn’t make sense, I’ve always turned toward books, and the book that helped me understand my friend is ANNIE ON MY MIND. As I read the love story of Liza Winthrop and Annie Kenyon, it didn’t matter to me that it was about two girls. I recognized those emotions—the thrill of first love and sexual awakening. This—this was how my friend felt, even if she couldn’t find the words to tell me.

I wondered if I could write a book like ANNIE, but one whose content would be appropriate for middle schoolers. A book that would help kids realize a crush is a crush. That whether the crush is between two girls, two boys, or a boy and a girl, the feelings are the same. The difference is in society’s perception—a perception that’s often colored by religion.

For every book I write, I contemplate the questions, Is this my story to tell, and what do I bring to the table? In this case, I brought religion. In ONE TRUE WAY, Samantha Johnson belongs to a church that teaches homosexuality is a sin, while Allie Drake belongs to a more accepting Methodist church. Yet even at Allie’s church, the official position is that homosexuality is a sin. It’s a position that the United Methodist Church is still debating to this day.

I started my research by reading WHEN CHRISTIANS GET IT WRONG by Adam Hamilton. His theology made sense to me, but I wanted to talk to my minister. The Reverend Vicki Walker and I had never spoken about homosexuality before, but I knew from the way she welcomed everyone into our church that she’d be sympathetic. Vicki pointed to the chair I was sitting in and said, “You have no idea how many parents have sat where you are, struggling to accept their gay children, and how many children have sat in the same seat, afraid of disappointing their parents.” Vicki went on to say, “Your book will save lives.” That seemed like a huge responsibility, one a more famous author should take on. Could my book really be that important to a gay kid out there somewhere? I didn’t know. I still don’t know, but Speakforthem.org states that “suicide is the leading cause of death among gay and lesbian youth nationally.” I have to be an ally, and I hope you’ll be one too.

Because ONE TRUE WAY is a book of my heart, I’ve been worried about its reception. The political climate in our country gives me even more cause to be concerned, but an endorsement from Kathi Appelt, and a starred review from Kirkus, have eased my mind a little. Kathi says ONE TRUE WAY is “an important story that shines a bright light,” and Kirkus calls it “compelling and honest.” I repeat those words like a mantra. They give me hope that copies of ONE TRUE WAY will be there for the kids who need it most.

About ONE TRUE WAY:

It’s 1977, and girls who like girls are forced to question their choices. ONE TRUE WAY is a story that widens the heart and sheds lights on what it means to be different while at the same time being wholly true to oneself.

Through the lives of two girls and the influences around them—a small town, neighbors, teachers, and family—we come to see that love is love. Set against the backdrop of Southern history and politics that surrounded gay rights in the 1970s, this novel is a thoughtful, eye-opening look at tolerance, acceptance and change.

The ALAN Review hailed Shannon Hitchcock as, “A New Voice in Historical Fiction.” She’s the author of the Crystal Kite award-winning novel, THE BALLAD OF JESSIE PEARL, and a second novel, RUBY LEE & ME, a nominee for the 2017-18 Nebraska Chapter Book Golden Sower Award, Pennsylvania’s Keystone Award, an Iowa Children’s Choice Award, and Japan’s Sakura Medal. Her third novel, ONE TRUE WAY is forthcoming on February 27, 2018.