Posted by CBethM on August 6, 2019 in Author Posts | Leave a comment

“She died of the Spanish flu, leaving nine children behind.” “He boarded a boat in Derry after his younger brother joined the Irish Republican Army.” “She was a maid like all the other Irish immigrants. They called them Bridgets.”

For lots of people, history is boring and gray-toned. But for me, it’s always been colorful and alive and deeply personal, like the stories my grandparents told about witnessing the 1918 flu epidemic and emigrating from Ireland in 1923. And with the books I write, like the historical fantasy Cape: Book 1 in The League of Secret Heroes series (Simon & Schuster/Aladdin), which publishes today, I try to show kids that history has a beating heart. And that there are people walking around among us today who lived through fascinating times or who can provide an incredible window into significant, defining moments.

In researching and writing Cape and its sequels, Mask and Boots, I was interested in what was known as “The Golden Age of Comic Books” during World War 2. The stories feature three comic-book obsessed kids who discover they have superpowers. As I sketched out the plot, I started thinking about the real-life women of the time who were using their own superpowers to do heroic things themselves.

Immediately I started digging up information about the “human computers” of the war: brilliant women mathematicians. Their mad skills were used to calculate trajectories so that soldiers in the field could calibrate their weapons when battling wind and rain, as well as Nazis. Six fiercely intelligent “computers” were asked to put their skills to work on a top-secret project that came to be ENIAC, the world’s first electronic general-purpose computer. ENIAC is the computer that all our laptops and desktops can trace their DNA to, the one that started it all.

ENIAC stood 8 feet tall and stretched 80 feet long, was built in the basement of the University of Pennsylvania’s Moore School, and needed somebody to make it work. The six female mathematicians were asked to use their considerable talents to operate the hunk of metal. They did, and with each step they wrote to make it run, they were performing something that had never been done: programming.

While the tech field remains male-dominated, the ENIAC Six show us that women were there from the very start. I wanted to showcase their role in computer history, so I read all I could about the six women, focusing most on Kathleen “Kay” McNulty Mauchly Antonelli and Jean Jennings Bartik. When I read all I could, I watched documentaries, like Kathy Kleiman’s meticulously researched ENIAC Programmers Project. And wanting to know even more, I reached out to their children to hear their stories about these remarkable women — not only as history-makers but as human beings.

The earliest computer programmers were women, including Kay McNulty Mauchly (with bike) and Jean Jennings Bartik, who served during WW2 on the ENIAC — the first electronic general-purpose computer.
Photo courtesy of Mauchly and Bartik families

“She would say, Math is a game with numbers. Engineers play all day. Why let men have all the fun?” Jean’s children told me. They and Kay’s children shared wonderful details about their moms — from Jean’s “fire-engine red hair” to Kay’s knack for bungling a joke. “As a kid she liked jumping fences,” one of Kay’s children said, “as a grownup career girl she would jump over trash cans lined up on Walnut Street on the way to the train.” What a fantastic approach to life: Kay never let obstacles get in the way of where she was going.

With books two and three in the series, women code-crackers, spies, and pilots will feature. And we’ll learn more about one of the darker moments of American history, Japanese internment camps and how the U.S. government locked up its own citizens. To learn more about all these parts of history, I read books and firsthand accounts documenting the events, but I wanted to know more about how it impacted children. So I reached out to people who could provide personal perspective.

Former Chicago resident Suzy Nakamura talked to me about her mother, Sada Yasuda, who was imprisoned at the Minidoka War Relocation Center in Idaho as a teenager. Suzy’s mom kept detailed scrapbooks and yearbooks from her time behind barbed wire from 1942-45 — showing how a precocious girl kept busy amid unjust circumstances. Turning the pages of those books, Suzy pointed out how Sada, who was voted “cutest in class” at the camp high school, wrote not only her own poetry but also wrote her own sick notes to miss school! 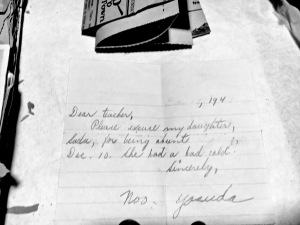 A note Sada used to get out of school, from Sada’s scrapbooks, 1942-45. Photo courtesy of Suzy Nakamura

Another fellow Chicagoan Keith Uchima has written about his mother’s experiences at Manzanar War Relocation Center in the California desert. Ruth Chiyoko Yoshida-Uchima entered at age 14 and, Keith pointed out to me, “had the same concerns as any 14-year-old in Chicago.” She kept busy with sports and friends and school work. “Her generation was shielded from the horror and loss of rights and freedom by their parents in the generation above,” Keith said. Adults made sure that children in the camps filled their days with softball and baseball games, dances and movie nights — the things most American kids typically enjoyed. Why? Because they were American kids themselves.

In reading about the women pilots of WW2, I decided to attend a reunion of the WASPs (Women Airforce Service Pilots) at Avenger Field in Sweetwater, Texas. There I met the children who were so proud of their moms, these barrier-breaking pilots. And I was lucky enough to be introduced to 97-year-old Jane Doyle, of Grand Rapids, Michigan, who herself was part of the WASP class of 1943. Jane agreed to let me interview her for the book series, and she shared her scrapbook and incredible stories about flying and what it was like to serve her country. When it came down to it, Jane was a young woman who, plain and simple, just wanted to be in the air. “I thought I was an angel looking down at the earth,” she said. “I loved it. And I couldn’t wait to get back up again.”

Jane passed away a few months after our interview. I am incredibly grateful that I was able to speak with her about her experiences pushing society’s expectations for women. In showcasing these historical figures and pointing out the connections to real people who experienced history firsthand, I hope young readers will be able to look around their own communities and make the connections to family members and neighbors.

The lessons I hope kids take away from Cape is that heroes were once children in classrooms, too, with dreams and hopes. That they developed their special skills as they grew up, and went on to use them in significant ways. And that every one of us has the potential to break barriers and reach new heights — and perhaps make history ourselves.

The author with Jane Doyle, a WASP pilot during WW2. Jane passed away in February of this year at age 97.

Chicago children’s author Kate Hannigan writes fiction and nonfiction, and especially loves mining history for remarkable people whose stories deserve to be told. Honors for her historical fiction The Detective’s Assistant, about America’s first woman detective, include the Golden Kite Award for best middle-grade novel, California Young Reader Medal honor, Booklist Editors’ Choice selection, and Nerdy Book Club Award Winner. Her picture book biography A Lady Has the Floor: Belva Lockwood Speaks Out for Women’s Rights spotlights barrier-breaker and early suffragette Belva Lockwood, who fought for the rights of girls and women in classrooms, courtrooms, and the ballot box. It was a Society of Midland Authors honoree, a Junior Library Guild Selection, and a Bank Street College pick. When Kate isn’t reading, researching, or chasing down her dog, she likes to spend time with her busy family. You can find her online at KateHannigan.com.

Like Loading...
← RESEARCHING THE REMARKABLE GWENDOLYN BROOKS by Suzanne Slade The Book That Readers Built by Chris Van Dusen →