Home » Author Posts » Sharing the Inspiration Behind My Next Novel, BRAVE LIKE THAT (and the fantastic cover!) by Lindsey Stoddard 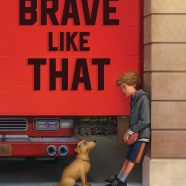 Sharing the Inspiration Behind My Next Novel, BRAVE LIKE THAT (and the fantastic cover!) by Lindsey Stoddard

When I was ten I found a stray dog in the woods behind my house. She had no meat on her bones and no collar on her neck and she tucked her tail and took off when she saw me. I named her Jen and spent the afternoon calling for her as if she were mine. And just before I had to go in for dinner, I saw her peek out from behind a tree, so I squatted low, reached out my hand gently, and she came to me. I brought her home and we took her to the vet and I remember to this day how protective I felt of Jen, how much I wanted to take her home with us. But we already had a dog, and no space for another, and Jen’s belly was full of puppies. I visited her at the humane society until they found her, and her six puppies, a home.

Finding Jen was the seed for my upcoming middle-grade novel, BRAVE LIKE THAT, the story of Cyrus, the adopted son of a Minnesota firefighter, who falls for a dog that shows up on the very firehouse step where he was left eleven years ago as a baby. Cyrus’s dad is a local football legend, and even though Cyrus plays, he doesn’t like it, and hasn’t since they switched from two-hand-touch to full-tackle. He’s just not brave like that. Brave like his dad. But, with the help of stray-dog Parker, his fierce grandma, and a tight-knit group of girls he meets at the humane society, Cyrus must find his own kind of courage to take on some big issues in his life as he begins middle school.

It’s a story about being the real you, even when your lifelong friends are starting to act more like bullies, even when you don’t want to make the team you’re supposed to make. Even when you’re not sure what kind of brave you are.

BRAVE LIKE THAT has many other real-life inspirations. It’s set in Northfield, Minnesota, the small town where I attended college, and where in 1876 brave bank clerk, Joseph Lee Heywood, refused to open the safe to Jesse James and his bank-robbing gang, and the townspeople rallied together to chase them out.

The book is also an homage to my own grandma who, when I was young, suffered a stroke and lost her voice forever. She was one of the bravest women I know and I was so happy to give Cyrus someone like her, someone who saw right down in to the core of him.

It also shines a light on the important work teachers are doing by sharing stories with children. Cyrus’s teacher participates in #classroombookaday, a real-life, inspiring initiative started by Jillian Heise. Mr. Hewett shares a different picture book every day with Cyrus’s class and the results are life-saving.

I am thrilled to share the cover for BRAVE LIKE THAT, a gorgeous image by artist Macky Pamintuan of Cyrus and Parker in front of the firehouse where they were both found. I can’t wait see it on shelves June 2nd. I hope it inspires kids everywhere to be find what’s deep down in them, follow their own music, and stand up with big loud NOs when things feel wrong. 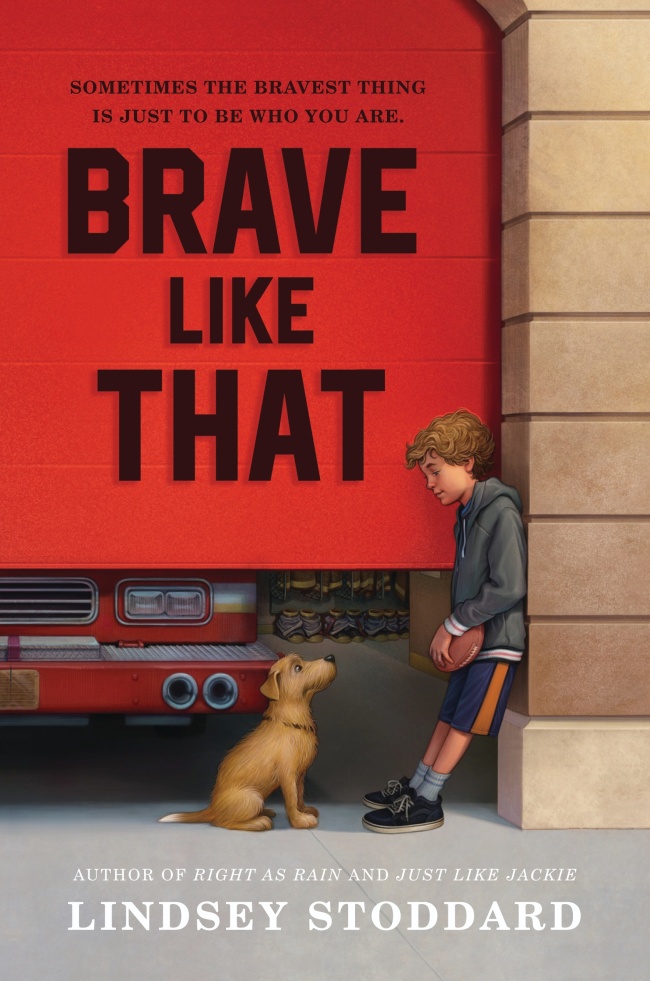 Lindsey Stoddard is the author of the acclaimed novels Just Like Jackie and Right As Rain. She was born and raised in Vermont, where she loved to play in the snow and ski, learned to boil sap in her grandpa’s sugarhouse, and began her lifelong love of reading. Lindsey always wanted books to be a big part of her life, so when she graduated college she moved to New York City, where she taught middle school English for ten years. She loves reading and writing with middle schoolers, hiking on the Appalachian Trail, and Ben and Jerry’s ice cream. She received her MFA in Writing for Children and Young Adults at Vermont College of Fine Arts. She now resides back in Vermont with her husband and two children.

Like Loading...
← The Books My Students Are Reading by Colby Sharp Anxious Charlie to the Rescue by Terry Milne →