Unchildrening the Children by Beth Kephart

Something terrifying happens when people in power don’t steal away to the shade beneath a tree (or a corner in a house, or a private place inside a plane), open the pages of a good novel, and read. When they don’t train their brains on the lives of others. Don’t put themselves in the place of characters. Don’t follow a complex story through its many complexities. Don’t stay just where they are, turning those pages, because they genuinely want to know what will happen next to characters who are not them, characters who issue forth with their own fates and choices, with their own names.

For example: On October 8, 2017, Donald J. Trump issued a letter to the leaders of the House and Senate exulting in his immigration policies—reforms he described as “necessary to ensure prosperity, opportunity, and safety for every member of our national family.”

Family. That was the word. A tone-deaf choice if ever there was one.

Reform number one, as Maria Woltjen, the executive director and founder of the Young Center for Immigrant Children’s Rights recently wrote in a New York Times Op/Ed, related to that pesky, porous southern border, where more miles upon miles of wall, Trump indicated, were (by his calculation) most desperately needed.

Reform number two focused on immigrant children and the (apparent) immediate need to abolish the protections these “tempest-tost,” to quote Emma Lazarus, had historically been given.

Seven pages of  “reform,” and the ambition of crushing young lives received proud penultimate billing. Because, you know: family.

Today a coronavirus is surging, the global economy is crashing, world leaders are blocking Americans from traveling to their countries, protesters are filling the streets demanding long-overdue reforms, and still Trump and his team remain focused, as the Young Center outlines in its new report, on fracturing families: “During the administration’s Zero Tolerance policy, the government separated nearly 4,500 children from the parents. Its stated motive: to deter families from seeking protection in the United States.”

Seemingly interested in no one’s story but his own, seemingly incapable of imagining beyond himself, Trump has blithely vanquished the hope and health of the undocumented young by burying them alive inside a category. Inside slogans, campaign promises, a screed, many screeds. He has made of individual lives an exceedingly indiscriminate blur, unchildrening the children who travel toward this country with the hope of finding family or of one day building one.

At the Young Center, Woltjen and her colleagues do their work by recognizing the power of the particular. They serve the young “fleeing violence, trafficking, abuse and extreme poverty” by ensuring that those young are not quashed, suppressed, compressed, or vanquished inside obliterating categories. 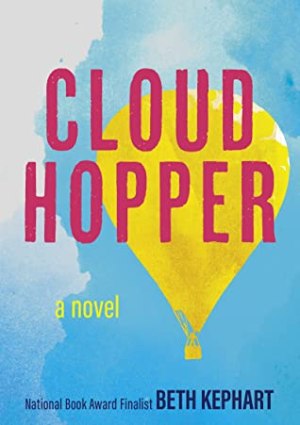 They crouch down so that they might hear: A child’s name. A child’s story. A child’s fear.

They ask, they wait, they listen.

They guide, they hope, they fight—one utterly specific child at a time.

No one story the same. No one future identical. No one complexity any less important than another’s.

In writing Cloud Hopper, a middle-grade novel in which undocumented teens teach American teens about the stories that are theirs and no one else’s, I turned to Woltjen so that I might gain a greater understanding of what undocumented children endure in our country, if indeed they can endure our country, at times like these. This is what the children face, Woltjen told me, drawing a picture. This is who the children are, she said, telling stories. This is how the children may yet be helped between the lines of the current administration.

This is the story.

War is an absolute failure of the imagination, as Adrienne Rich said, and so is the unchildrening of children, the Trumpian unwillingness to stop, to look, to see, the Trumpian inability to read the world as one might read a book—in search of telling details and empathy-expanding specificity. In fiction and in life the details matter. In power and in practice justice begins with a proper noun, a child’s name, the combustion of callous, insensate categories.

Beth Kephart, the author of more than thirty books, looks ahead to the September 2020 release of Cloud Hopper from Penelope Editions, Penny Candy Books. More at bethkephartbooks.com.